Africa Is a Country Radio continues its literary theme for its third season on Worldwide FM. This month we have a very special guest mix from Folarin Ajibade aka folarinistired, a Lagos-bred DJ, academic, and radio show host based in Brooklyn, NY.

Folarin presents a mix of classic kwaito from South Africa inspired by the book Kwaito Bodies by Xavier Livermon. Since it kept with our theme of music inspired by literature inspired by music, we decided to have our first guest mix on the show. Folarin’s description:

This mix is heavily inspired by Xavier Livermon’s Kwaito Bodies, an extensive ethnography of kwaito music and the larger sociocultural ecosystem of performance, politics and pleasure that it has fostered in urban South Africa. My own introduction to kwaito was through the group, Boom Shaka, whose musical stylings and aesthetics Livermon’s work helped me contextualize. They feature in this mix along with other pioneers of the genre like Doc Shebeleza, Trompies, and M’du. Also included are songs by Penny Penny (Papa Penny) and Nozinja, innovators of Shangaan Disco and Shangaan Electro, two of the multiple genres that have originated from kwaito. My choice to close out with an edit of “Ngunyuta Dance” by the Detroit legend, Anthony Shake Shakir, is a nod to Livermon’s conception of the “re-mastered” afrodisaporic nature of kwaito. Here we hear a Black American rework a Shangaan Electro tune inspired by South African Kwaito, a hybrid genre which was itself conceived from the interaction between house, hip-hop, r&b, dub, marabi, imibongo, kwela, and bubblegum music. For me, this recording embodies what I find most captivating about the genre—its capacity (like many other forms of Black music) to hold seemingly disparate sounds in a harmonious embrace.

Listen in to hear Folarin’s mix and a discussion about his journey as a DJ and academic. We kick off the show with a short exploration of the latest musical craze to come out of South Africa, amapiano.

Listen below, get the tracklist on Worldwide FM and follow us on Mixcloud.

Africa Is a Country Radio continues its season focused on African club culture. Our next stop is Johannesburg with South African journalist Sean O’Toole. Listen here and on Worldwide FM. 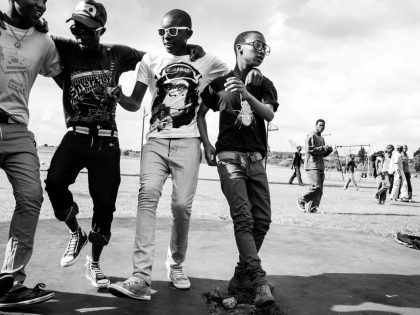 The photographer Krisanne Johnson believes you can learn many things about a country by the way youth live—from fashion to music to home environments.