Sound Sultan—the stage name for the legendary Olanrewaju Abdul-Ganiu Fasasi of Naija Ninja (how his brand and label was known)—has saturated social media since July 11th when he succumbed to death at the age of 44. Sultan was born in Jos, Plateau State, the fourth born in a family of five. He was vastly talented and his passion for arts encompassed other mediums such as acting, comedy, songwriting and playing guitar, among others. He had performed widely and won awards for his songs that enriched people’s minds and created a space for them to ponder critically on societal happenings and events, especially in Nigeria.

In Sound Sultan’s songs, the theme of political consciousness is cardinal. Spanning years of intimidating musical successes, his songs capture, beautifully, the plight of the masses and their quotidian frustration and grievances at the Nigerian government and their multiple ways of cheating the people. Also, Sultan’s insights permeate through the choice of the themes he engaged with, and his use of language (the blend of Yoruba and English) he deployed to present these songs. For example, released in 2020, “Faya Faya,” which featured Duktor Sett, is a sublime piece of a musical work that depicts the unsettling condition of the country and the longing for hope by the masses. The image of fire portends wanton destruction and unrest happening in the country. Deftly rendered with a voice that carries despair and weariness, “Faya Faya” enables us to grieve our collective yearnings; our dying dreams and aspirations. The use of refrain in some of Sultan’s politically inclined musical offerings stresses the extremity of the problems bedeviling the citizenry. The repetition of “pana pana” lends credence to the futile years of waiting for leaders to douse the fire of postcolonial problems that include corruption, political instability, needless killings, unemployment, etc. In the song, Sultan sings:

While we are waiting for a miracle

Here, the image of chaos is portrayed through these incisive lines. Years after electing new leaders, their promises of change become mirages. This monumental failure appears disturbing, as the masses become thirsty for the phantom promises of the elected. In recent times, Nigeria has become a craggy hill for activists and people who crave the desired changes from the government. In October 2020, the Lekki Tollgate Shooting (as part of the #EndSars protests) sparked critical reactions in the country. The tragic event triggered a global realization of the recklessness displayed by our security forces to combat the perpetual killings of the citizens by SARS (a police unit notorious for its abuse). Apart from this, the ravaging effects of attacks masterminded by Fulani herdsmen across the country has raised serious concern about the safety of the citizens. In furtherance, the song highlights the weapons of tribalism and religious polarization used in dividing and creating discordant tunes among the masses.

In another song titled “Ole (Bushmeat),” released in 2011, Sultan berates the thieving leaders and their gimmicks in milking the country dry. His angst is more pronounced, as he lashes with lines that describe aptly the looters and their insatiable quest for our collective resources. Describing the retrogressive state of the country and the evils perpetrated by its elected leaders, Sultan offers us a memorable song that bears the weight of our collective grief. Revolutionary in style, the song evokes years of looting and the mismanagement of public funds that plague the country. The image of the bushmeat and the hunter represent the citizens and the leaders. The hunters (the leaders) prey on the masses (the bushmeat). Again, the refrain—“Ole”—threads the song. This portrays Sultan’s creative ingenuity and prowess in capturing the terrible happenings in the society without forgoing the poetic flavor that embellishes his work. In “Ole,” he sings:

See them fly for the aeroplane
remember all the pains my people dey maintain
I don tire to dey explain
pikin wey never chop dey complain
water light na yawa
everywhere just light no power
only power na the one wey dem
dey use oppress us.

These lines reinforce the oppressive system engineered by the leaders in Sultan’s homeland. Through this song, we become attuned to the sufferings of the people and the privileges enjoyed by the leaders. The gap between the poor and the rich becomes more visible. For example, typical of our leaders’ ritual is flying abroad for medical intervention, while the masses patronize ill-equipped hospitals that double as a slaughterhouse for those who dread the possible deaths of patients in these hospitals. Worthy of mention are the potholes that garnish our roads, while the leaders travel through air to other countries.

Sultan’s musical trajectory continues to guide us through his penchant for the unflagging engagement of societal decadence and rot that inhabit his homeland. In “2010 (Light Up),” featuring M.I. Abaga, his overwhelming anger at the Nigerian leaders prevails. “2010 (Light Up)” confronts the leaders with their failure to provide a stable electricity power supply for the masses. Through this song, Sultan revisits the promises made by Nigerian leaders and how the drought of political accountability ravages the country. He sings:

It is noteworthy to state that “2010 (Light Up)” remains one of the most politically reverberating songs in the country. Sultan’s attempt at deracinating the Nigerian populace from the locusts devouring their minds is commendable. The metaphor of Moses leading his people to the promised land deployed by Sultan is befitting. Sadly, his homeland murders those who rise against the tide of revolution. The Moses is hung at the gallows or buried somewhere unknown, while the systemic annihilation of messiahs never ceases. Evaluating the political history of Nigeria, the emergence of the anguish of dashed hope becomes an inevitable reality. One comes face-to-face with the sad stories of the likes of MKO Abiola and the annulled election of June 12, 1993; Ken Saro Wiwa and his fight against oil spillage in Ogoni land, and Dele Giwa and his assassination by unknown killers via a bomb parcel. The deaths of these people accentuate the tragic end of every Moses rising to change the mind-wrenching narratives of postcolonial trauma in Nigeria. Sultan sings:

Show my people dem
to the promised land
But then I noticed something o
People wey try am don dey underground
I see dem I ja.

Furthering in his indefatigable quest for a utopian homeland, Sultan laments about the ineptitude of the Nigerian leaders and their colossal failures in other verses in this song. Voyaging through the other mind-stirring verses in this song, the revolutionary tropes that render the song a masterful work become more visible. Sultan sings:

The mention of Fela Kuti is symbolic and timely in this song. Opening the untreated wound of socio-political problems in Nigeria, Fela’s politically poignant songs come to mind. Like Martin Luther King and Malcolm X’s speeches that capture the struggle for black freedom in the United States and on the African continent, Fela’s songs were and still instrumental to instigating the masses against the political weevils burrowing their petals of dreams. He battled with the cankerworm of bad leadership and outright violations of rules of law in his homeland through his songs. He dissected national issues and portrayed through his songs the enormous turbulence created by military leaders and their immense suppression of human rights. He called for the liberation of Nigerians—the common men, the market women, the dying children, the bedridden retired people, the forlorn ones whose means of survival are deprived.

Fela died in 1997, but the Nigerians’ problems remain unsolved. Sultan’s revolutionary voice echoes through the song as he says ‘Rise up, Naija/Raise your apa.’ Sultan’s disdain for tyranny and oppression reflects in this song. His scathing criticism of the leaders’ toxic use of power enhances our understanding of how corrupt and ineffective the system is under the government. In “Naija Jungle,” released in 2018, Sound Sultan still delves into his usual description of the problems affecting the country, and how the bourgeoisie persist in their familiar way of oppressing the proletariats. The uneven distribution of wealth reflects in the verses of the song too. In addition, the song reminds us of George Orwell’s seminal book titled “Animal Farm” and Beautiful Nubia’s “The Small People’s Anthem.” In both aforementioned references, the masses suffer greatly, while the leaders amass wealth at the expense of depriving the masses the basic amenities that will help them survive. Instead of contributing immensely to the progress of the society and the people, the leaders watch the people wallow in abject poverty. Sound Sultan sings:

Some dey look, some dey work

Some dey talk, some dey chop
Some dey live on the roof
While some sleep on the ground
Some dey work all the work, while some chop
Till belle full for ground

In other verses in the song, there is the portrayal of the jungle Sultan attempts to explore. This kind of jungle is characterized by injustice and punishment melted on the masses. It is a jungle that offers no respite, and the lives of its inhabitants are vulnerable to untimely death. In this jungle, people die because they are weary of waking up to the ache of lamenting about the worrisome state of everything. This kind of jungle is sinister, and only those who can endure the aches will survive. It is a jungle named Nigeria, and the people there are dying.

The Nigerian dream is to leave Nigeria

In Nigeria, to be an emigrant is to possess illustrious social capital and a badge of honor that is not only reserved for you, but also for your family. 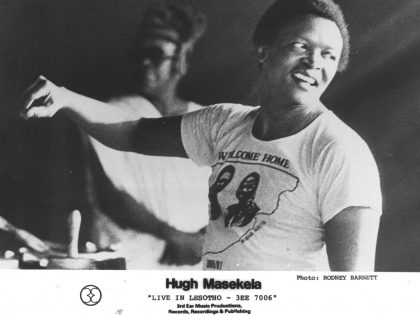 Music is the weapon

During Christmas 1980, Hugh Masekela and Miriam Makeba performed at a concert in Lesotho that deeply challenged and disturbed South Africa’s apartheid regime. The record of that concert is being reissued.