In response to a query that sought his thoughts on Bob Dylan’s controversial Nobel Prize win in 2017, Wole Soyinka quipped: “Since I’ve written quite a number of songs for my plays, I would like to be nominated for a Grammy.”

Soyinka is popularly known for a number of remarkable things: he is the first African Nobel laureate; he carries an iconic white fro; he is the protestor who once held up a Nigerian Broadcasting Corporation studio at gunpoint; and more recently, he is that old professor who was asked by a young man to vacate an airplane seat. But in addition to being a Nobel-winning-author, Wole Soyinka, much like his late cousin Fela Kuti, made political music.

For a time in his mid-20s, Soyinka was a cafe singer in Paris. Two decades later, back in Nigeria, he wrote a two-track album named Unlimited Liability Company. Although much of the singing was done by actor and musician Tunji Oyelana & His Benders, Wole Soyinka’s voice also features on both tracks. This musical endeavor was an extension of his artistic activism from the page and stage to wax. His knack for sarcasm—as embodied in the poem “Telephone Conversation,” or in a play like Madmen & Specialists—is restated on Unlimited Liability Company. The LP, released in 1983 by Soyinka’s production company, Ewuro Productions, was a satire of the Nigerian political elite, headed at the time by Shehu Shagari. Just as much, it was a critique of the military regimes that preceded and succeeded Shagari.

Side A of Unlimited Liability Company features the LP’s title track (which is more commonly known as “Chairman”). The main singer addresses a gallivanting chairman whose directors and managers are mismanaging things back at home; “each time they sneeze, millions of Naira go scatter.” (It is hard to not think of how similar this gallivanting chairman is to Nigeria’s current president, who barely ever does any sitting at home).

On side B is “Etike Revo Wetin,” more popularly known by the tongue-in-cheek phrase that makes the song’s chorus: “I love my country.” The singer here narrates the nation’s peculiarities to the listener. For example: “in this my nation, all is free // to starve to death, you don’t need a fee.” The record turned out to be commercially successful in Nigeria, in the 1980s. (DJ Cuppy remixed this song for her debut single, “I Love My Country”).

Altogether, the LP runs just under half an hour of indirect condemnation of a political elite and its corruption, oppression, and bottom-line disregard for the lives and well-being of citizens.

Two Nigerian writers, Helon Kabila and Teju Cole, have stated that Soyinka is perhaps better known to the ordinary Nigerian for his political activism than for his play writing. They are arguably right. On YouTube, a certain B. Ibhas, commenting on a clip from “I Love My Country,” wrote: “… this […] musical side of Wole Soyinka is little known.” Ibhas is certainly right, which is why it should be better known that in Wole Soyinka’s oeuvre of sociopolitical critique, there is a long-playing record called Unlimited Liability Company. 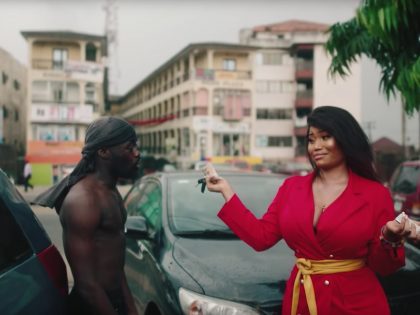 Why I’ll keep talking to South Africans about race

While Nigeria’s class divide is not between rich whites and poor blacks, it still has a lot in common with postapartheid South Africa.

Last month Johannesburg filmmaker Akin Omotoso, who directed a documentary about Nigerian Nobel laureate Wole Soyinka, flew to Lagos to attend the launch of Soyinka’s political party, The Democratic Front for a People’s Federation, and …

Today “The Guardian” published a hysterical interview with Africa’s first Nobel literature winner, where he accused British Muslims of being breeding grounds for terrorists and then unfavorably compared them to the American Nation of Islam. He …