Though born and raised in the Afrikaner stronghold of Pretoria, 62 kilometers to the north, Ivan Vladislavic is a Johannesburg writer down to his bones. He has pantomimed that city’s ebbs and flows for thirty years, beginning in earnest with his 2001 novel The Restless Supermarket and its view from the rapidly “Africanizing” neighborhood of Hillbrow in apartheid’s aftermath. Critics bemoan the gap between the respect he commands among those in the know and his enduring relative unknownness, but in this sense his career reflects the setting that shapes it. Vladislavic’s work, like Joburg itself, is tricky to inhabit, thwarting attempts to settle in through clear paths to understanding. It fosters a sense of always hovering just outside the action, as readers grasp at moving parts that don’t quite make a whole. To his credit if not with the result of great popularity, Vladislavic is a master of estranging himself in order to tune into his surroundings.

The apparent focus of his latest book, The Distance (published by Penguin Random House in South Africa; US Edition forthcoming from Archipelago Books), is a Pretoria boy’s fixation on Cassius Clay as he becomes Muhammad Ali. It is narrated as a back-and-forth between two brothers, Joe and Branko, who chronicle their lower-middle-class white childhood with neither nostalgia nor self-centering regret: it was what it was, more for the worse than the better. The Distance jumps from their mutedly violent past to more artful and even “woke” Johannesburg present using a set of Ali scrapbooks as springboard, thereby introducing key elements from two earlier Vladislavic works. The first, Portrait with Keys, is a loosely autobiographical 2006 compilation of short texts about the so-called city of gold, and offers a template for the formal and thematic splicing that drives The Distance. The second is his 2011 novel Double Negative, whose investment in the complementarity of photo and text reappears now as a give-and-take between making and interpreting the scrapbooks across time frames. “Forty years later,” Joe explains of his present task, “these books are spread out on a trestle table beside my desk as I’m writing this. Let me also confess: I’m writing this because the scrapbooks exist.”

As with so many Vladislavic lines, it is a wonder that his meta-awareness does not tip over into gimmick. It avoids this trap by laying out a clear purpose for its readers: we are meant to combine and re-combine the various elements that bring any place into composite being, and whose sundriness is especially noticeable in South Africa’s biggest and most bustling city. This is different from mere deconstruction. Every “data set” in the book—newspaper clippings, photographs, vignettes—can be interspersed with any other to arrive at a slightly different but no less revealing way of charting South Africa’s past. The scrapbooks, for example, are described as an “archive” whose meaning is unstable, but not as one that is ultimately meaningless. Vladislavic is in some sense a “choose your own adventure” epistemologist. And in large part, the mixing and matching on which The Distance relies is also a way of re-creating its characters’ memories from afar. “While boxing in general did not appeal to me,” Joe recalls, “my interest in Muhamad Ali was all-consuming. I might have forgotten the full extent of it, as we forget so much of what we thought and did in the past, had it not been for the archive of cuttings.” The clippings that recreate Ali’s legend also lead back to a forgotten past. A father reading a newspaper in his armchair; its local classified ads and Cold War headlines; the mother knitting in the next room to hold the scene together.

Unlike any number of other white South African writers, though, as they try to make sense of a past that they should not have had, Vladislavic imbues such recollective acts with neither poignancy nor pathos. His self-distancing takes the place of paralyzing self-interrogation, and this is his greatest virtue. There are many things more interesting to Vladislavic than the experience of someone like Vladislavic, and he is constantly attentive to other routes through the text that any momentarily chosen one precludes. All of the Ali clippings have a literal flipside of the violence taken for granted in the South African boyhood setting of their first, real-time encounter. As the brothers trade-off their narration, local stories appear as section headings to form a series of grim historical footholds: “Krugersdorp—Two African mine workers died after an accident in the West Rand Consolidated Mine near here yesterday.” Or, a bit later and with more context, “A story on the back of a cutting catches my eye. It’s about two mineworkers who died in a rockfall at Westonaria Gold Mine.” Such arid descriptions of death are set off against the bloody play-by-plays of sports journalists describing Ali’s legendary fights.

One reading that suggests itself here is that a white kid in Pretoria sublimates his awareness of the violence all around him into a fixation on a violence that is contained, and so lends itself to poetic description. In comparison with the glumness of being taught by a headmaster who delights in beating his pupils, the artistry of Ali’s punches is an escapist fantasy. With this as a point of entry, The Distance becomes a book about South African sports writing as a genre and historical institution. Joe describes, for example, a “four-part series” in the Pretoria News by the sportswriter Alan Hubbard, which gives Ali’s 1972 fight against Al “Blue” Lewis in Dublin a theatrical sheen. “Said Hubbard,” Joe writes, “On stage every day at Croke Park, Muhammad Ali is giving a matinee performance as a big, black Buttons. (Hubbard was referring to the servant in the Cinderella panto who always insults the ugly sisters.)” Another possible reading is that Ali’s global stature depended on the same racial capitalism that underwrote apartheid, a textual experiment in scalable exploitation. Following this thread leads straight to discussion and in one case, filmic representation of the Marikana massacre in the book’s present tense. Both routes to making sense of The Distance are defensible, along with a good many others. Vladislavic’s achievement is to present them all within the same narrative space, while nonetheless forcing our attention to discrete continuities. From this, paradoxically, a map to understanding Johannesburg’s felt discontinuity can arise.

The timeliest dimension of The Distance, with quarantined readers likely to be steeped in their virtual enclaves of choice, is its suggestion that Vladislavic’s quintessentially “Joburg form” anticipates the challenges of the Internet. He guides us through a bevy of media with more or less immersive properties, from newspapers through television straight up to present-day infomania. The adult Branko observes of his 1970s childhood that “South Africa was not the best place from which to observe developments in the mass media,” which, in turn, meant that “In the absence of television, sport was still news rather than spectacle.” By the time he is forced by family tragedy to take over stitching the Ali scrapbooks into some sort of narrative cohesion, his online immersion has made it feel like a lost cause. “Days go by,” he admits. “I’m drawn in by the cluttered sidebars, the insistent pop-ups, the pictures, the tips, the lists. Especially the lists. The 10 Sportsmen You Didn’t Know Were Born With A Cleft Palate. The 5 Best Ways To Lose That Stubborn Fate On Your Midriff.” And on and on for a thick paragraph of nothing, before confessing, “I can’t tell where one thing stops and another starts. It all bleeds. It’s a bloodfest.”

These, then, are the stakes of riding Vladislavic’s multilane highway to now: violence meets quiet, action edges toward observation, and personality gives way to place. But where The Distance, like Portrait with Keys before it, asks that the reader build links across and between planes of memory, history, and city, the virtual world with which the book’s past collides is discomfitingly edgeless. Vladislavic is an auteur of this moment of collision. Always hovering just askew of the city he loves, his is a voice for making new spaces within it. 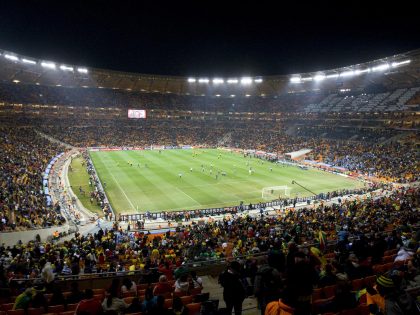 Soccer came to Ghana with “a Jamaican educationist.” That’s the popular version. It’s not entirely correct. 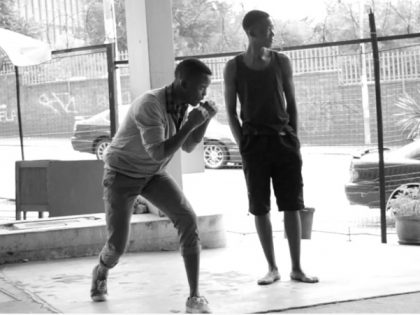 Our video department went to train at the Hillbrow Boxing Club in downtown Johannesburg. 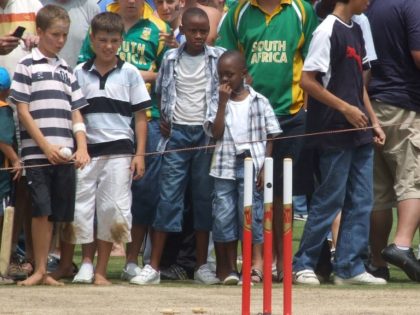