As Kwame Anthony Appiah cites several times in his book Lines of Descent: W. E. B. Du Bois and the Emergence of Identity (2014), Du Bois liked to quip, when asked how to define Blackness, that “The black man is a person who must ride ‘Jim Crow’ in Georgia.”

The appeal of this anecdote is its wry pithiness, which stands in contrast to the enormous political and intellectual energy Du Bois dedicated to the question of race. It was a lifelong project. But Appiah identifies 1892 as being particularly important in the development of Du Bois’s thinking. In July of that year, Du Bois boarded a steamship to Europe, where he would study at Friedrich-Wilhelms-Universität (what is today Humboldt University) in Berlin. His semester didn’t begin until late October, so he took his time with stops in Rotterdam, Düsseldorf, Frankfurt, Cologne, and elsewhere. To be on a fellowship in Europe was prestigious. To be in Germany specifically was to be exposed to an intellectual vanguard of the time. Du Bois had received his bachelor’s degree from Fisk University, a historically Black institution in Nashville, Tennessee, and he went on to earn a second bachelor’s degree and MA in history at Harvard. The plan was to complete his PhD in Germany, though he ultimately left without a degree due to residency requirements. He went on to become the first African American to receive a doctorate from Harvard University.

Appiah recounts this brief, but formative, period in Lines of Descent with the purpose of discerning the intellectual wellspring of Du Bois’s later writings on race, Pan-Africanism, and the Black experience more generally in such works as “The Conservation of Races” (1897), The Souls of Black Folk (1903), and Dusk of Dawn (1940). His prolific scholarship and his range of political commitments—including his attendance of the Pan-African Conference in London (1900); cofounding the Niagara Movement (1905); cofounding the National Association for the Advancement of Colored People (1909); and co-organizing the series of Pan-African Congresses beginning in 1919—have defined what it means to be an activist-intellectual. Appiah argues that this longevity of involvement reflects the lessons Du Bois internalized while studying in Berlin.

More specifically, his German education illuminates the sources of his race-thinking and its turn against scientific reason of the time to a sociohistorical understanding. In Appiah’s words, “Du Bois was America’s last romantic… [his] arguments were tethered to the varieties of racial romanticism and postromantic thought that he took from Germany’s intellectual traditions; they were kin to the ideas through which Germany sought to define itself as a nation among nations.”

Du Bois’s fascination with Germany was not unusual—several of his professors at Harvard, including William James and George Santayana, had either studied or spent meaningful time there. However, unlike his teachers and white peers, his time in Berlin gave him his first experience of freedom from American racism. His two years in Germany enabled him to see the American situation of race from a removed standpoint—a condition of racial exile similar to that pursued later on by Richard Wright and James Baldwin, who lived as expatriates in France. Though European racism was not absent, Du Bois had a freedom of mind and body he would experience in only limited ways in the future, including visits to Liberia, Sierra Leone, Senegal, the Soviet Union, China, and eventually Ghana. “Germany was the first place where Du Bois experienced life without the daily cruelties and public insults of racism,” Appiah remarks. Du Bois himself, as quoted by Appiah, more plainly stated, “this was the land where I first met white folk who treated me as a human being.”

Du Bois also encountered a vibrant intellectual milieu, one that sought to produce academic knowledge with political implications. The industrialization of Europe during the nineteenth century had created social and economic inequalities across the continent that drew the scrutiny of scholars. Gustav von Schmoller, an economic historian and founder of the Verein für Sozialpolitik (Association for Social Policy), was one of Du Bois’s teachers who believed that scholarship could be “both dispassionate and engaged.” As Appiah further elaborates, Schmoller and his colleagues “didn’t think that the ethical could be excluded from historical studies, not least because the development of the ethical was itself a historical phenomenon.” This proactive approach and its effect on Du Bois would later gain expression in The Philadelphia Negro (1899), Du Bois’s first work of sociology, in which he wrote with power and without hesitation:

If in the hey-dey of the greatest of the world’s civilizations, it is possible for one people ruthlessly to steal another, drag them helpless across the water, enslave them, debauch them, and then slowly murder them by economic and social exclusion until they disappear from the face of the earth—if the consummation of such a crime be possible in the twentieth century, then our civilization is vain and the republic is a mockery and a farce.

Du Bois consequently grasped how the “Social Question” (Soziale Frage) in Germany could inform the “Negro Question” (Neger-frage) in the US—not only in terms of framework, but in terms of analysis. Schmoller and other members of the Verein were critical of ideas that attributed social progress to either “timeless natural laws” or the result of pure individualism—positions held by members of the emergent Austrian School of economics, which would go on to influence neoliberal policies of the late twentieth century. For Schmoller and those aligned with him, social classes and communities mattered. Political pressure and state responsibility were equally indispensable. This critical historicism intersected with Du Bois’s concurrent embrace of an earlier set of thinkers associated with German Romanticism—in particular, Johann Gottfried Herder, whose concept of the spiritual character of nations (Volkgeist) deeply impacted his thinking. The notions of “striving” (streben) and “soul” (geist) would later surface in The Souls of Black Folk. This intellectual eclecticism further contributed to the stylistic blending of the personal and the social in Du Bois’s writing, which Appiah describes as his signature combination of “soaring, rhapsodic poeticism and dry, assiduous empiricism.” It also informs the tension between explaining social facts and understanding subjective experience as tacitly captured in Du Bois’s forceful question from The Souls of Black Folk: “How does it feel to be a problem?”

These intellectual influences Du Bois encountered in Berlin ultimately contributed to his sociohistorical definition of race, which was positioned against the scientific reason of the time. He was not alone in his belief that there was no correspondence between race and mental aptitude. Franz Boas, the German-born anthropologist whose work demonstrated his own antiracism, had left for the United States from Berlin only a few years before Du Bois arrived. Du Bois later invited him to deliver a commencement address at Atlanta University in 1906, after Boas had become a professor at Columbia University and Du Bois had attained a professorship at Atlanta. Beyond agreement on the pseudoscience of race, both were united on the issue of culture. As Appiah writes, “cultural transmission” became a central feature of Du Bois’s approach to race. But more than this was the role of politics. Appiah addresses how Du Bois’s recurrent engagement with race and its definition did not exclusively comprise “an attempt to reflect the existing reality of race” but also constituted “an attempt to call his own race to action.” “Du Bois moved on from the biology and the anthropology of the nineteenth century,” Appiah concludes, “but he never left its world of idealistic ethical nationalism.”

Appiah ends Lines of Descent by maintaining that the academic debates and intellectual traditions of Germany continued to influence Du Bois’s thinking. By extension, they have continued to have bearing on our approaches to race in the present. It is worth mentioning that there are curious omissions in Appiah’s discussion. The Berlin Conference (1884-85) and Germany’s colonies in Africa are missing, leaving uncertain how Du Bois felt and responded to this larger political context while in Berlin. German thinkers who go underexamined or unexamined entirely include Georg W. F. Hegel, Karl Marx, and Friedrich Nietzsche. Du Bois’s promotion of an elite “Talented Tenth” to lead the African-American community can be interpreted as echoing Nietzsche’s idea of the Übermensch. Marx had a more conspicuous imprint, as seen in the Marxist analysis of Black Reconstruction (1935), Du Bois’s travels to the Soviet Union beginning in 1926, and his eventual membership in the communist party at the end of his life. Hegel’s racism toward Africa is touched upon too briefly.

Nonetheless, Appiah’s argument for the cosmopolitanism of Du Bois’s education and how it informed his project of defining Blackness without resorting to monocausal explanations of science, history, culture, or political status remains significant. As Appiah’s title insinuates, the color line was not the only line to influence Du Bois’s thinking. The method of social constructionism that Du Bois pioneered was the result of his engaged research imagination and his creative interweaving of multiple intellectual strands. As with Pan-Africanism, academic ideas and the narratives that emerged from their exchange could “bind people together,” granting Du Bois a world and freedom of mind he would not have experienced otherwise. 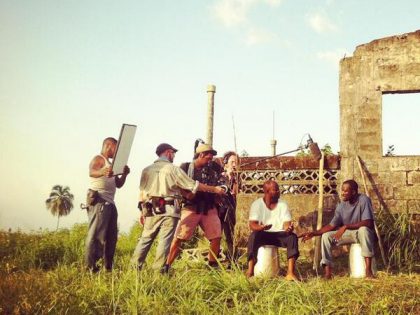 This is not your conventional film about Liberia

Most films about Liberia are feature films or gritty documentaries focus almost perversely on the horrors of the civil war. Not “Out of my hand.” 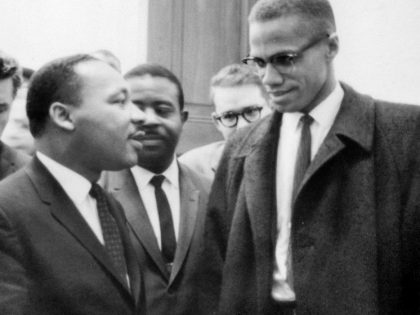 When Malcolm X went to Africa