In 2012, the video “Kony 2012” by the American organization Invisible Children went viral on YouTube. It was the first video to reach one million likes, and has today reached over 100 million views. Through the video, Invisible Children (IC) wanted to bring worldwide attention to Joseph Kony, the leader of the Ugandan rebel group the Lord’s Resistance Army (LRA). In doing so, it wanted to help end the LRA conflict—which at that point had been going on for more than 25 years. This conflict between the LRA and the Ugandan government had brought much suffering to the civilian population of Northern Uganda. The LRA had abducted civilians on a large scale, and many had also been forced into camps for displaced people.

While the video was quick to draw worldwide attention, it also drew a lot criticism. In order to appeal to a large audience—particularly teenagers—the Kony 2012 video presented the complexities of the war in a slim-downed narrative. Many viewers felt uncomfortable not only with the way the conflict was simplified but with the solutions it suggested. I myself have been quite vocal in my criticism having worked on the conflict for over 18 years. I criticized the dubious, exaggerated, and sometimes incorrect causal relations and information, meant to simplify the conflict and inflate Invisible Children’s role in stopping it. Teju Cole wrote perhaps the most shared critique on the video: a particularly powerful essay critiquing the “white saviorism” of the video, in which Africa merely “serves as a backdrop for white fantasies of conquest and heroism.”

In mid-November, the documentary The American Crusade in Africa was released, and screened on Arte (France and Germany). It builds further on the above criticism. Seven years after Kony 2012, the investigative journalist Jean-Baptiste Renaud revisits the story by looking at what happened with Invisible Children, and the (US) military action against the LRA. In doing so, it repeats some of the issues which have been uncovered over the years, such as the links between Invisible Children and the Ugandan military, or the human rights violations of the Ugandan military in Northern Uganda. It also brings some fascinating new elements, such as the American cultural attaché in the Central African Republic (CAR), which turns out to have been working for a diamond company. Also the footage of the UPDF incidents in CAR is rather shocking—it is a shame both issues were not explored more.

Yet, other than that, the documentary has a number of fundamental problems. While the documentary intends to unmask the simplification of the Kony 2012 campaign, it unfortunately suffers itself from similar problems: it strongly simplifies the realities on the ground, presents dubious causal relations, and withholds essential information. Let me present a number of examples.

First, a major claim of the documentary is that Invisible Children swindled the funds raised through the Kony 2012 money, and that it never reached the affected people. A serious accusation, which the documentary proves through excerpts of an interview with former IC Uganda director, Jolly Okot. Concretely, the latter says that, “after Kony 2012, they told us there’s no more money, and that we had to close the office.” She continues, “it did hurt me, it was our story, used by others.” Powerful quote, but is this the whole story? Context is needed here, which is not provided by the documentary makers.

In brief: the Ugandan section of Invisible Children was very unhappy with the way in which an increasing amount of the organization’s funds were going to the Democratic Republic of Congo and the Central African Republic, and no longer to them. The LRA had left Uganda in 2006, now organizing its activities—and harming the population—in DRC and CAR. IC leadership however decided that—given the ongoing LRA violence and higher humanitarian needs in DRC and CAR—proceeds should mainly flow to the newly affected areas. This decision was strongly contested by IC Uganda, who claimed that the profits of the Kony 2012 campaign should primarily go to them because the conflict and organization started with them. This situation worsened when IC’s funds started to run out, and they reoriented themselves as a humanitarian (rather than advocacy/development) organization, largely focusing on DRC/CAR. Eventually, this led to a rupture in the organization, with the Ugandan branch no longer being a member of IC.

The quotes of the former IC Uganda director have to be understood in this context: they illustrate IC Uganda’s frustration with the organization’s focus on the DRC and CAR—they considered the IC LRA story as “theirs.” This, of course, is a very different story than what the documentary suggests, i.e. that IC and Kony 2012 were a conspiracy to misrepresent and swindle money from the LRA victims. Either the makers were not aware of the broader story, or they chose to leave that out, in both cases, the reliance on a non-contextualized or properly researched single source is problematic in any discipline or format—whether it is a documentary film, academic work or human rights report. In doing so, the makers purposefully ignore an essential part of the story, which did not fit their narrative.

A second major claim of the documentary is that the US military were not there to hunt the LRA and Joseph Kony, but for other reasons. While it has been shown that the US military were there because of internal US pressure rather than a concern for people in the affected areas, the documentary takes these critiques one step further: it basically argues that the US troops have never been hunting Kony, for the simple reason that they were in a completely different area. To be more precise, the documentary argues that the US troops were stationed far from Kony, who was in Darfur/Kafia Kingi—600 km apart from each other. This is another very strong claim, but is it also true? Yet again, this is a simplification, or even falsification, of reality. One, Kony wasn’t fixed in Kafia Kingi: while he did spent longer periods there, he was mobile, roaming around the region, also in the areas monitored by US military and the African Union Regional Task Force (which, by the way, are not mentioned once in the film). Second, the US military also were active around and in Kafia Kingi: together with the Ugandan military. For example, they launched a raid on Kony’s camp in March 2013. Why wasn’t this mentioned? Again, this is a very different story than what the documentary claims. Also here, either the makers didn’t know this, or they purposefully chose to leave it out. Both are problematic, as these are central points for the arguments they are making.

I could continue with other issues which were equally problematic—for example, the fact that the Sudanese support to the LRA is not mentioned once, while this was central to the existence of the LRA, and the suffering it caused. Instead, the documentary focused on much more dubious claims which are presented as “truth.” However, let me instead reflect on some broader and more important questions raised by The American crusade in Africa.

In a powerful essay, Ethiopian-American novelist Dinaw Mengestu critiques the self-centered logic of Kony 2012, arguing powerfully how “the doctrine of simplicity is always at war with reality.” Rather ironically, this is where Kony 2012 and American Crusade meet; the latter claims to unmask the simplification of the former by equally resorting to simplification. As was rightly pointed out in a Twitter discussion on this issue, both films, American Crusade in Africa and Kony 2012, are therefore different sides of the same coin: of seeing Africa as a continent that is an object either of “Western” benevolence (Kony 2012) or “Western” malevolence (The American Crusade in Africa). Yet, both views ignore complexities, messiness and context, which would make for a much more nuanced—and ultimately more helpful—story. It is clear why this is not done: nuance and context get much less attention—or better, less clicks, likes and shares—than ideologically straightforward messages. And indeed, The American Crusade in Africa viewing figures are not less than impressive. After just over a week, the German version had attracted over 215,000 views on YouTube, and generated a lot reactions: on social media, the claim has led to much hatred against IC (just have a look at the reactions on YouTube to see how the video is understood).

To conclude, with this piece I don’t aim to support Invisible Children, or Africom (the structure organizing the US military in Africa): I have criticized these a lot, and will continue to hold their work to utmost critical scrutiny. But, what I want to defend is that when criticizing an organization or action, the organization and context need to be taken sufficiently serious; nuance and complexity should be key. Otherwise reporting mirrors the issues it wants to criticize, and ultimately harms the broader cause it claims to defend.

The (Im)possibilities of Ugandan patriotism

To say we are “allies” would be to delude ourselves into thinking that some of us are safe. We are not safe. 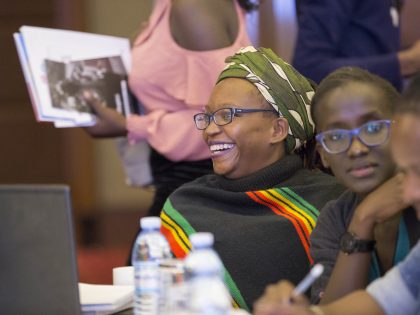 A poem about the president gets you jailed in Uganda

The charge is “misusing a computer.” Dr. Stella Nyanzi remains incarcerated to this day in Luzira Women’s Prison.