In May 2011, the then-President of Ghana, John Evans Atta-Mills, declared at the annual convention of the Pentecost Church of Ghana: “Christ is the president of Ghana,” and that he owes no one any apologies for the statement which, according to him, is his “guiding principle as head of state.” Atta-Mills’ statement at the time collapsed the complex religious composition of Ghana—which includes Islam, traditional African religions, and those who identify as atheists among others—and essentially proposed Christianity as Ghana’s national religion.

Atta-Mills’ utterances underscored the political dominance of Christianity in Ghana since its introduction by Europeans during the slave trade and under colonialism, but also how, as a religion, it has been deployed to define citizenship and deny basic human rights—especially in respect to LGBTQ people. The very beings of LGBTQ in Ghana are decried and derided as “un-African” and a western import. At the lead of anti-LGBT groups are a set of organizations that vehemently advocate for the preservation of “proper” family values in Ghana.

Front and center is the National Coalition for Proper Human Sexual Rights and Family Values, a tripartite coalition made up of the Christian council, Catholic secretariat, Catholic Bishops Conference, Ghana Pentecostal and Charismatic Council, the Muslim community and traditional rulers. It was founded in December 2013. These organizations, despite their historical differences, unify in opposition to the rights and freedoms of LGBTQ people.

Founded in December 2013 by Moses Foh-Amoaning, the coalition is fiercely anti-LGBTQ. On its Facebook Page, Foh-Amoaning declares: “I may lose some friends over this, but homosexuality is a sin.” He is citing Leviticus 18:22, a Bible passage often quoted by homophobes to support their views that homosexuality is abominable.

What has particularly drawn the ire of the coalition is the decision, in September 2019, by the Ghana Education Service (GES) to introduce a new sexuality education policy. This policy, which is supported by United Nations Educational, Scientific and Cultural Organization (UNESCO) and the United Nations Population Fund (UNFPA), incorporates gender, human values, and sexual and reproductive health and rights perspectives into the current curriculum of primary schools on sexuality education. According to the director of the GES, the policy will facilitate “positive attitudes, open-mindedness, respect for self and others, non-judgmental attitudes, and a sense of responsibility concerning their sexual and reproductive health issues.” On a sociocultural and political level, sexuality education programs are crucial because they also touch on human rights, gender equality and empowerment, and have been shown to enhance “young people’s knowledge of gender and social norms.”

A wave of LGBTQ-phobia—mainly under the guise of protecting children and preserving family values and couched in such rhetoric—followed the announcement, with anti-LGBTQ organizations complaining that the policy would “legitimize LGBT identification.)” Organizations like the aforementioned National Coalition for Proper Human Sexual Rights and Family Values, the Christian Council of Ghana (CCG), and the Ghana Pentecostal and Charismatic Council (GPCC) interpreted the content of the policy as “legitimizing LGBT identification.” The President of the Ghana Pentecostal and Charismatic Council (GPCC), Paul Yaw Frimpong-Manso, referred to the policy as “Comprehensive Satanic Engagement.”

No surprise that evangelicals and conservatives outside Ghana, especially from the US, chimed in. Last month, the African Family and Sustainable Development Summit, a two-day conference supported by the US-led network called The World Congress of Families (WCF), was held in Accra. The WCF has connections to white supremacist, anti-LGBTQ, and Islamophobic organizations.

To make sense of the current anxieties around rights-based sexuality education in Ghana, however, it is important to situate them in a history that produced the current discourses and attitudes on what constitutes family values. In 1961, the Christian Council of Ghana (CCG) established the Committee on Christian Marriage and Family Life (CCMFL) “to promote positive Christian teaching on sex, marriage and family life.” Some of the projects pursued by the CCFML included youth outreach programs that introduced Ghanaian youth to “proper sexual behaviors.” The projects, funded mostly by the Christian Aid, an organization based in Britain, pursued the Christian marriage and family life projects in some parts of Ghana. Their execution not only transplanted Euro-American ideas of “proper” family values onto indigenous ideas of gender, sexuality and desire, but also radically redefined them. Letters exchanged between the Christian Council of Ghana and the Christian Aid between 1965-1975 expose how some politicians and clergy relied on funding from Britain and other European nations to circulate western notions of the heterosexual family and monogamy.

Evangelical groups like the WCF, based in the US—a country with a violent history of racism—repeats these dangerous liaisons by supporting organizations like the National Coalition for the Preservation of Proper Human Sexual Rights and Family Values. The WCF’s recent conference in Accra exemplifies its links to the coalition, provoking what the Zambian theologian Kapya Kaoma calls “the global cultural wars.” In the midst of these cultural wars, some Ghanaians make the questionable claim that heterosexuality is authentically African while supporters of LGBTQ visibility view homophobia as a phenomenon imported to Africa from the west.

If the history of the relationship between Christian Aid and CCG has taught us anything, it is how the meanings of gender, sexuality, and marriage shift over time. It is critical, then, that we situate these conversations in the contexts of complex histories. Such a pursuit prompts us to ask how feminist and LGBTQ movements in Ghana can become the vehicle for envisioning a future in which “preserving proper family” values does not become an alibi for the rape and violent abuse of girls, as the veteran Ghanaian journalist Elizabeth Ohene’s recent exposé demonstrated? How can such collaborations dismantle the virulent male supremacy that allows gender-based abuse to continue? In a country where Christianity has become the reason for indefensible actions like scapegoating members of the LGBTQ community, duping the poor, infirming the sick, and targeting ethnic and non-Christian minorities and the country’s most vulnerable people, it is clear that our communities and broader society needs fundamental moral, spiritual and political restructuring.

While many African Christians can only imagine a white Jesus, others have actively promoted a vision of a brown or black Jesus, both in art and in ideology. 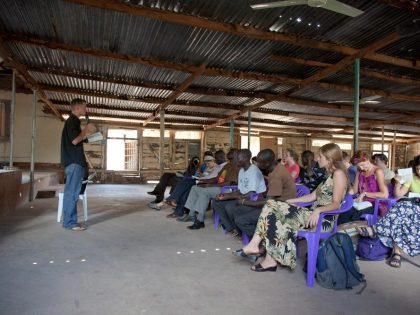 From Kansas to Kampala