Binyavanga Wainaina owed much to Nairobi, the Capital city of Sheng. He soaked himself in Sheng, a mixture of KiSwahili and English, and was transformed by it. Not that he was ever fluent in it. Rather his curiosity about the language, its style and its subculture, propelled him as the founding editor of Kwani? (a term borrowed from Sheng) to publish more than a few pieces of writing in Sheng. My point, here, is that owing to Nairobi’s sonic landscape (its song, and lyric), Wainaina embodied the poetic and the profane.

Wainaina’s nini could be named profane: the red tutu he wore for his TEDxEuston talk, and the red pocket kerchief to match; the double colored hair he wore in blue and red; the makeup and white gown he wore to the Africa’s Out Gala in New York City; and the full length red silk or wax caftans he wore (often without trousers underneath) on numerous occasions. While religious leaders and other zealous people would find these looks shocking, they were, in truth, no more shocking than the live stage performances of Congolese musicians Yondo Sister and Tshala Muana during the 1990s. Wainaina’s nini came from somewhere. His fashion sensibility was as premeditated as his writing. He adopted Nairobi in form and disposition. I was in awe of his fashion, not because I found it shocking, but because there was, in it, a radical stylistic will.

Born in the early seventies to an estate-owning family in Nakuru, the former capital in Western Kenya, Binyavanga, a child of affluent parents, was soft. He wore his heart on his sleeve. He read novels. He cooked a lot, and was an exceptional host. Yet with this profile, he had the uncanny ability to code switch from British mannerism to the Sheng poetics he would learn and absorb in Nairobi.

In “Discovering Home,” Wainaina writes about hearing Congolese Soukous with his mother and the feelings he locates within it: “The voices pleaded in a strange language, men sending their voices higher than men should, and letting go of control, letting their voices flow, slow and phlegmy, like the honey.” This statement showed his desire, evoked in the sweet (male) voices, and the sense of “letting go of control.” He would let go and reveal his homosexuality publicly twelve years after he published the story.

The seductive quality of this music—of the Tshala Muana’s, the Pépé Kallé’s  and the MBilia Bel’s—perhaps was meant to foster the loss of control at the level of consciousness. On account of intoxicating rhythm and the sweetness of the voices within it, Wainaina’s writing style strove for the same. Taunts, woos, pleas, purrs. He became a master of the sweet tongue. Wainaina also wrote, “Invest your love Madonna.”

Tshala Muana is one example of those whom Wainaina described as possessing, “voices as thick as hot honey, and wayward.” I recall that after Muana’s 1995 concert in Kampala, Uganda, religious leaders protested against her “indecency.” The gyrating of hips during her concert caused pastors and deacons to wrestle with their flock. This moral abrasion was synthesized in Wainaina’s writing, seen as not merely profane, but sensuous. Congolese music, in his words, effected the body. His descriptions of sensuous movements in dances like Ndombolo, are a testament to Wainaina’s strong stylistic sensibility, and his willingness to practice on the page, what had been seen, in dance, as profane and wayward.

Despite the city’s intense development, such as the Kenyatta International Conference Center built in 1973, and the World Bank-assisted expansion of Jomo Kenyatta International Airport in 1978, Nairobi remained, at heart, a city of great improvisation. Even as it became a hub for development organizations, and global business, Nairobi stayed true to its radical beginnings. In the 1920s, more than half of the property of the African quarter was owned by women. These founders built their own; created their own architectures. Many others for decades to follow, including the author, would emulate this example.

Wainaina’s sense of the profane and the poetic as well as his waywardness can be read in his essay on artist Wangechi Mutu published on the occasion of her 2014 solo exhibition, Nguva na Nyoka, at Victoria Miro. Here, it is his playfulness in using an alphabetic order that appears poetic; while the description of female circumcision among the Kikuyu, is relayed as profane. “She is D, Delirious. She is I, Irresistible. She is S, Super Sexy. She is C, Such a Cutie. She is O-O ooo. They would have considered, the New Christians, cutting your clitoris for Anti-Colonial reasons in the 1920s.”

For Wainaina, the precariat, too, was profane. “A Japanese cow would be a middle-class Kenyan,” Wainaina once wrote commenting on the insanity of development figures and analytics that sought to universalize global income per person across the West, the East and the South. His enduring fuck you to the World Economic Forum revealed a boldness that I have come to associate with the Watu wa Nairobi.

His writing style echoed profanity through desire, and its riskiness and precarity. Wainaina once wrote about the Eastleigh-based muralist and painter Joga for The East African. By asking, “Is this what globalisation is? That even our own image ceases to inspire us?” Joga’s work is critiqued for its aspiration towards “Angry America.” The precariat in Wainaina romanticized Joga’s precarity as something desirable. Seeing no limits to desire, place, nor circumstance.

Referring to the Mbilia Bel’s, the Pépé Kallé’s, and the Kanda Bongo Man’s, Wainaina wrote, “I have struggled to get this dance right for years. I just can’t get my hips to roll in circles like they should. Until tonight. The booze is helping, I think. I have decided to imagine that I have an itch deep in my bum, and I have to scratch it without using my hands, or rubbing against anything.”

In some of Wainaina’s writings, the author ate kabisa the places he visited. He swallowed whole places by describing smell, taste, and feeling, such that his own body often became a map of the place itself. He ate his way through Nigeria. His stylistic sensibility was dictated by such things as smell, sweat, touch, flavor, and color. Arguably, the central concern of much of his writing was the struggle to put words to a place. How to actually describe a place. One Day I Will Write About This Place. His exercise was mimetic, but not in a Platonian sense. He wrote with concrete images, and sharp dialogue meant to speak directly and unambiguously to the reader: “I order a Tusker. Cold.” Style for him was never ekphrastic in the metaphysical sense; but rather linked to consumption, and devouring. His style was profane. Rather than deify, it devoured.

A prominent Ugandan poet once relayed to me that when Wainaina was enthusiastic about a poem, he shouted epithets of profanity. His profanity reveals his interests in the many radical styles of Nairobi. While he declaimed the Afropolitanism of the mid 2000s, he exploded expectations about literature, by consuming. He consumed “digital literature.” He consumed Sheng. He collapsed the conservative and pragmatic, instead advocating urbanism, music, poetry, digital culture, and the internet as a space for connections. Few authors besides Wainaina, such as Yvonne Adhiambo Owuor, could actually borrow the feeling of Tshala Muana’s or MBilia Bel’s music and hold it within a page of prose. 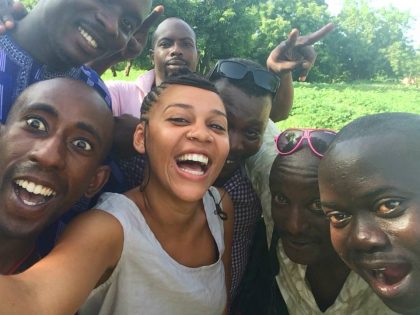 There are no bees in Dakar

Dedicated to the memory of the writer’s friend: the rebel and genius, Binyavanga Wainaina.