There is a scene in A Stranger’s Pose, Emmanuel Iduma’s new nonfiction book, when he wanders the Moroccan city, Rabat, with a companion who offers to, “show you how Nigerians live here.” Iduma finds himself in a crowded house, where people, drinks and drugs are for sale. “I was trying to make it to Europe,” says Iduma’s host later as they walk home. “But then I came to Rabat.”

From the time he was 22 to 26, Iduma traveled to 20 African cities, the majority in West Africa. Some of Iduma’s trips occurred during the years he participated in Invisible Borders, a project that funded African artists to travel across the continent and document their experience. Others Iduma took on his own.

As we follow Iduma through his travels, we are briefly transported to new communities. Letters, stories, poems and images surface within the broader text, often making connections between previous eras and people. There are images by African photographers, from Burkina Faso’s Siaka S. Traoré to Ethiopia’s Michael Tsegaye, including portraits in which Iduma shyly poses.

Iduma sometimes omits certain details—names, locations and mode of transport. The result is, at times, intentionally disorienting. But Iduma’s lyrical prose and curiosity allow for delicious submersion. The result is a journey through emotion, thought and place that is not restricted to specific countries. It is also a personal meditation on transience and grief; the ways in which movement can and cannot heal.

I met Iduma on a crisp October afternoon at an empty coffee shop in Sunset Park, Brooklyn, right before the US launch of his book. We talked about his lifelong fascination with photography, the politics of travel and why home remains an elusive concept.

Today across Africa, borders are becoming more, not less, militarized. In the name of stopping migration and counter-terrorism, European countries are funding biometric technology, border guards and training police. Few African governments have resisted. In the book, Iduma meets people on the move to Europe and understands that already he is traversing through a different reality: he will never know what it is like to undertake those crossings. “The ocean is the world, without partition or division, only depth and expanse,” writes Iduma. “The opacity of the sea is therefore its rich, dangerous promise. Some will drown, and some will reach harbour.”

Yet A Stranger’s Pose remains a powerful testament to the possibilities that result from human movement.

(The following has been condensed and edited for clarity).

This book can be read as a process of becoming; as an artist, a writer and a person. How did your travels shape you?

I came to the end of the book feeling that I had articulated something for myself as a human being, which was the notion of what it means to be a stranger. I felt that I had material for a book that is not just about travel but is more about the process of discovery.

Throughout the book, you detail several brief relationships, but not lasting connections. In which way do you feel travel brings you closer to people, but also farther away?

It became clear to me from the start that I couldn’t form lasting relationships [while traveling] and that wasn’t the point. And this is what informed the entire preoccupation of the book—the notion of estrangement.

But how do you stay within that moment of being a stranger and still feel some kind of genuine interaction? Maybe that’s exactly why it’s a travel book because that’s what the genre requires or expects from the writer—to write about experiences or encounters that are always going to be brief and, in that sense, complete.

Do you think that’s always the nature of being a traveler, or is that also a choice? At what point would it be possible to cross this threshold from the stranger passing through to being part of a place or community?

I think it’s at that moment that one defines home. For me that’s still something I’m trying to figure out, because I live in this country [the US] and it’s just a mess and I’m constantly asking myself, how much longer will I be here? What does it mean to keep being away from Nigeria, away from my family?

I would say no and that’s being really brutally honest. Especially because I’m not American, I always recognize that anything can happen—your visa could be rejected—you might never get permanent residency or become a citizen. So in that very bureaucratic sense, just the knowledge that my status is “provincial” is enough to make me not feel settled. [When I came], I only knew I wanted to do my MFA, and everything was finding my way in the dark and trying to insist that a writing life was possible; I’m sure you know that struggle.

It’s very lonely—you’re creating something that does not exist and no one’s really there to guide you or to tell you it’s going to be okay.

Or tell you, this is how you do it. I trained as a lawyer. I’ve done some curatorial work. I feel it’s difficult for people to place me. It’s either that you’re talked about as an academic, or as a scholar, and that’s very far from my interest.

I didn’t think I was writing a travel book until I was almost done. I was just recounting experience. But what is a travel narrative?

Unlike other travel narratives, you don’t often give names or places.

Well that was important to me, that anonymity was a device for storytelling.

I was also thinking a lot about Yvonne Owuor’s essay in the Pilgrimages project that Chimurenga did in 2010 when they sent a number of writers to different parts of Africa during the World Cup to write short pieces. It was very much conceived of as a travel writing project. Yvonne’s essay was important to me because I could see that she immediately went to the lyrical—she basically went in search of music and in search of silence.

In the book your travels seem almost borderless, but then you juxtapose that with the stories of someone who went to Libya, or to Europe—how did you reconcile your freedom of movement with those who have none?

Around the time I was traveling, migration became a central question. Because I tend to shy away from the obvious, I wanted to find a way to write about migration and the perils of crossing to Europe without making the book about that. How do you make this part of a larger question? The question of itinerancy; the question of the freedom to move or the constraints; or the very important distinction between living in a tent and living in a house made of walls?

I have some limitation attached to my movement because I have a Nigerian passport, but not to the same degree of severity as someone who doesn’t have a passport at all. I had traveled as an artist—and there’s no greater privilege than that. Even though we had a lot of challenges on the way, we had passports and funding; we were invited to places. Even if you don’t know people in a place, you have equipment that immediately identifies you as someone with access.

It was important to admit that right away, and also important to explain or convey how my experience paled in comparison to those I had met on the road.

There was this guy I met who said, “the sea is the only way.” And I thought, that’s the only thing I should write.

I think of it as worlds within worlds.

I think so, and I think it’s important that the project finds a way to allude to that—it’s always an allusion, in place of the main thing—the shadow not the substance. And I’m fine with that, with describing the in between.

In other travel writing, there is this attempt to say, because I spent time there and did research and work, I can say something that is whole. But I [felt] I could only write about these [places] in fragments.

Why the enduring fascination and admiration of photography?

I think its memory. The fact that photographs are indexical—they refer in a very clear sense to what has been. A good photograph is difficult to forget. There’s a good quote from Audre Lorde:

However the image enters
its force remains within
my eyes.

You don’t reveal a lot about yourself in the book. Why not?

But not very often. We get observations of yourself—or of your emotional state—but only in a particular moment.

I believe that my life is only interesting if it connects to the lives of others. So my sense is how can I use the logic of the I, but also propose something a little bit—I don’t want to say universal—but larger.

When did you know that you wanted to be a writer?

You wrote once in an essay that desire is sanctioned by loss. What did you mean?

I’m becoming more aware about how all of my writing is in some way an attempt to understand loss, so my thinking then was how can I connect the desire for people you love, or are in love with, to the knowledge that you will lose them one way or another.

And I wanted to find a way to say that it is loss that makes it possible for desire to exist. If I didn’t lose people, I wouldn’t know what it means to desire them.

How do you feel about the book coming out? 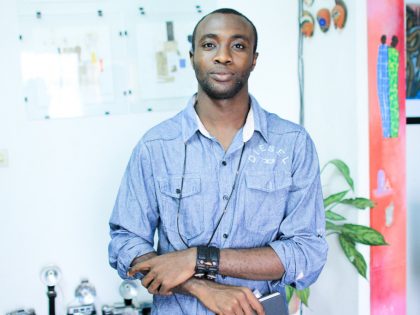 The new, African magazine — for us, by us