With more than 220 million Youtube views  in three weeks Childish Gambino’s “This Is America” video has been claimed as a “woke” response to Donald Trump’s America First policy and has provoked numerous interpretations. “This Is America” plays like an update to West Side Story’s “Life is all right in America, if you’re all white in America” and shocks with its dance of death. The rapper appears moving like a hip-hop version of the dwarf in the TV series Twin Peaks and navigates the fantasy. He begins by shooting a guitarist dead and is followed through scenes of mayhem by joyous dancers dressed as 1960’s school-kids who perform African dances including South Africa’s Gwara Gwara. The video has the structure of a daydream that ends when the artist lights a marijuana joint and we see the guitarist alive again. The ambiguities on show enthrall many viewers who continue searching for cryptic truths at play. But what does it all mean?

The video’s potency lies in the contrast between the lyrics and the visuals. The lyrics affirm the standard slogans of hip-hop (this is America: I’m streetwise, I’m all about the money) while the visuals depict a nightmare vision. It’s this dissonance between the song and what we see that ignites the video. This explains the flatness of the song’s live performance on TV (Saturday Night Live) which resorted to a spectacular light show instead. The references to specific violence and social unrest exist only on the screen, not in the song. Following this, one can easily imagine a video remix of “This Is America,” with exactly the same song accompanied by news footage of US foreign policy aggressions from Hiroshima, through Vietnam to Iraq, Obama’s drone strikes and Trump’s Syrian bombings (with perhaps a loop of Ivanka Trump opening the US embassy door in Jerusalem) Is this America?

Many have cited Childish Gambino’s shooting of the church choir in the video as referencing the racist motivated 2015 Charleston church killings. But the trouble with many of these comparisons,  is that the surreal element of the video blurs a literal translation. For example, the shootings of both the choir and the acoustic guitarist can just as easily be read as depicting acts of nihilism, as hipster youth destroying the older generations values, similar to Sid Vicious singing his version of Frank Sinatra’s “My Way,” then shooting the applauding wealthy audience in the 1978 Sex Pistol’s film The Great Rock ’N’ Roll Swindle.

In the video the color red signals danger. So the penultimate image of Childish Gambino high on weed, obliviously dancing on top of a wrecked red car with hazard lights blinking is his depiction of the American condition. Black entertainment is the bread and circuses of our time. But the deeper truth of “This Is America” can be found outside the frame of it’s cynical world view. Gambino’s lyrics boast that he wears Gucci, has cash, contraband and connections in Mexico who can find you and kill you on his word. Meanwhile the video tells us he’s one step removed from these lyrics, warning us that his own blasé, violent attitude, defines America. That this is America. We should meet this schizophrenic take with an equally cynical reply: “tell us something we don’t know!” Following what Slavoj Zizek calls ironic distance, its not the jaded, cynical world outlook that’s the truth, it’s that people adopt a cynical outlook to cope with life in the system, while still remaining compliant that more accurately represents reality. And this pragmatic “get your money” attitude only works to keep the system in place.

In the song’s outro, the artist lastly speaks openly to the theme. We see Gambino running wide-eyed from a mob unable to escape the building. This to the words of “You’re just a black man in this world, you’re just a barcode” (with a Paul Simon/South African melodic lilt) and lyrics about life as a kenneled big dog. This trapped, “no way out” vision depicts the underlying conflict the musician has with his success as a commercialized black entertainer; that his image as a commodity plays a role in perpetuating the very same (racist, exploitative) system he’s opposed to. And that you can run all you like from this dilemma, there’s no way out of it. There may be a solution to this paradox though, if Childish Gambino turns around and runs back in the other direction, to the part of the building where the crowd were engaged in running battles with the police. It’s not clear what the crowd’s program is, but if we’re all trapped in this exploitative building with no escape, then surely our only hope is to try and liberate the place together?

There is an interesting music video reply to “This Is America” called “This Is Nigeria,” speedily produced by the artist Falz within only three weeks of Childish Gambino’s release. Falz’s song takes a different approach to the original in that “This Is Nigeria” openly catalogues problems of corruption in Nigeria, while in Gambino’s song, the message (until the outro) is in the subtext. Though didactic, “This Is Nigeria” keeps its violence offscreen, while “This Is America” exploits it. Many moments parody “This Is America,” such as a Nigerian flag-green color key and dressing the dancers in hijabs like the Chibok girls kidnapped by Boko Haram, though Falz doesn’t extend the parody and reverse the decontextualized Nigerian Shaku Shaku dance in “This Is America” by having his dancers appropriate American dance moves. But the openly instructive and humorous lyrics of “This Is Nigeria” ultimately reach the same conclusion as “This Is America” depicting the no way out limits of the system in such lines as the opening “We operate a predatory, neocolonial capitalist system, which is founded on fraud and exploitation and therefore you are bound to have corruption.” As with “This Is America,” maybe its a limitation to simply symbolize, as important as it is, the entrapment of the situation without proposing a way out of the prison. After all it was Karl Marx who established a revolutionary theory based on his dictum that “The philosophers have only interpreted the world, in various ways. The point, however, is to change it.”

Perhaps there will be more versions of “This Is America” from artists in other countries, directing their own local anger at the system. If there are enough “This Is…” tracks to compile an album it will make an interesting musical critique of global capitalism and its accompanying manias. They would do well to use this line from Falz song to name the compilation, however: “This Is Democracy, Political Hysteria.” 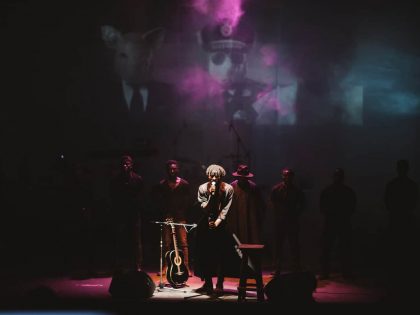 Return to the Motherland

From the late 1950s, emigration to independent Africa became a feasible option for African Americans tired of U.S. racial segregation. After Apartheid, South Africa became too.