Nadine Hammam is an Egyptian artist making work around the embattled domain of the female body. We speak as she works on a series that will go to Art Dubai at the end of March. This, she tells me, addresses “political issues and gender issues, using the female nude”. Gender is one of the Egypt revolution’s most complex domains. Sophia Azeb has engaged with it in these pages. Sarah Topol has recently blogged in the International Herald Tribune about the sexual harassment Egyptian women have faced since the revolution. Hammam’s work maps out the social and psychological position of the female body through the dialectic of the naked and the nude. A recent series, ‘Heartless’, featured the silhouettes of women, adorned with splatters of what might be blood, stamped with slogans like “i need a revolver more than i need you.” I’m interested to know if her work consciously seeks out controversy, aiming to provoke political debate around gender.

She insists it doesn’t with a blankness that I believe: “I don’t really care about what’s acceptable and what’s not. I’ve had a lot of no’s in my career.”

This new work, she says, is an attempt to form “iconographies of what’s happening today.” The situation in Egypt today is something Hammam has only recently been able to work through. She was asked to make a piece for Art Dubai last year, but refused:

She realized this during a recent interview:

If the current situation in Egypt is an obstacle to the production of art, this is certainly a project which explores those difficulties:

If I could get funding to do it, I would do it … [but] when you get a lifesized tank, where do you put it? It would be a direct insult to the army.

Provoking the army is clearly not her priority. It’s probably too easy as a female Egyptian artist. Hammam, like many Egyptians, felt overjoyed when the army entered Tahrir Square on the 29th January:

I even got on the tanks as they rolled in from the Rameses Hilton. Saturday, I got on a tank happy. … Oh my god the army are here to save us … There was a sense … the army was going to do what’s right.

The last year has been a political maturity for generations of Egyptians, and the temptation to assume a position of cynicism must be tempting. The struggle continues, Hammam suggests, increasingly in the arena of media representation:

We are fighting a media war. What some of the television channels say … They say that in Tahrir there are only 2,000 people.

But, she suggests, art has a role beyond critique. The artist must not remain “reactive”, stuck attacking regimes of meaning and representation, but must become “proactive”:

It’s like a husband and wife … I can keep calling you a liar … but until she gets up and says ‘I’ve had enough, this is what I am going to about it’ … Until we become proactive. I can’t convince you that the army is a liar … until I show you a better way.

This impulse, to make romantic situations speak to political conflicts (and vice versa) is at the heart of Hammam’s work. As surely as politics intervenes at the most personal levels, the personal is the most accessible domain in which political decisions are made. And most intimately known. Hammam’s think about change, she says, applies in all areas of life:

The pressure on Egyptian artists, to protest, be exemplary, to make art that provides critique, and a vision for the future is significant. The piece Hammam is working on at the moment is, she says, “proactive”:

It’s telling the army. It’s direct – I don’t know whether it’s an attack or a commentary – without me saying anything. I’m using the icon of the tank. And the female figure. And I’m feminising the tank. I think it’s a piece that has a lot to do with gender in Egypt. If you look at statistics alone – if you look at the lower classes. Mainly the women are the main workforce. Men stay at home. If these [were to] women mobilise …

Still, I wonder if the work Hammam makes would be shocking to some Egyptian women:

The exposure of work remains something that she knows must be carefully controlled. Before the January protests, Hammam had posted some images of her work on Facebook. She soon took them off:

When you’re in Tahrir you’re judged because of what you wear and you’re not veiled … I thought I can have dialogues with these people … I can break this barrier. But if they were then to see all this nudity they would judge me … If I were to bring my nudes to Tahrir, that would change. I would probably be labelled … the majority would not understand it … it would probably create a backlash, like Alia [Elmahdy]. It’s not a productive.

I assume Hammam’s thinking about the politics of the female body must have made Elmahdy’s decision seem naïve, but she counters this:

I work with the nude. When I first heard someone had taken off their clothes. It sounded cool. When I first saw the photograph I was taken aback. It was a very stylised photo … the red ballerinas … the red clip in her hair … the position of her leg … slightly suggestive.

The decision to post the picture may have been naïve, but it was these stylistic decisions that made it such a problematic gesture.

I thought the picture was stunning, I loved the picture. I would have loved to see the picture in the setting of a gallery. [But] it did damage to the liberal cause.

And that is the difference between gestures like Elmahdy’s media intervention and Hammam’s work:

I’m not trying to shock people. What I make is really from my heart. The last series was a question: is it possible to love someone forever, with that same passion or desire … If yes, okay, I haven’t seen it. I lean towards the no …

But are there buyers for this work in Egypt? Yes, she says, but of “the collectors who do have female nudes, I can think of two who can put female nudes in their living room, not their bedroom. There is nudity in Egypt. It does exist. They do buy it. But they will put it in the bedroom.”

And has the revolution damaged this?

This situation, in which riot becomes contained in the schedule of the mundane, is something Hammam’s art militates against. The idea of democratic self-determination – which has recently authorized some notably undemocratic military interventions – must presume a definition of the self. This determining self, complete with a stable social identity and coherent desires, is one of democracy’s most important fictions. Art that knows the fluidities of the self, and confronts the attempt by an apparatus of power to coerce them into containment is especially important in this moment of national reformation. These nudes are the brutal and exterior selves formed by the shocks of political life. This exteriority is punctured by an intimate presence which is both a wound and a sign of life. Those who are fighting for political self-determination are no more than a mass of people each longing for love. This work recognizes an interiority that must survive at any cost.

A week after we speak, Nadine gets in touch to say the work won’t be going to Dubai. The gallery says the work is “too risky.” 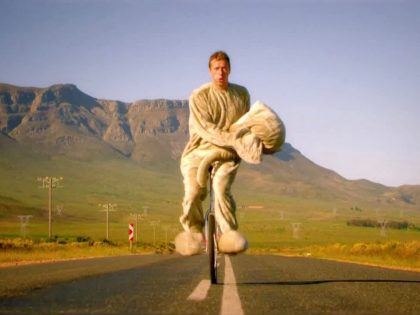 Coldplay’s “Paradise” music video is set in South Africa. The video is mostly is an antiquated perception of the country held by many in the West.