The history of South African music under apartheid can roughly be divided into two categories. The first, and arguably the best documented, is that associated with the exile Jazz diaspora—think Miriam Makeba at the UN and Hugh Masekela performing at London’s anti-apartheid rallies. The second is of those musicians who remained in the country and carved out musical spaces and subcultures in a context of police harassment, surveillance, and relative isolation.

A new documentary, This is National Wake, by Mirissa Neff sheds valuable light on this under-examined second category. Like many others, I first heard of National Wake through the 2011 film Punk in Africa. Live footage from that documentary is electrifying. Who knew that South Africa had a band that sounded like a mashup of The Clash, Stooges, and Gang of Four? Almost no one, which makes Neff’s documentary all the more valuable.

National Wake emerged from a student commune just north of downtown Johannesburg. In the late 1970s an increasing number of progressive white students from Wits University had moved to the neighborhoods of Parktown, Hillbrow, and Yeoville. With them came countercultural identities and spaces that provided opportunities for political organizing, multi-racial collaboration, and artistic exploration.

Anyone who has seen the documentary Searching for Sugarman (about the Mexican-American musician’s appeal among white South African army conscripts) will have some sense of the insularity of South African cultural life during this period. Apartheid delineated firm boundaries between ethno-racial groups. Afrikaans radio focused on European classical and folk music, while Radio Bantu focused on “traditional African music.” Those groups who had obvious cross-cultural references and combined musical stylings were heavily discouraged. Jazz, in particular, with its racial mixing and connections to African American culture, was seen as particularly threatening.

In this environment what National Wake did was radical. They played music as a racially integrated band, sang about state violence and political freedoms, and combined musical genres.

Their biggest hit, International News, evokes a murder scene, where a blanket draped over a body barely conceals the horror of apartheid violence below:

At the opening of the film, we hear Kadey reflect: “We were all cast in roles because of that oppressive system, but music is different. There’s an intimacy of something happening in the moment and then it’s gone.” It’s a powerful opening statement, and the rest of the film attempts to answer the question of whether music can help us transcend these socialized divisions.

The footage, however, is the real star. High energy gigs on Rocky Street in Yeoville, domestic workers in doeks (headwraps) dancing alongside hippies in the streets. Sweaty bodies dancing cheek by jowl in a Sharpeville club, the black township made famous two decades earlier by police violence against protesting black crowds. As Shibambo puts it, “When we were dancing, there was no apartheid.”

But of course, apartheid was there when they returned home, when they played to segregated audiences, and when people assumed Kadey was the leader of the band because he was white. These dynamics came to a head when, at the height of their success, they were invited to play the Chelsea Theater. They could perform as a multi-racial band, but to a whites-only audience.

It was all too much for Gary, he retreated to Soweto until Ivan went to make peace, but the writing was on the wall. It was unclear to Gary where the band would take him aside from the back of a police van with a cracked skull. The risks for him and his brother were far greater and the possibilities of success more limited. Gary eventually quit the band and left the country for England where, at least for a time, he became a part of the London jazz scene.

It’s here that the documentary takes a darker turn. We hear from Gary’s ex-wife, who tells of his mental breakdown during this period. She left with their child, and he returned to South Africa. In one of the more moving scenes, we see a mute Gary hunched over a piano, improvising a sprawling melodic piece, light and airy, at the end he simply looks up.

The band member’s trajectories after the breakup of National Wake provide a depressingly familiar South African story. Kadey falls back on his architectural training, leaving the country for a successful career in the US. The Khoza brothers meanwhile struggle to realize their musical aspirations at home and abroad. They didn’t have much to fall back on. We learn that Gary committed suicide and Punka died of AIDS.

Documentarians make editorial choices about the elements of the story to focus on and how much context is necessary. At just over one hour, though, it seems a missed opportunity to provide a more thorough exploration of this complex and overlooked period of South African music history.

National Wake emerged at a particular time and place. The film provides the usual historic markers: Sharpeville in 1960, Soweto in 1976, the 1985 state of emergency. These are no doubt important, but what of the killing of Steve Biko in 1977, the assassination of Rick Turner in 1978, conscription and the war in Angola?

Because National Wake emerged from the radical student milieu of the late 1970s, this context is critical and could provide an opportunity to better understand the political events that defined the counterculture movements of this period.

Then there’s the space of Johannesburg itself. Kadey has described Parktown and Yeoville as critical to the emergence of the band because they were, at least for part of the day, somewhat integrated. Residents of these neighborhoods recalled them as spaces where apartheid rules were often overlooked and racial mixing occurred at a range of venues. It is unfortunate that the documentary does not dig a bit deeper into how these urban dynamics made this music possible.

While National Wake were the only multi-racial punk band of this period, they were hardly the only band making angry, subversive music. In 1983, Kadey co-founded the Shifty Label, which would release multiple anti-apartheid albums and become associated with the alternative Afrikaner Voëlvry movement. We don’t get a sense of these musical connections or the broader punk scene that formed around this label in the early 1980s. There is significant opportunity for filmmakers to document bands like The Genuines, a goema-punk group from Athlone, a coloured township in Cape Town, or the Kalahari Surfers, Warrick Sony’s experimental sound art group featuring the poet Lesego Rampolokeng from Soweto.

For those of us who knew nothing of this history and suffered through the Mango Groove years of the mid-1990s, this film is a powerful excavation of South Africa’s rich musical past. It demonstrates the power of punk to challenge established orders and build more equitable ways of being together. 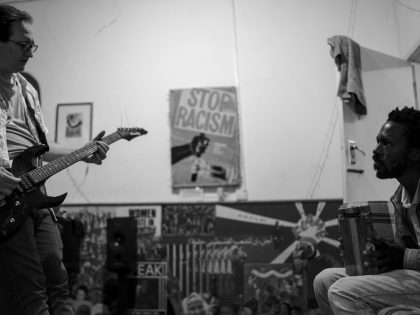 A people’s history of Zimbabwe’s first mbira punk band, Chikwata 263, who wanted a soundtrack for the country’s post-post colonial blues. 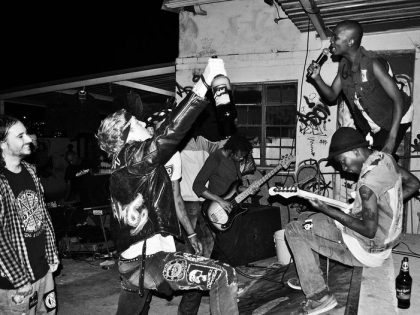 A punk festival comes close to what one would imagine the DIY-embracing, eccentricity-accepting and obedience-ignoring CBGB’s of the ‘70s to have been like.