The documentary film El Maestro Laba Sosseh (2021), directed by Maky Madiba Sylla and Lionel Bourqui, is full of pathos, guilt, regret, and nostalgia for times long gone. It is also a party—an overdue celebration of the life and legacy of the first Senegalese musician to receive a gold record.

It all started with an interview published in the Senegalese newspaper L’Observateur on June 13th, 2007. The first line: “Admitted to the infectious diseases section of Fann Hospital, Laba Sosseh, the first African to receive a gold record, sends a cry for help.” The article was accompanied by a disturbing picture of the man once nicknamed “El Maestro” for having shaped the heydays of Afro-Cuban music in Africa, particularly in Gambia, Senegal, and Ivory Coast. Sosseh, at the time 64, looked much older. As if afflicted with kwashiorkor, El Maestro was bony, his eyes were bulging, and his skin was gray. He looked nothing like the handsome international superstar he once was. “I feel too lonely,” he told journalist Mame Sira Konaté, whom he had summoned in order to “unburden himself.”

Many decried this undignified picture of El Maestro. How could this happen to a man who was once so famous? His musician friends rallied to organize a telethon to help him with medical bills, but it was a little too late. Sosseh passed away on September 20th, 2007. Nothing significant was done by Senegalese state authorities to pay homage to this musical icon, who was among the first to carry the country’s name to an international stage.

Born in Bathurst—the former name of Banjul, the capital of Gambia—in 1941, Sosseh moved to Senegal in the early 1960s to join Ibra Kassé’s Star Band, one of the first orchestras in Dakar and the launchpad for stars like Youssou Ndour. Sasse and the inimitable Nigerian saxophonist Dexter Johnson formed a powerhouse duo and crystallized Afro-Cuban music in West Africa. Sasse reinterpreted Cuban classics like Guantanamera and El Manisero and had duos with Cuban stars such as Monguito, Roberto Torres, and Orchestra Aragon. But his greatest accomplishment was his ability to infuse the polyrhythmic Cuban sounds with West African colors, singing in Wolof, Lingala, and Guéré—because for him, Cuban music is quintessentially African. When his relationship with Johnson soured in 1968, Laba Sosseh left for Ivory Coast, where he enjoyed huge success under the patronage of then-President Houphouet Boigny. But when he returned to Senegal nine years later, mbalax (Senegalese pop music) had taken over and Afro-Cuban music had been buried in the memories of people from his generation. Even though El Maestro tried to resuscitate it, he too soon faded into the musical archives.

Maky Madiba Sylla is one of those who believes that Laba Sosseh deserved to be celebrated. So that’s what he does.

Sylla’s film is a melodic ode to Laba that, at times, makes you want to get up and dance; at others, it makes you wonder why, despite his huge success, Sosseh ended up dying penniless and alone. It is this lingering question that Sylla asks throughout the film. As a reggae musician who performs as Daddy Maky and who has collaborated with giants like South African Lucky Dube and Tiken Jah Fakoly from Ivory Coast, Sylla knows all too well the adage, “Art does not feed its maker.” He is also passionate about cinema and studied at the Birmingham Film Institute. In this debut film, he combines his two loves—music and cinema—and gives us a clip-like film that succinctly mixes images and sounds, proving the continuity between the two art forms.

The film manages to challenge the final picture that the world saw of El Maestro by highlighting the glory of his days as a pioneer of Afro-Cuban music in West Africa. It retraces Sosseh’s footprints across three continents, evoking pathos and celebration, mirroring the restless yet full life that El Maestro lived. The succession of affecting testimonies from those who knew and worked with El Maestro are the highlights: they provide unscripted emotions and allow the viewer to see El Maestro from different perspectives, revealing a diva-like yet compassionate character.

The film is also a genealogy of Afro-Cuban music in West Africa. It nostalgically samples the musical and sartorial aesthetics of Dakar in the 1960s and 1970s, when Ibra Kassé’s Star Band and Dexter Johnson’s Super Star Band were in a ferocious rivalry, vying for the attention of Afro-Cuban musical fans.

The cinematographic movements are languorous and sometimes fast. Laba’s amazing voice provides the soundtrack for the film—as if El Maestro is at his own postmortem party. Still, there is some vulnerability. El Maestro’s relationship to women and alcohol is given space. His eponymous song Seyni, a declaration of love for Seyni, the young woman with whom he fell in love at first sight, is the precursor to intense pathos. Their forbidden love hints at El Maestro’s restless and complicated relationship with women, who are misogynistically faulted by some of the interviewees for the Maestro’s unfortunate demise. The feminist in me frowned at these accusations.

The archival work is robust, and it would be unfair to fault the filmmakers for missing the audiovisual records of Laba and other Senegalese Afro-Cuban musicians’ pilgrimage to Cuba in the early 2000s. In the general practice of testimony after someone’s death (seede bu rafet in Wolof, Senegal’s lingua franca), the film glosses over El Maestro’s relationship with the many children he fathered around the world. Of his twenty-seven known children, only one—Denzy, a musician—appears in the film.

There were some meta moments for me. I was reminded of the Afro-Cuban dance lessons my mother—a contemporary of Laba Sosseh—and her sisters gave us as they chaperoned our neighborhood and family parties. Our bodies and hair, drenched in shea butter, would shine under the lone light bulb hung in the middle of a sandy yard, where a tarp was laid to serve as a dance floor. Watching the film, I was nostalgic. As veteran DJ Djibril Gaby Gaye says in the film, “There is an explicable nostalgia in Laba’s voice.” Toward the end of the film, I imagined myself in a white suit, a black felt over my head, a walking cane in my hand, sashaying at the back of the second line at the funeral of El Maestro. Only this time, we were in the streets of Havana, where huge crowds of fans waved goodbye. The high pitch of Denzy’s rap over Laba’s voice brought me back to reality. I felt comforted by this palimpsestic arrangement that gives hope that Laba Sosseh lives on, at the very least in his son’s music. Adios El Maestro Siempre.

Sylla, who has chosen Nelson Mandela’s nickname, “Madiba,” as his middle name, is a militant filmmaker who is on a mission to bridge the gaps between old and new generations by excavating iconic Africans whose legacies he believes need to be known. He wants to engage in a culture of memory building and recording for posterity. He is on the right track with this debut. 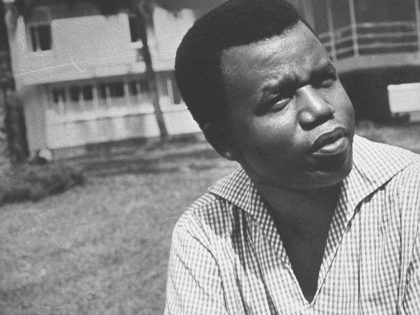 This month on Africa Is a Country Radio, taking inspiration from the work of Chinua Achebe, we take a listen to the music of the post-independence era on the African continent. 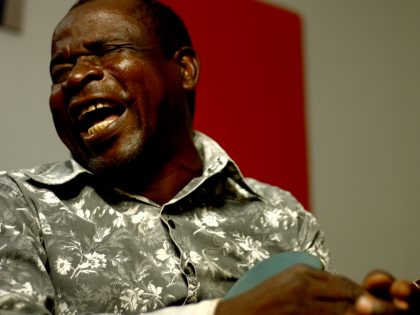 Gonora Sounds’ music gets at what it means to be a Zimbabwean: We might be crying, but we are also dancing. 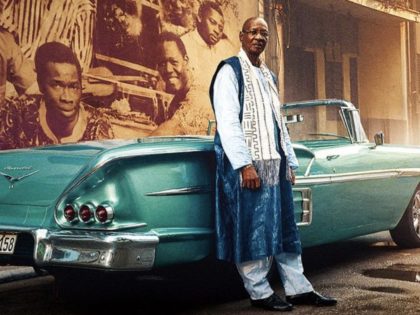 The film “Africa Mia” (2019), directed by Richard Minier and Edouard Salier, explores the musical connections between Cuba and Mali.