I was beaten by Omar al-Bashir’s regime. I was subjected to repression and abuse by his security services. They threatened me and imprisoned me several times. The persecution led me to migrate to Egypt, where I practiced my music freely in Egyptian cultural centers and collaborated with Egyptian artists. After eight years, I returned to Sudan and found that the situation was even worse than before—and that we, the Beja people, are still suffering as an artistic community.

During Al-Bashir’s reign, art was directed according to the regime’s agenda. They fought artists who did not align with or belong to the regime—Beja artists who sang for their own heritage, singing in the language of their community. These artists were never represented on radio or TV or presented publicly in approved festivals inside and outside Sudan.

The Beja people are considered one of the tribes that live a harsh life because of our mountainous desert region on the east coast of Sudan by the Red Sea. Although our region is rich in precious metals such as gold, uranium, silicon, and mica—used in a variety of electronic equipment worldwide—we still suffer to this day because of our marginalization and neglect by successive governments in Sudan, especially during the past thirty years.

Al-Bashir used to look at us with nothing but racism and describe us as ignorant and illiterate. He would say we offered no benefit to the state. He and others would describe us as people with an unpleasant smell, and because Beja people are known for their unique hairstyles, they would call us carriers of lice. They say we are a backward and lazy people.

Bashir recruited men of the richer, more influential classes among the Beja in order to implement the agenda of the ruling National Congress Party. Their goal was to obliterate and replace the identity of the Beja. Bashir’s regime did not take even a single measure in favor of the Beja people; our treatment was entirely violent.

The Beja people have held a number of peaceful demonstrations over many years to express our grievances. We have closed and barricaded the national road linking Port Sudan, the country’s largest port, to all other cities of Sudan more than once. The world knows what Bashir did in Darfur, what he did in South Sudan, but they don’t know what has happened in east Sudan to the Beja. If the Beja people are treated better, this will help solve many problems across Sudan. This is why the world must pay attention to the Beja struggle. We have been at the forefront of Sudan’s revolution, demanding political and economic reform since before 2019.

We are distinguished by our great height and skin color, some brown, some wheatish in color. Some of us grow the hair on our head until it becomes thick, and use a special comb made of wood which we call “dhal” in our local dialect. During their occupation of Sudan, the British called the Beja people “Al-Fazi Wazi”—or “Fuzzy Wuzzy,” a slur coined by Rudyard Kipling.

We are adept in the craft of hunting. We also have special rituals in the way of roasting, grinding, preparing, and drinking jabana (coffee), one of our most important drinks.

The Beja are also distinguished by the manufacture of weapons, including special knives and swords and a weapon made of wood called the “safrouk.” You can not find a Beja person who does not carry a knife on his shoulder or a sword, one of our customs and traditions. They are considered symbols of strength and protection of our own. The Beja people formed a class of archers in ancient Egypt. We are fighters.

I have my own weapon: a tambo-guitar, a special instrument I made many years ago. It combines an electric guitar I found in the scrap heaps of Port Sudan with a five-string tambour my father gifted me.

When I was ten years old, I used to rehearse on a traditional tambour that my father had. I used to go to the coast of the sea and sit and practice Beja music in its rawest form. Today, I compose my own music with Beja melodies. When I came up with the idea of ​​making the tambo-guitar—and, thank God, I succeeded—I was able to use it to preserve Beja culture while also adding a modern touch to the music so it can be appreciated today.

Despite the marginalization of the Beja, our culture has not been killed. We remain committed to our heritage and spend our time playing traditional percussion instruments and the tambour and singing our traditional songs to keep them alive.

Music exists deeply within the conscience of the Beja people and has a great influence on them. We believe in our culture and translate it into music, even to the point of frenzy. I believe that music has a great role in our unity and struggle. It is an enduring mark of our survival, our resistance.

We have a distinctive art and our own tunes that are very different from anywhere else in Sudan or the Red Sea. Our melodies are characterized by the depth and power of their sound, which comes from hearing our music echo along the mountains of our area. Our music is sweet, nostalgic, ambiguous, and honest. It is also very old—ancient. The Beja people are ancient, with pharaonic origins. Our melodies are equally as old, tracing back to pharaonic times. Beja music thus forms an unbroken chain of melodies that have been passed down many generations.

Beja music cannot be beaten by any regime. 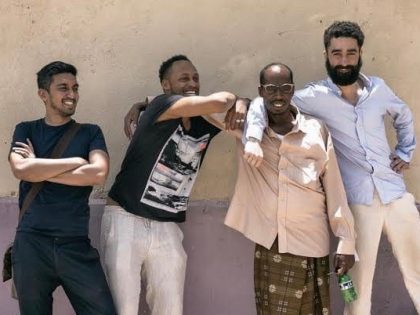 Little attention is given to how Indians are viewed and treated not only on the African continent, but by peoples of African descent across the world.