Nearly every day when I arrive for work at the New Cairo campus of the American University in Cairo, I walk through the Omar Mohsen Gate. This pedestrian security gate was named after an undergraduate economics major who died violently at a 2012 soccer match in Port Said between Egyptian Premier League teams Al Ahly and Al Masry. The tenth anniversary of that match passed earlier this month on February 1st. Egyptians appeared to have hardly noted it. If they did, they did not say or write much about it, and with good reason: four days later, their Pharaohs of Egypt would play against the Téranga Lions of Senegal in the marquee final match of the 2021 Africa Cup of Nations in Cameroon. The tension and drama of the final did not disappoint, though the outcome left many Egyptians disappointed as much as it left many Senegalese—whose team had never won the AFCON title—elated.

Including Omar Mohsen, seventy-four people died, and 900 were injured on that February 2012 day in Port Said. In an unlikely upset, Al Masry defeated Al Ahly, the winningest team in Egyptian football history, 3-1. But as the final seconds of the match wound down, Al Masry fans invaded the pitch and began assaulting Al Ahly players with knives, clubs, and flares, chasing the players into their dressing room. They also attacked Al Ahly supporters in the stands. (These fanatical football supporters were known in Egypt as “Ultras.”) The violence produced a mad rush to exit the stadium, but one of the gates near the Al Ahly section of the stadium was locked. People screamed from the pressure of the crowd, suffocating or getting crushed to death. One young man approached the gate from outside the stadium to help the besieged crowd. When he succeeded in breaking the lock from the outside, the crowd inside the stadium slammed open the heavy metal gate with such force that it fell on the young man and smashed him to death. Other Al Ahly fans were thrown to their deaths from the top of the stadium.

As the violence escalated, Egyptian security forces at the game stood by and smiled, apparently enjoying the spectacle. They did next to nothing to intervene. This, combined with the fact that so many fans were allowed to pass through stadium security screening with knives and clubs, quickly produced accusations that the Egyptian government was in on the plan to attack Al Ahly players and supporters. The largest finger pointed at the “old regime” of deposed President Hosni Mubarak. Perhaps an easy target by this point, a little over a year after the start of the 2011 Egyptian Revolution, which saw Mubarak removed from power, many observers suspected the old regime of a last counter-revolutionary gasp by sowing disorder among people hungry for the return of order and stability. In the ensuing legal process, seventy-three people were arrested, and eleven of them were condemned to death. Another soccer match between Al Ahly’s Cairo rival, Zamalek, and Ismaily was canceled later that night after news of the deaths in Port Said reached Cairo. In the wake of this disaster, the Egyptian Football Association suspended play for the next two years.

This suspension was thought to have retarded the progress of a generation of Egyptian footballers. After another Egyptian revolution in 2013 and the subsequent violent persecution of the Muslim Brotherhood and other supporters of democratically-elected President Mohamed Morsi, League play returned—but only behind closed doors. In 2017, Egyptian fans were allowed to slowly return to Premier League soccer matches. By 2019, Egypt was ready to host the Africa Cup of Nations under extremely tight security. In spite of the suspension, it did not take long for the Egyptian stars to return to international football, especially in the English Premier League. Mohamed Salah found his way to Chelsea in 2014 and then to Liverpool in 2017. Mohamed Elneny transferred to Arsenal in 2016. Both players began their careers with Egyptian club Al Mokawloon.

Before the 2021 AFCON final, many Egyptian fans had high hopes that another African Cup victory (Egypt has won it seven times), with superstar Salah leading the charge, would erase some of the pain and disappointment of the last turbulent decade—of which the 2012 Port Said violence appeared quite symbolic. One AUC colleague told me that she was anticipating that after surviving COVID-19 and seeing some degree of political stability and economic prosperity return to Egypt, life would continue to improve with another Egyptian victory in the African Cup. Perhaps this sense of optimism is why Egyptians seemed to take little note of the tenth anniversary of the Port Said disaster. According to my colleague, it is not that Egyptians are trying to silence the past as much as move on. For her, and many others, the Port Said disaster was just one chapter in a larger narrative of “the 2011 revolution.” One imagines, however, that in 2023, there will be some kind of remembrance of the tenth anniversary of President Sisi’s assumption of power (at the time, as General Sisi) in the wake of the 2013 revolution.

One of the few exceptions in noting the Port Said anniversary came from another AUC colleague, Ronnie Close, the author of Cairo’s Ultras: Resistance and Revolution in Egypt’s Football Culture. Close asserts that “the dramatic murders in Port Said, broadcast live on TV networks, can be seen as an extreme manifestation of police power, a traumatic spectacle played out in the media, designed to prevent the Ultras and other radical actors from assuming public roles or political agency.” There is no doubt that even beyond the stadium, the Ultras played an important role in the Egyptian street politics of the 2011 revolution and the instability that followed. By the time of a similarly violent confrontation between soccer fans and police at a 2015 match between Zamalek and ENPPI SC (Engineering for the Petroleum and Processes Industry), held at Air Defense Stadium on the outskirts of Cairo, the Egyptian government was ready to classify the Ultras as a terrorist organization. In 2016, when President Sisi appeared to extend an olive branch to the Ultras on the fourth anniversary of the Port Said massacre by inviting some of Al Ahly’s Ultras to join a government commission investigating the incident, the Ultras rejected his offer, claiming that the commission could not possibly be independent and granted real investigative power by the state. This impasse has led to a feeling of ambivalence, in stark contrast with the nervous, excited, expectant “football hype” of the decade leading up to the 2011 revolution, as described by Carl Rommel, the author of Egypt’s Football Revolution: Emotion, Masculinity, and Uneasy Politics. Rommel claims that Cairo’s Ultras are no longer what they used to be: Al Ahly’s Ultras dissolved in 2018, and Zamalek’s remain relatively inactive. Hopes that what Sean Jacobs jokingly calls Egypt’s “authoritarian football” style could win another African championship were crushed on the pitch in Cameroon. Nevertheless, many Egyptian fans have begun to allow themselves some hope for the future of Egyptian football. While they “do not want to be fooled by this football hype” again, they continue to hope that another African championship could help them forget some of the nightmares of the past. 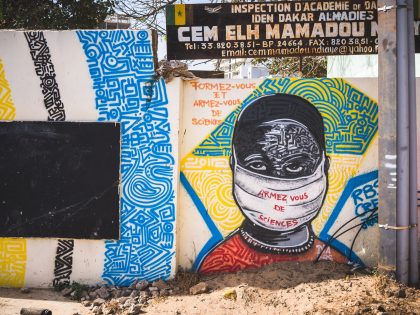 There’s a metaphor in there somewhere

Thoughts on the conclusion of the 2021 African Cup of Nations.

Egypt got knocked out in the Round of 16, but the hosts have been hamstrung by multiple events, including the military’s control.