In April 2018, Abiy Ahmed was sworn in as Prime Minister of Ethiopia, and in 2019 he won the Nobel Peace Prize for resolving the long-standing border conflict with neighboring Eritrea. However, since November 2020 when he ordered the military to violently quell an opposition movement in Tigray, a region along the northern border, his international standing and domestic popularity have significantly declined. Now, Ethiopia faces the prospect of splintering.

Prior to Abiy’s election, the government of Ethiopia had been dominated by the Tigray People’s Liberation Front (TPLF), which had effectively ruled the country since 1991 when they joined forces with other armed groups to overthrow the previous government. After Abiy came to power—he had organized the victorious Prosperity Party out of many ethnic-based parties to oust the Tigrayans—the TPLF quit the government and its leadership returned to Tigray where it focused on consolidating its authority in the region, and curtailing the influence of the Ethiopian government and military.

In August 2020, previously scheduled elections throughout Ethiopia were postponed ostensibly due to the COVID-19 pandemic, but the TPLF considered this a betrayal and held its own elections that the central government deemed illegitimate. This, coupled with the TPLF’s seizure of military bases in Tigray, pushed tensions between Abiy and the TPLF over the brink and shortly thereafter  Abiy sent the Ethiopian army to Tigray leading to a large-scale armed conflict.

The war has produced a mounting humanitarian crisis in Tigray, with aid workers struggling to bring in more assistance, especially food. The central government, however, has opposed this as it believes it sustains the TPLF. Since July, only 686 aid trucks in total have entered Tigray—far less than the 100 a day needed to avert famine—and none since October 18. Furthermore, there are few aid personnel on the ground to facilitate delivery and distribution. In August, Ethiopia halted operations by the Dutch branch of Medecins Sans Frontieres (MSF) and the Norwegian Refugee Council. The UN has also reduced its staff from 530 to around 220. On September 30, the Ethiopian government announced the expulsion of seven senior UN officials, including the country heads of UNICEF and the UN Office for the Coordination of Humanitarian Affairs. On November 9, 16 other UN personnel were detained by the government. Currently only about 1,200 humanitarian workers (including the UN) remain in Tigray. Moreover, violence against aid workers has also undermined relief efforts; 23 have been killed in Tigray so far. Currently, despite 5.2 million people in need (over 90% of the population in Tigray) and about 1.7 million displaced, only about 10% of the aid required has been delivered.

As worrisome as the situation in Tigray is, also of concern is that the war appears to be metastasizing—more armed actors are entering the conflict and the areas being fought over are expanding. Earlier this year, the government deployed militias from the Amhara region and allowed intervention from forces in neighboring Eritrea. But, the course of the conflict turned in late June 2021 when the TPLF dealt a severe blow to the central government by  retaking Mekelle, the capital of Tigray. Shortly thereafter, Abiy appeared to realize he had overreached in attacking Tigray and unilaterally declared a ceasefire. Yet, the TPLF has continued to fight, first pushing out Ethiopian forces from the remaining parts of Tigray, and then turning their attention southwards toward the central government.

Much like the 1991 campaign that toppled Mengistu Haile Mariam’s government, the TPLF has made alliances with other armed opposition groups, and last week a new group emerged, the United Front of Ethiopian Federalist and Confederalist Forces. In addition to Tigrayan forces, it also includes the Oromo Liberation Army, the Afar Revolutionary Democratic Unity Front, Agaw Democratic Movement, Benishagul People’s Liberation Movement, Gambella Peoples Liberation Army, Global Klimant People Right and Justice Movement/Kimant Democratic Party, Sidama National Liberation Front and Somali State Resistance. This coalition has indicated that its main aim is to preserve the 1995 constitution that ensures federalism and the right to self-determination.

On November 3, Tigrayan forces captured Dessie and Kombolcha (two towns on the road to Addis Ababa—only about 160 miles northeast of the city) and are now positioned to attack the capital. In response the Ethiopian government has declared a state of emergency and encouraged citizens to take up arms to defend the capital. Will backfire from Abiy’s failed political-military strategy blow up the status quo of single-state Ethiopia?

Aside from the urgent humanitarian conditions, lurking in the background is the issue of who is responsible. If Abiy is deposed and survives, there will surely be calls to put him on trial for war crimes. This demand will partly be for revenge, but also to obscure that atrocities have been committed by all parties in this conflict. According to a recently concluded joint investigation by the UN and the Ethiopian Human Rights Commission of conduct during the conflict in the period of November 2020 to June 2021, the government as well as forces from Tigray and Amhara have committed abuses, such as torture, rape, and civilian killings. Although reports like this are welcome, they overlook the impact of colonialism, its intentionally provocative and fraught political geographies, and the political cycles of its legacies. The constructions of many postcolonial states have been wedded at birth to difficult mixes of ethnic groups whose identities were purposefully politicized in a “divide-and-conquer” strategy, thereby creating weakness that allowed European domination.

Although ethnicity is not inherently destiny, these problematic dynamics are playing out once again in Ethiopia, a country with more than 80 different ethnic groups and a population of over 100 million. Since the formal dissolution of colonies, arms sales and proxies have been a staple of influence. Several countries have sold millions in arms to Ethiopia, which has contributed to the violence. In the past five years about $92 million worth of arms have come from Russia ($69 million), the US ($10 million), Israel ($4 million), China ($4 million), France ($2 million), and Germany ($2 million).

The digital frontier is another space for expressing influence and as disclosed in the recent Facebook Papers, the armed conflict in Ethiopia has likely been hastened by social media postings by various militia groups intent on inciting ethnic violence, though no action was taken by Facebook to stop this practice. Therefore, beyond Abiy’s gambit, this situation underscores that the colonial project has backfired and is blowing up Western notions of statebuilding. Abiy should be held to account for instigating this round of violence, and other armed actors should likewise be prosecuted for perpetrating atrocities. But regardless of these legal cases or who rules Ethiopia, will anyone be accountable for configuring these volatile circumstances?

What happened to Ethiopia?

The ongoing displacement and killings of minorities and the ongoing war in Tigray—labeled by the federal government as enforcing law and order—are disturbing. It can’t go on. 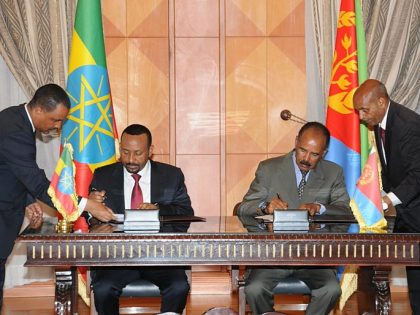