Our research has convinced us that policing is a task that goes beyond the police force and involves all citizens who say something when they see something going wrong. Community policing is an increasingly popular concept globally, while the war-like police force model is declining in popularity because of the propensity towards abusive use of force without guaranteeing public safety.

In Nigeria, the escalation of terrorist violence by Boko Haram and armed bandits especially in the northern parts of the country has resulted in a war of attrition that forced some local hunters to volunteer to assist the military in fighting terrorists. That is different from what we call community policing, because the war on terrorism has gone beyond the task of policing to denote a military mission or warfare. However, the spreading threat of farmer/herder conflicts over access to grazing land and watering areas, as well as the increased reports of rape, and kidnapping for ransom across the country have combined with police brutality to raise cries of the need for community policing in Nigeria.

The governors of the southeast region recently announced the formation of a militarized vigilante group named Ebube Agu (Awe of the Lion) to work with the police to tackle insecurity in the region. A similar formation, named Amotekun (Leopard), was announced by governors of the south western region. The northern region states rely on armed vigilantes to support the military in the war against Boko Haram but these groups could turn around to become political thugs, armed robbers and kidnappers if community policing is not put in place to move beyond conflict and warfare.

The Indigenous Peoples of Biafra (IPOB) launched their own Eastern Security Network after IPOB was proscribed as a terrorist organization for demanding a referendum on the independence of Biafra. But IPOB denied allegations that its members were attacking security officers and the governor of Imo State, Hope Uzodimma, confirmed that he had evidence that disgruntled politicians, not IPOB, were the ones sponsoring the violence. In the northern parts of the country, there are armed militant groups formed to prevent cattle rustling and deter kidnapping or massacres. In the Niger Delta region, militants are seeking more control over the resources.

Other countries on the continent provide valuable lessons around militarizing community responses. In the late 1980s and early 1990s in South Africa, the Inkatha Freedom Party (a Zulu nationalist group) clashed with African National Congress supporters in deadly violence orchestrated by the apartheid regime. We can also avoid the experiences of Sudan, where the Janjaweed militia terrorized the people and where the new republic of South Sudan soon descended into armed conflict between factions of the elites. Additionally, in Somalia and Mozambique, Al Shabab terrorists specialized in massacring Africans in a departure from efforts by communities to police themselves. Liberia went through a senseless civil war between armed thugs and the government costing many lives until the women came together to pray the devil back to hell in an approximation of community policing. The Democratic Republic of the Congo saw armed war-lords holding the people hostage over the control of the rare earth minerals that power the smart technologies of the world.

Not to be forgotten is the Central African Republic civil war between 2004 and 2007 caused by religious sectarianism. A peace agreement produced a lull in fighting, but the conflict resumed in 2012 and resulted in the dichotomization of the country between the two sectarian factions since 2014, with continuing mass sexual violence. Rwanda in 1994 witnessed hatred that was spread through the mass media, resulting in the killing of nearly one million Tutsi and many Hutus. During the Biafra War, the military government mobilized Nigerians against innocent citizens from the former eastern and midwestern regions, especially Igbo men, women and children, in a genocidal rage that killed an estimated 3.1 million people between 1967 and 1970 but without any suspects arrested by security forces.

All these prove that wherever people are armed as militias in response to heightened insecurity, mass violence can ensue. Turning African communities into armed vigilantes should be avoided, because this often leads to the perpetuation of violence against fellow Africans.

Instead we should move towards training communities in the use of digital technologies, such as how to use cellphone videos and cameras to record evidence of crimes, and how to set up community blog sites or electronics newspapers where tips on crime can be anonymously updated. Author and educator Assata Zerai has recommended that access to information technology and skills development for African women could help to improve people-oriented governance in Africa. Michael Kwet, a Fellow at Yale Law School’s Information Society Project, has called for “people’s technology” to be developed as an alternative to digital colonialism.

We recommend, in addition to improved social services, that houses and streets in communities be equipped with close circuit television cameras, powered by solar or by wind, when there is no electricity supply, as is regularly the case in Nigeria. Commercial establishments in the US and major streets in the UK already have CCTV cameras for surveillance despite privacy concerns by many. If communities control the surveillance cameras, the way private store owners do in the US, some of these privacy concerns might be abated.

Community watchfulness and surveillance should be controlled by the community instead of being used by the government to create a police state that spies on the people and erodes privacy and civil liberties. If a household sets up a camera to catch a babysitter abusing their child, or to catch the neighbors throwing trash over their fence, they may resolve the issue privately without involving the police.

Brian Jefferson insists that even though digital technologies are used in the US to control the people, with over 100 million names in crime databases, civil rights groups, and the Black Lives Matter Movement activists also rely partly on the same digital technologies to hold law enforcement officials accountable. Investigations should be handled by community committees with emphasis on peacemaking and healing. For instance, a widow could record the destruction of her farm and send the video to community organizations for mediation and possible reparations from the suspected offender without turning community policing into a means for more police control of communities, as Luis Gascón and Aaron Roussell warn.

Above all, we need to avoid the enthronement of toxic masculinity in African communities through the training and arming of vigilante young men. Rather, we should learn from our women who have a heroic tradition of resisting injustice non-violently. As Chinua Achebe suggested and Desmond Tutu and Mpho Tutu agreed, we need to promote our indigenous Africana philosophy of tolerance through Mbari or Ubuntu in recognition that we are brothers and sisters who inherited what Martin Luther King Jr called the World House, and that we should share in a beloved community rather than fight and burn it down with prejudice. 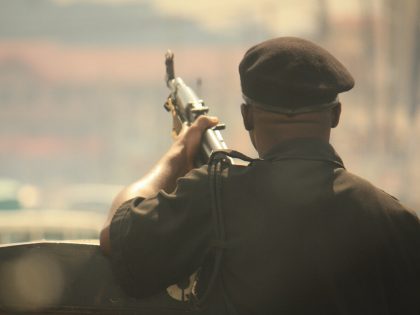 A History of Nigeria’s Police Service