Siphuxolo, a close friend of mine, was late, and I was a little bit annoyed with him. We are two different types of people. I am the anxious kind, so I prefer to be at an appointment twenty minutes early. Siphuxolo, on the other hand, relies on his dysfunctional intuition “to sense the time the bus will come.” We got to Cape Town’s bus terminal in the nick of time, paid, and sat across three seats, his bag between us. Conversations with Siphu are always political in nature, something we are both worried about. As a social experiment, we once talked about the weather, and believe me—we soon realized that the personal is political, and vice versa. I was raised coloured, he was black. I am gay, he is straight. I am queer, he is cis-het. Allegedly an unlikely pair in the rainbow nation of South Africa. Either way, we were both headed home for the Easter weekend. The same bus, different places. I lived in Atlantis, a coloured settlement created by the apartheid government in the 1970s, and he lived in Witsand, an informal settlement at the entry of Atlantis occupied primarily by black people. Both homes the product of apartheid and democracy in many similar but different ways.

As the bus left Salt River, The Black Man with The Bible in His Hand stood up and greeted us in the name of God. The one and real God, because there is just one God in democratic South Africa, and he is Christian. The moment God was welcomed into the Sibanya/Golden Arrow bus packed with people during a pandemic—because how else must working-class people enter the wealthy city center to provide their labor—Siphu and I glanced at each other. We knew what was going to happen. Pentecostals, and practitioners of Charismatic Christianity, are notorious for preaching on trains and buses.

“Don’t wear a mask. You do not need a mask; you just need the blood of Jesus Christ to cover you. It is not the first time that religion, especially Christianity, has encountered COVID-19 in South Africa.” One woman in front of him in an industrial-grade mask tried to refute him by saying he should stop spreading misinformation. But God’s self-proclaimed children are good at silencing. “All you sinners. You sangomas. You prostitutes. It is never too late to come to God. He will forgive you,” The Black Man with The Bible in His Hand said. Siphu rustled in his seat uncomfortably. I took a deep breath, a familiar sensation building in my stomach. We are used to this. The other people in the bus certainly were, too; it seemed like nobody paid him any attention except the two of us. Like clockwork, as if my stomach knew the vile and poison it would soon keep company with, The Black Man with The Bible in His Hand said, “If you are a moffie, it is not too late to stop sinning. God will forgive you.” My stomach lurched; my eyes knew what to do. They knew to glance down so that my eyelids would force the tear ducts closed, so that neither this man nor the other passengers could see the tears I long thought I had cried out. I knew this was coming. This always came. As I glanced at Siphu sitting at my right-hand side, I found him already on his feet. He saw my eyes and told me to move my leg; he wanted to pass into the aisle between the seats. My petitions, out of anxiety and concern that the bus would turn on us, were not enough for him anymore. I know that calling out violence is the right thing to do, but I was scared to call out someone that wielded the word moffie with such godly, masculine authority. But Siphu knew what the word moffie does to gay and queer persons in South Africa. He knew what it did to me. He shuffled past The Black Man with The Bible in His Hand and approached the driver. My stomach and heart were protesting, my eyes still concealing (with decades of practice) the tears that are so often interpreted as guilt and weakness. Siphu returned and, two minutes later, the bus stopped. The driver attempted to address The Black Man with The Bible in His Hand by saying, “Sorry, sir. Can you please stop? Some people do not like the way you are preaching.” Silence.

In shock, the woman in the row of seats next to me declared that the man cannot help it, the holy spirit led him to say what he said. The group of young, colored men at the back, after a day of work, had mixed opinions. One said that The Black Man with The Bible in His Hand should shut up because “not all of us are Christians,” while another said, “we all grew up Christian.” All the while I could feel the eyes on Siphu and me. Surely, I tell thee, it was Siphu who made the complaint. They probably assumed we were a gay couple. My higher-pitched, melodious voice, with my haggard beard and swinging hips. My queerness. Which seemingly cannot coexist with my friendship with a black cis, straight man. Either way, we were deemed Satanists.

Just last week, the murderer of Lindokuhle Cele was sentenced. He got 25 years’ imprisonment for stabbing Lindo to death. Last week Sphamandla Khoza was stabbed and gruesomely murdered. We have a Chief Justice of the Constitutional Court who weaponizes his Christianity. Pastors who fart on congregants to heal them. The separation of church and state in a democracy works well on paper. Just like my masters dissertation, which tried to map out how Christianity is not always a space of violence for gender nonconforming and sexually diverse peoples, but also a space of resilience and beauty and love. Yet the murders, sexual violence, and abuse still endure.

This Easter weekend happened. The bus ride happened. I called my own research into question. Maybe, in the halls of the University of Cape Town and the University of Edinburgh, I had grown too comfortable with an enemy that kills my kin. Why am I doing this work? I had an ally, a friend, speak up in order to protect me from violence. Yet, we risked other forms of violence. My political consciousness or activism, if you will, experienced a crisis. Do I speak up? If I witness this violence again, because I am destined to, do I say anything? If I keep quiet, because I really do not want to be violated, does it make me a sellout? When God spoke, my body remembered how young children of nine years old spoke with the holy spirit, passed on by their parents, and declared me a “moffie.” Years of therapy, years of theorizing gender and sexuality to the point of my Ph.D., and A Black Man with a Bible in His Hand, on a public bus, during Easter, brought me to my knees. To pray? Or because I am just tired? The Black Man with the Bible in His Hand had me thanking God for Siphu and for my ability to recall my breathing techniques when panic attacks swell in my chest. Yet, God had me angry and tired. Angry that the violence and death at the hands of his children. The ones who proclaim moffies and sangomas and “prostitutes” as sinners. Passengers on the bus said that we did not want to hear about our sin. Am I a sin to God? Religious interpretation—violence in the name of God—is killing lesbian, gay, trans, bisexual and intersex persons. They might not have killed me on that bus, but have you ever seen a bus full of people, filled with the ecstasy of God? Ready to defend his words to the sinners, to stone, to judge? Those are who we live with, eat with, ride a bus with. How are we safe? How do I make sense of the love and acceptance so many queer people, including myself, have found in religion? In the Christian religious tradition, Jesus Christ rises. He gets to live by divine ordination. We get killed. 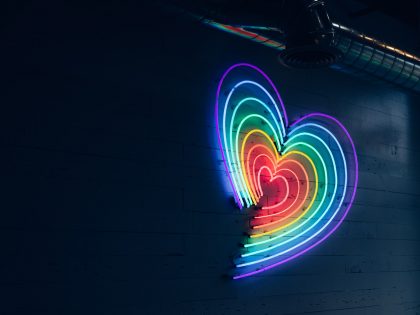 Enough of the ignorance: LGBT+ rights are Ghanaian and human rights, not an attempt by Westerners to impose their values or culture.