Director Teboho Edkins’ cinematic verité, Days of Cannibalism: Of Pioneer, Cow, and Capital, reminds me of a passage from Karl Marx’s Capital, which reads, “If money, according to Augier, comes into the world with a congenital blood-stain on one cheek, [then] capital comes dripping from head to toe, from every pore, with blood and dirt.” In other words, a reminder that the exploits of free-market capitalism remain blood-stained and tethered to an insatiable appetite for land.

A type of grief haunts Lesotho. A legacy of land plundered, labor discarded, and livestock made profane. In Edkins’ latest documentary, footage of cattle chomping the skeletal remains of discarded livestock—a once hallowed creature of Basotho culture, now slaughtered by butchers for sale—offers a foreboding impression of a changing society. In the town of Thaba Tseka, the tenuous promise of economic opportunity for new actors on unfamiliar soil, and their native counterparts in Lesotho, all come into view to provide a fascinating look at the presence of Chinese migrants and their effect on Lesotho’s Basotho people. While Edkins’ oeuvre consists of films that range from documenting gangsters in Cape Town to everyday life in Lesotho, in Days of Cannibalism he returns to Lesotho, a place he lived in his formative years.

The film explores the relationship between settler and native, the daily lives of Chinese migrants alongside footage of Basotho people reckoning with this new settler class of traders. Cannibalism magnifies the social costs of capitalism. For the people of Lesotho and Chinese traders, commerce is cannibalism too. It destroys every living thing, from humanity to the animal ecosystem, and its power of dissolution is infinite. As Edkins puts it, “If people start actively eating and buying from one another, it is an act of cannibalism.” The world Edkins sketches out includes both the hardships and small joys of living in Lesotho. For Edkins, the small Southern African country landlocked by South Africa provides an impressive backdrop for a more in-depth exploration of the global economic forces leading Chinese merchants to the continent of Africa.

In the moments Edkins captures, Chinese merchants remain insular and understand the advantages of living in Lesotho. As one Chinese man put it, “Life is good here. There is nowhere to spend money.” However, the trade-offs are not one-sided. In one scene, a Chinese shopkeeper talks about his son, who he left behind to be raised by his grandfather in China.

Discussions of Basotho tradition and culture by a charming radio host and scenes of everyday life provide an inlet into the lives of Basotho grappling with social shifts and extreme economic uncertainties. In an early scene of the film, a horse race through the rural landscape draws young and old draped in balaclavas. It offers a fuller picture of life in Thaba Tseka, rather than the struggles of everyday living and poverty that many rural-dwelling Basotho contend with. A memorable scene comes to mind when a group of revelers congratulates the winner of the race by announcing, “That’s how you ride a horse. The nation’s pride.” Similarly, footage of Chinese migrants in their compound eating, cooking, and playing mahjong aims to draw back the curtain on the contemporary Chinese experience in Africa by demystifying the daily life of Chinese migrants, struggling to make a living in an unfamiliar place. In contrast, in a meeting hall, a group of Basotho men play cards and drink beer, while another plays the accordion, singing acapella while describing the exploitation by Chinese factory owners. Another shot finds a worker call in to a popular radio station Mojodi FM, to tell of a potential strike because of unfair wages in Chinese factories.

A common theme in the documentary reveals how economic disparities, inequities, and opportunities occur side by side. A standout scene, where two Basotho men arrested for stealing cows, most likely for Chinese buyers, admit in front of a judge that their acts were compelled by wide-spread unemployment, especially in the mining industry in Lesotho. The arrested men are ultimately sentenced to jail time. In response, the presiding judge says, “We need to give you a sentence that shows the court that this is not a playground. So each of you will be sentenced to ten years in jail. No fine is possible.”

The cow’s transformation as a cultural symbol of significance to a commodity of exchange is the central message of the film. It serves as a reminder that the pedestrian conflicts that rest beneath the surface of daily exchanges between Chinese merchants and the Basotho make for an intriguing watch, but the omission of context and history veil critical vestiges of colonial and military rule, now removed for new risk-taking entrepreneurial settlers of a different time and order. As one person in the film puts it, “My countrymen, stop christening the nations, this cow will eat and finish them all.”

In Basotho culture, cattle possess a sanctimonious value or character, despite this, herders remain in the background. Too often the director flattened the lives of the Basotho in exchange for scenes of public reproach. This position tended to muffle the agency of the people of Lesotho and reinforce a stereotype of victimhood. A scene with a young Mosotho boy admonished in the street by an elder for riding a horse without documentation, or footage of police lecturing crowds about cattle theft pushes Basotho agency into the background, with the narrative of victim and aggressor at the fore. At the film’s end, the director unexpectedly captures a violent robbery in a Chinese wholesale shop. The filmmaker, shopkeeper and workers fell victim to the act, a scene that vividly evoked the film’s sense of desperation in real time.

The best films help us see the world through someone else’s eye. We identify with their plight, daily struggles, happiness, and hopefully appreciate their life’s journey. Days of Cannibalism, reflects the bleak realities and contradictions of social and economic change in Lesotho and provides a rare and candid look at the impact of new capital in rural Africa.

The film “Forgotten Kingdom” has become one of the most powerful representations of Lesotho. Does it get it right? 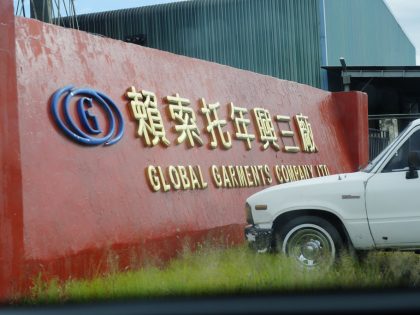 Lesotho’s media and the “problem” of Chinese immigrant shop owners.