How should we read the mounting disenchantment that produced the conditions that made #EndSARS an agonizing reality? One possible answer is to read the multiple signs left in the wake of the protests, and try to decipher the semiotic codes invested in them—but not before moving beyond the fact that the police apparatus is the most brutal expression of the violence of the Nigerian postcolonial state. As I have argued elsewhere, the Nigerian police exist as a self-contradictory institution that misreads the pragmatics of the friendliness it aspires to.

Although hashtags are generally performative and rhetorical, three levels of significations may be discerned in the #EndSARS protests. These include meanings in visual, rhetorical, and symbolic domains. These cohere around the idea of #EndSARS as a movement consolidating the prior activist labors of civil society in Nigeria, that is if we are to eschew any ahistorical zeal that misrecognizes past struggles.

The visual field emerges, for example, in a banner that reads: “to be modern is not a crime.” Together with those of many other posters and banners, this message welcomes the gaze both on smartphone screens and at actual protest locations—from Lekki to many other places in Nigeria and around the world. The banner aptly summarizes the generating impulses of the #EndSARS protest, namely the layers of discursive contestations around the meanings and contradictions of both the digitally modern subject and the digital media objects that mark their global subjectivities.

At the heart of the protests, therefore, are the social and political signs that become entangled with the uses and perceived abuses of digital technologies. Media anthropologists, such as Richard Vokes and Katrien Pype, have reminded us that the social meanings as well as the many usages of media objects are dialectically related to experiences of daily routine. Everyday life enacts social spaces and relations in which media objects accrue meanings. In this understanding, objects, such as the Internet and the smartphone, play important roles in the constructions of persons, and the understanding of personal and collective histories. In the case of Nigeria, the fact that media objects are implicated in the resistance politics of #EndSARS is indicative of how technologies, such as the Internet and laptops, have some telling resonances in relation to the Nigerian youth.

The specific vernaculars of these digital technologies are most legible in the essentialist image of the Nigerian Prince; himself, a media construction in the global cultural imagination. The Special Anti-Robbery Squad (SARS), recently disbanded, comes into the framework of this social circulation of technologies, as Internet fraudsters or “Yahoo boys” use ill-gotten money to buy cars, laptops, and other signifiers of materialism. As SARS targeted anyone who appeared to be richer than they should be, or who carried a laptop or iPhone, the resistance to its activities was inevitable.

#EndSARS may then be read in this context as a resistance to the political constructions of global media objects whose possession is twistedly encountered by the materialist as a precondition for modernity. To resist SARS is to push back against state forces that make being modern a crime. That said, even as several banners read “#iPhone, Laptops, styled Hair and Living Fresh isn’t a Crime,” we know that #EndSARS transcends the ideological misreading of this tiny section of the dissident youth who equate laptops and iPhones with modernity.

But there also exists a rhetorical dimension to the meanings of #EndSARS, which is most visible in the Yorùbá expression Sòrò sókè. #Sòrò sókè is the imperative to speak loudly, but that translation doesn’t capture the loaded cultural meanings of its deployments in the context of #EndSARS, where it manifests as the linguistic urging to speak up against the brutality and coercive expressions of state power that police and policing in Nigeria symbolizes. When a protester avows that “I can dress the way I want,” they not only speak up against the impositions of police brutality, but also express disaffection with the larger hegemonic structures of culture that constrain their agency and power of self-determination. #Sòrò sókè becomes understood as the performative displacement of uncritical silence, as a gerontocratic political elite that expects subservience from the young is subjected to the explosive voices of a demographic that potentially wields enormous political power, but lies in perilous proximity to irrelevance. Until now, perhaps.

As you may have already guessed, these last connotations already gesture at the symbolic implications of #EndSARS, as the movement rightly becomes synonymous with the resistance against bad governance and the established corrupt order in a country whose wealth remains an unchanging potential, and whose citizens bear the brunt of a thieving political class that normalizes institutional brigandage.

Perhaps, the most striking image of #EndSARS is the morbid theater of protesters singing the Nigerian national anthem in the pitch darkness—allegedly orchestrated by state agents after a power cut and the removal of CCTV cameras. Naturally, to sing the anthem should have evoked national pride and signaled how nations are produced through such performances of mythologies. Yet, to do so while being shot at and killed by the Nigerian military establishment meant for those who are now missing and/or dead because of the Lekki event, the anthem was a ritual elegy of self-immolation. They sang a nation-state that denied their rights of protest and existence, that extinguished their rights to have rights at all.

The three signifying fields collide in their indictment of the Nigerian state. Visually, the darkness of Lekki reminds us of the blackness many will still have to confront both infrastructurally and culturally, while the needless contestations around whether what happened at the toll gate was a “massacre,” “killings,” or “genocide” rhetorically perform the uncertainties of life in a country in which human lives are sometimes precariously unnumbered, uncountable and unvalued. The tragedy of it all is that both are reiterations of the overall symbolism of #EndSARS—the Nigerian human is a tree that falls in a forest and nothing makes a sound. Again, until now. 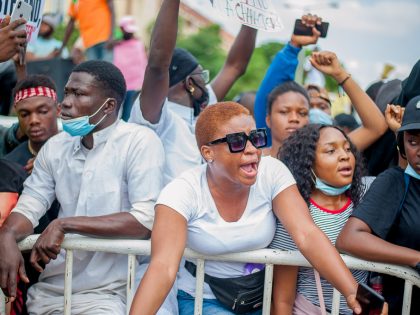 Nigeria’s movement against brutality and poverty

The background to the #EndSARS protests and celebrating a movement that challenges Nigeria’s ruling class.