Sometimes, you wait and wait for South Africa’s Department of Science, Arts and Culture (DAC)—and nothing happens. No, for once I’m not talking about the still-problematic artists’ relief fund, but about the failure of the Department to acknowledge the passing of a titan of South African drums, Gilbert Matthews.

Since then, stage artist Mary Twala and director-actor Welcome Msomi have both passed, and DAC has been prompt—quite rightly—to mark their passing.

But for Bra’ Gil, who brought credit to South Africa from a host of international jazz stages, the official silence remains deafening. Maybe the Department doesn’t know who he was? In that case, it’s time to tell them.

Gilbert Matthews was born in Graaf-Reinet in the Cape in 1943. Veteran trumpeter John Ntshibilikwana, his relative, recalled: “Because of the poverty there, it was virtually impossible for people to acquire instruments. If you wished to play guitar, you had to take an oil tin and make a guitar out of it. That is how Gilbert started—with a paraffin-tin guitar!”

Despite these straitened circumstances, Matthews’ guitar-playing was good enough for him to begin playing professionally, eventually securing work at the first (there have been several successors) Tiffany’s Club in Cape Town, where he taught himself to play drums and switched instruments. His playing caught the ear of the city’s jazz elite, and in the late 1960s he featured on Ibrahim Khalil Shihab (Chris Schilder’s) “Spring.”

After those sessions, he travelled to the United States via London.  He was mentored by both Max Roach and Elvin Jones, secured an 18-month engagement as Ray Charles’s regular drummer, and also worked with Sarah Vaughan.

But home called. By the mid-1970s, he was back in Johannesburg, gigging with the then-Dollar Brand, Kippie Moeketsi and more. He worked in the house band of the “Black Mikado” musical staged at Diepkloof Hall in Soweto, and as a session musician on various tours, including what he found a particularly dispiriting series of hotel gigs in Swaziland.

On his return, he began making South African jazz history, calling his Black Mikado band-mates and others together to form Spirits Rejoice, named in honor of an Albert Ayler recording. Spirits aimed to create the kind of imaginative, exploratory jazz and fusion music that Earth Wind and Fire, Weather Report, and others were pioneering in the US.

Spirits Rejoice was not only a band, but a symposium and university for a whole generation of South African modern jazz players. Its first incarnation included Bheki Mseleku, Robbie Jansen, Duku Makasi, George Tjefumani, Thabo Mashishi, Sipho Gumede, and Russell Herman; later incarnations included Mervyn Afrika, Khaya Mahlangu, Paul Petersen, Themba Mehlomakhulu, singer Felicia Marion, and later the whole vocal lineup of Joy. For the much younger Mahlangu, it was the innovative approach of Spirits that inspired him: “It was a beautiful learning experience”, with Gumede, to want “to do stuff like that—but in a more African context.”

The band released two albums, African Spaces in 1977 and the self-titled Spirits Rejoice in 1978 and won, according to pianist Mervyn Afrika, nine Sarie Awards: the highest honors open to South African popular musicians at the time. According to the late Ezra Ngcukana, “They were a very high-powered band. They made history.”

But despite these accolades, and some residencies—including at Cape Town’s Sherwood Hotel, Beverly Lounge, and Landdrost Hotel in Lansdowne, as well as legendary jazz spot, Club Montreal in Manenberg—respect and the freedom to innovate further were scarce as the 1970s came to a close.

In 1979, Matthews left for Sweden. There, he married and established an extremely distinguished career that let him stretch his innovative vision out further. He worked regularly with the group of saxophonist Christer Boustedt, and, after the reedman’s death, re-established it as The Contemporary Bebop Quintet. Additionally, he worked with Chris McGregor’s Brotherhood of Breath, regularly with Archie Shepp, and with Mischa Mengelberg, Roscoe Mitchell, John Tchicai, Albert Mangelsdorff and Charlie Mariano, among others.

He was the drummer on the SA Exiles Thunderbolt recording, and on bassist Johnny Dyani’s revolutionary Born Under The Heat.

Matthews was playing and recording in Europe, always in distinguished company, well into the twenty-first century. But in recent years, ill-health gradually imprisoned him away from the stage.

There can be no better way to end than with Matthews’ own description of the soaring improvisatory fusions that Spirits Rejoice pioneered: “It’s like a game … we play anything that is in our heads and later rearrange it into a meaningful tune. At first, it sounds like some mad musicians just making noise with their instruments. The, later, we remove the noise, and all we are left with is music.”

For the South African cultural landscape, Matthews and Spirits Rejoice did indeed make history. Now, indeed, all we are left with is the music. Hamba Kahle to a visionary of our jazz scene: may his spirit rest in peace and rhythm.

The soul is dialectic

Drummer Asher Gamedze’s new album is a groundbreaking body of work in the musical trajectory of South African jazz.

Black Lives Matter protests build on a long history of anti-racist solidarity and struggle across the Atlantic. 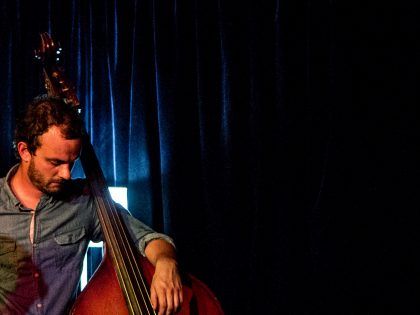 A lot of room for improvisation