In 2012 former Botswana president, Festus Mogae, gave a talk in Ghana on “African governance.” During the question and answer session that followed his remarks, Mogae was asked: when seeing what was happening in Zimbabwe, why did African leaders choose to remain silent? Why did leaders refuse to admonish a leadership that was killing its people? His response, in summary, was: Zimbabwe was like a relative that you know is making mistakes. You can tell them to change their ways in private, but you cannot force them to see reason. Almost ten years later, nothing has changed in Zimbabwe. And in the face of a global pandemic, the African Union’s silence is a death sentence.

Zimbabwe’s government went from openly mocking countries shutting down in response to the COVID-19 pandemic, to begging the international community to fund its national response. Once funded, the health minister ignored healthcare workers’ demands for better personal protective equipment (PPE) and improved working conditions, while actively over-inflating the pandemic budget in order to plunder funds from the nation’s nearly 15 million people. State hospitals in the country’s capital are barely equipped to manage the pandemic; the rest of the country’s healthcare infrastructure is severely understaffed, under-equipped, and on the precipice of a public health disaster that will leave many exposed, if not dead. The state has decided it does not care whether Zimbabweans live or die. And it appears, neither do President Emmerson Mnangagwa’s relatives.

The government has arrested, abducted, and tortured citizens for speaking out against the administration’s failure. Journalist Hopewell Chin’ono was abducted, later confirmed as arrested, and is facing trial for “incitement to participate in public violence.” In reality, Chin’ono’s crime is exposing state corruption and looting of the country’s COVID-19 funds.  Chin’ono demanded transparency, accountability, and encouraged citizens to engage in peaceful protest until the former two demands were met. The calls were made on Twitter, in a country with only 56.5% internet connectivity and likely very few Twitter users. If Twitter activism makes the government this uncomfortable, one can only imagine what else they are trying to hide. In particular, women face the brunt of the government’s draconian retaliation. Police violently beat women in Bulawayo for violating curfew. Police arrested activists calling for a stop to constitutional amendments that are being pushed through without sufficient citizen consultations. And most recently award-winning author Tsitsi Dangarembga and opposition party spokesperson Fadzayi Mahere were arrested along with many others for holding a peaceful, socially distanced demonstration again calling for an end to government violence and persecution.

A national 6 am to 6 pm curfew has been in place for several weeks, and police have been swift to enforce it, even chasing citizens out of the cities at dusk.  The government banned independent public transportation in the wake of the pandemic, only permitting state-run buses to operate. The buses cannot ferry the volume of people who need transportation out of town, and they are certainly unable to do so while observing social distancing guidelines. Furthermore, the police and the army have become a staple in the Zimbabwean urban landscape. What is taking place in remote parts of the country where Twitter and the internet are not present?

President Mnangagwa’s relatives remain silent, as does the African Union. The silence is infuriating. It should be enough that Zimbabweans are dying. But they are dying at the hands of their “liberators,” the men—and women—who waste no time claiming that they fought for the country’s freedom, and only they have the right to determine the scope of that freedom. The Zimbabwe African National Union – Patriotic Front (Zanu-PF)—the ruling party since independence in 1980— has robbed Zimbabwe’s real heroes of their legacy; they walked them into a bigger cage and said self-determination was the same as liberty. It is not and, now Zimbabweans are forced yet again to fight for their freedom.

Should we have seen the oppression coming? Yes. There were many red flags, the massacres of thousands of innocent people in Matabeleland in the 1980s, the violence that preceded the land reform program, the brutality that accompanied the 2008 elections. Only two years ago, the army shot citizens in broad daylight in the middle of the street, and no one has been held accountable! Each one of these incidents showed how little the country’s leadership valued Zimbabwean lives. They should have also been warning signs to an African Union that has “committed to [an] integrated, prosperous, and peaceful Africa, driven by its own citizens.”

The sad reality is that many of our presidents are also waging war on their people and tolerating the revival of a slave trade in Libya. With few exceptions, Africa’s patriarchs have proven to be interested in their priorities first, to the detriment of the continent’s peoples. Now, no one will save us but each other.  We cannot look to parties like Zanu-PF because, in many ways, their work is done. They were necessary to achieve self-determination, but they have proved incapable of facilitating self-actualization. We need a new path, the people’s way. Zimbabweans, Cameroonians, and many others across Africa need a different union, one that is willing to defend and protect all of our rights. Our lives, our future, and that of any generation to come, depend on it. Zimbabweans need your solidarity at this moment to stand up to the system that has broken the country. May your willingness to stand with us signal the emergence of a more powerful people’s Afrikan Union, one that protects us all. 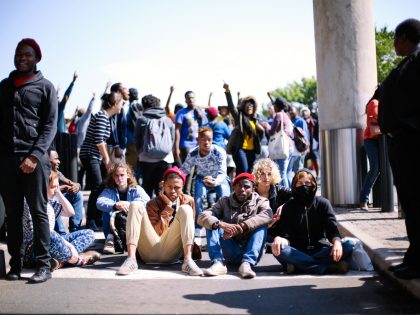