In its reports and PR material, the global mining industry continually promotes the idea that industrial mines help improve local African living standards through the provision of new jobs and higher worker incomes than those earned in the surrounding economy. The industry-funded World Gold Council, for example, has argued that “gold mining companies pay significantly more than typical local wages … [in] Côte d’Ivoire or Mongolia, the lowest paid mine worker will on average earn 3.5 times more than the typical local wage, and may earn almost seven times more.” Similarly, the industry-funded International Council on Mining and Metals (ICMM) has claimed that across the global south, including in Africa, “the jobs generated directly by the sector tend to be better paid than alternative jobs” (see here, here, and here for other recent examples, from mining firm corporate sustainability reports).

But how well do these claims stand up to scrutiny? The short answer, according to findings from my recent research, is not very well at all. Through a case study of gold mining in South Kivu Province in the Democratic Republic of the Congo (DRC), my research suggests that—contrary to industry claims—most industrial mine workers earn wages less than or comparable to the incomes earned by informal artisanal mine workers in the surrounding economy. Meanwhile, a narrow and predominantly externally-oriented managerial class has been the main beneficiary of the increased wage polarization and inequality induced by the arrival of foreign corporate-led industrial mining.

In 2012, Twangiza—managed by the Canadian corporation Banro—became the first industrial mine to enter the production phase in South Kivu following the official end of the Congo Wars in the early 2000s. The mine is located in the government collectivity of Luhwindja. Mbwega, Luhwindja’s largest artisanal mine, was forcibly closed in 2010 to make way for Twangiza’s construction. Yet despite Twangiza’s far greater productivity compared to artisanal mining, in 2017, 822 of Twangiza’s 1,149 workers (or 72 percent) earned monthly wages of $270 or less that were broadly comparable to artisanal worker incomes (Table 1). In addition, the lowest paid unskilled Twangiza workers—of which there were 169, or 15 percent of all workers—earned $110 per month, significantly below artisanal worker incomes. 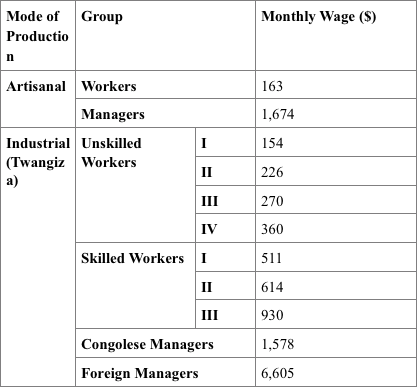 The clear beneficiary, from the data presented in the above table, was Twangiza’s foreign managerial class (predominantly comprised of South Africans and British, at the upper levels). Representing just five percent of employment at the mine, this group captured 34 percent of the total wages accruing to labor at Twangiza and two-thirds of the wages accruing to managers (despite representing only one-third of all managers at the mine).

Three factors help explain this finding. First, nearly half of the Congolese managers were at the lowest managerial level of supervisor, where wages were comparable to the incomes earned by artisanal shaft managers. Second, foreign managers at Twangiza Mining only paid a 10 percent tax rate, compared to the 30 to 50 percent rate paid by Congolese managers. Third, foreign managers earned a “double salary.” As a former financial manager at the mine explained, “take a Congolese and an expatriate director. The difference is the expatriate has two salaries. They have one in Congo and one overseas.” This account was confirmed by company payrolls. When accounting for both their “double salary” and their lower tax rate, foreigners were effectively earning more than double their Congolese counterparts for an equivalent position.

In addition, while artisanal mining incomes were consumed and invested locally in Luhwindja, industrial manager wages were spent largely outside of the local area, and for foreign and some Congolese managers, almost exclusively outside of the DRC. Fed and lodged on-site, foreign managers were flown in and out of the mine, and rarely stepped foot off-site while on duty. As one explained to me, “… we stay on site, we spend very little … I’m investing back home.”

As a result of the uneven distribution and expenditure of industrial mining wages— conjoined with an overall decrease in locally available mining employment following the closure of the artisanal Mbwega mine—my data suggested the total amount of mining income earned, consumed and invested in Luhwindja decreased by around 40 percent between 2010 and 2017. While no more than an approximate estimate, this impression was supported by the many testimonies from local farmers, herders, teachers, hospital workers, priests, civil servants and youth, who in conversation consistently foregrounded the relative strength of the local economy in Luhwindja prior to Banro’s arrival.

Based on the findings, the industry claims that foreign corporate-led mining (re)industrialization in Africa improves local living standards by providing fresh employment and driving higher wages is problematized. On the contrary, Banro’s entry into Luhwindja’s mining economy appears to have led to an overall deterioration in local conditions, due to the forced displacement of artisanal mining, and the failure of industrial jobs or higher industrial worker wages to compensate for this displacement.

In Burkina Faso’s mines, the differences between local and foreign workers are significant, especially what they get paid.