This post is the introduction to our series “Talking back: African feminisms in dialogue.” It is dedicated to guest editor Rama Salla Dieng‘s late sister, Ndèye Anta Dieng (1985-2019).

Françoise Kpeglo Moudouthe, from Cameroon and France, is the curator of the feminist platform Eyala, an activist, and a consultant. In this interview, she talks about her experience with gender and development, her work on her blog, and self-care.

Hello Françoise, would you describe yourself as an Afro-feminist? An African feminist? Why and why not?

I call myself an African feminist—simply because I identify as an African woman first, and I wouldn’t know how to be a woman who is not a feminist. Having lived in France for about a third of my life—a country that gave me an education and a very practical passport, among others, but also my first encounters with racism—I have a lot of respect for what Afro-feminism has done for women of African descent across Europe. However, I’m not fully embracing Afro-feminism because I don’t think it’s making enough of an effort to connect with the African feminist movement.

What does it mean that you self-identify as a feminist?

To me, being a feminist is about three things: understanding, action, and sisterhood. So, when I self-identify as a feminist, I first mean that I acknowledge that this world I live in robs women from their power in more ways than I can count, and that this is by design, not by accident. Secondly, being a feminist means that I’m doing something about it at two levels. I do so professionally, through my work as a consultant on women’s rights and through my platform Eyala, but also in my personal life, in the way I interact with others and even the choices I make for myself. And thirdly, being a feminist means being part of a movement of African women who work towards achieving the same goals.

You worked in advocacy for girls’ rights before, what lessons did you learn from that experience?

I learned so much from the eight years I worked at Girls Not Brides, the leading global partnership to end child marriage (first as part of the small team that created Girls Not Brides, and later as the organization’s Head for Africa Engagement). The biggest lesson I’ve learned is that there is no real change without partnership. The issues we are addressing are too widespread, their impact is too devastating, and the stakes are too high for any of us to work alone.

I think most organizations understand it now, but still have a tick-the-box approach to partnership. We still work in silos, even though we know the challenges girls face are intertwined. I think we need to foster not just partnership but solidarity, all the way to the individual level. That’s one of the reasons I created Eyala—to create a space where we can have the vulnerable yet critical conversations that will help us build the sisterhood we need if we want to dismantle patriarchy.

You wrote that you created Eyala in order to ask the following questions: “What does feminism mean to the African women who champion it every day? What experiences drove them to activism? What is their vision for change? Who do they look up to? What trade-offs and compromises have they had to make?” Today I direct those questions right back to you. Please answer them.

Aha! I don’t often get to be on this side of the questions. Thanks for the challenge! Okay, let me take these one by one:

What does feminism mean to me? I think I answered that above.

What experiences drove me to activism? There were three defining experiences. I grew up in Cameroon in a middle-class family, so I had a lot of privileges, but my mother was consistently letting me know that other children were not as lucky to go to school, to have three meals a day, etc. As a result, I grew up thinking about inequalities and injustice, and wondering how I could help other children. Then, my family moved to France when I was a teenager, and that was my first real encounter with discrimination. To be judged, belittled and underestimated because of the color of my skin, and to see the toll racism and sexism took on my mother, stirred up my activism. Lastly, as a young professional, I was asked to help define a strategy for how The Elders could promote gender equality. I dived into months of research, and I couldn’t believe the extent and the impact of violence against women. I once heard Graça Machel say that the common denominator to all acts of gender-based violence was the fact that women were seen as “second-class citizens,” and that was an “a-ha” moment that put everything into place for me. My professional assignment became a life mission, and I evolved from being an advocate to being an activist.

Who do I look to? I could share a long list of people whose writing and life journeys are inspiring to me, from Nawal El Sadaawi to Leymah Gbowee. But I must say that I am most inspired by the African feminists whom I am privileged to speak with on a regular basis, because they show me that living by our values is possible. And that’s a long list, but to name a few: Nebila Abdulmelik, Nana Darkoa, Yvette Kathurima, and Flavia Mwangovya. I am also grateful to the women who have mentored me into feminism through what must have been just simple conversations to them: Amina Doherty, Nyaradzayi Gumbonzvanda, Naana Otoo-Oyortey, and Graça Machel. Some of the women I follow online have influenced me a lot, especially Minna Salami and Jessica Horn. Last, but not least, I have to mention my mother, who has taught me everything about resilience. I’ll stop here but I’m not finished!

What trade-offs and compromises have I had to make? Being a feminist has led me to question a lot of the values and principles I was brought up on, so I’ve had to say no to people I love deeply, to call them out on their misogyny, or simply to let them know that I needed to reshuffle the cards in our relationship.

What is my vision for change? I am convinced that as women and as feminists, we need to invest more in building sisterhood within our movements for gender justice. Patriarchy, this beast we are fighting, is way too pervasive, too destructive, and too creative for us to work in silos. We need to join forces and we need to lift each other up or we don’t have a fighting chance. That’s why I created Eyala.

How do you reconcile your work with Eyala with your other activities?

Eyala really started out as a passion project, but I soon realized that passion projects require just as much commitment and work as the work that pays your bills. I try to reconcile by being better organized, but it’s been a balancing act, especially because I want to protect my time with my family. I also try to weave the two strands together as often as I can, for example by consulting on projects that are relevant to Eyala’s work, or by recording interviews or hosting a feminist discussion circle on the sides of a work trip.

If you were to cite three life lessons that you learned from interviewing African feminists, what would those be?

First, there is not a single “African feminism.” Every woman I have interviewed has said she is a feminist and has proceeded to give me yet another definition of what that means to her. What I learned from that is that we shouldn’t let our movement be limited by labels that are too narrow for our brilliance! I’ve also learned that saying “the personal is political” doesn’t just mean putting issues that are traditionally considered private on the political agenda. It also means embodying our feminist politics in our personal lives. A third lesson I’ve learned is that being a feminist is a journey. There’s so much learning and unlearning for each of us. No one has it all figured out, and mistakes are bound to happen. That’s why I’m weary of the call-out culture that’s striving today, especially on social media. As a movement, we need to learn the balance between holding each other accountable and giving each other space to go through the motions of learning.

How do you live a feminist life and how easy is it to achieve in Africa?

To me, the key has been to be intentional about aligning what I think and how I live on a daily basis. I think of “feminist” as an action verb. I feminist in my kitchen, in my family meetings, in my bedroom, in my kids’ playroom, during work meetings, and as I walk the street. I do so in the way I carry myself and in the ways in which I interact with men and women around me.

But I just said, it’s a journey—for women everywhere, though as African women “feminist-ing” might be harder because it’s seen as a rejection of our cultural heritage. I simply try to be as honest with myself and transparent with others, and to let go of people who want to keep me in a box I no longer fit in.

What acts of radical self-care do you practice?

I try to carve out time to be alone—periods of time when I’m only accountable to myself and when my well-being is my priority. As a mother, a sister, a friend, and a wife, I spend a lot of time making sure everyone is feeling okay, but I have recently learned that taking care of myself is not an indulgence but a necessity. Once a year, I take a week-long solo vacation. It’s glorious!

What does a feminist future look like to you?

To me, a feminist future is a world where being treated with dignity is a right, not a privilege, for women everywhere, and particularly in Africa. 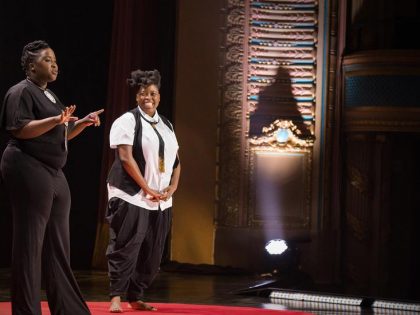 The Hub of Loving Action in Africa (HOLAA), promotes conversations about African experiences with sex and sexuality.