Ever since Bobi Wine, Uganda’s biggest pop star, won his seat in parliament in a contested 2017 race, western journalists have flocked to the country’s capital, Kampala, to conduct interviews with and profile him. The interest is certainly justified: in a short time, Wine, real name Robert Kyagulanyi Ssentamu, has turned a decade-long career in music, often addressing the problems faced by Uganda’s poor, into a political movement of which he is, undoubtedly, at the center (and what that has the Ugandan state nervous). He has announced he will challenge President Yoweri Museveni for the presidency in 2021. Far from replicating the conventional trappings for which western journalists are often criticized with regards to reporting on Africa and its politics, reporting on Wine has presented a rather distinct challenge, one that reinforces a formidable challenge in Uganda political history.

In June, at a cafe in Kololo, Kampala, I spoke with Moses Khisa, Assistant Professor of political science at North Carolina State University and a regular contributor to Uganda’s opposition newspaper, the Daily Monitor:

I’ve been fascinated … by the overwhelming interest, and perhaps even obsession if I may put it that way, with Bobi Wine. So, I keep asking myself “Why? What is it that you see that I, as a Ugandan, haven’t quite figured out?” Okay, so I know that this guy is a celebrity, he appeals to young people, he’s a new kid on the block … But I have never in my lifetime seen such enormous western media interest in an African politician, let alone a Ugandan politician … Almost every media house that matters has been reporting on Bobi Wine.

Though my own reasons for focusing on Wine have certainly changed, for many western journalists (especially those who spend very little time visiting, let alone living in, the countries they report about), Bobi Wine represents the latest shiny new object through which to grow by-lines. The nexus of music, politics and Africa where Wine resides, makes for a rather sexy subject matter that can grab a readership interested in any of those areas. It certainly doesn’t hurt that Wine is quite handsome, has an incredible voice, catchy songs, an absurdly cool joie de vivre that gets pronounced by his slight, purposeful limp, and a political lexicon as aesthetically radical as the red berets worn by his movement, People Power. But for Khisa, as for many Ugandans, including People Power supporters and Wine himself, the singer-turned-politician represents little that could be considered new for the national political landscape.

These parachute journalists also make elementary mistakes. For example, journalist David Pilling, in an article based on his interview with Wine in Kamwokya, and published in The Financial Times in July, not only confused the ingredients of his own lunch, but also one of Wine’s associates. However, the bigger problem with the FT coverage, and many of the outlets that have reported on Wine, is that they fail to deliver anything of substance or context regarding the nuances of Uganda politics and the challenges facing Wine and People Power. With few exceptions (one being Helen Epstein’s reporting in The New York Review of Books), the only context usually included in interviews with and short profiles on Wine are the one or two lines devoted to Museveni and his 33 years in power, often written in the same brain-numbingly similar formula.

While it could be convincingly argued that the mountain of media attention heaped on Wine has benefited both himself and his movement by assuring his continued safety, his rise and People’s Power’s significance within Uganda’s post-colonial history is vastly more complex than western journalism represents. In focusing strictly on Uganda’s “Ghetto President” (as Wine likes to be known) and merely mentioning his autocratic rival, Museveni, readers are led to construct a simple, bipolar model of young vs. old, good vs evil—a pitched political battle between two equal and opposite forces. This could not be further from the case. Most significantly, and as someone who has spent considerably more than a few days in Uganda researching the Ugandan political landscape, there are other political actors to consider. Take Dr. Kizza Besigye and his Forum for Democratic Change, which prior to the emergence of Bobi Wine and People Power, were the primary force of Uganda’s opposition.

Besigye, a former army officer, medical doctor and one-time confidante of Museveni, has until recently been the most prominent opposition leader. For his troubles, he has faced multiple arrests, is likely under constant surveillance, and he and his supporters have been subjected to violent attacks by the police. Besigye has been, and remains, a critical figure on the Ugandan political landscape. So much so, that many believe Wine’s success in defeating Museveni depends on Besigye’s cooperation in forming a coalition that could front a single candidate.

When I spoke with Nabilah Ssempala, the MP for the Kampala Women Parliamentary Constituency and so-called “rogue member” of Besigye’s Forum for Democratic Change, she illuminated further the nature of Besigye’s relationship to People Power.

It’s existed since independence, people power; but with different generations it has dawned different clothing. But it’s generally the hope of Ugandans for a better government, for better policies and for fundamental change. Even President Museveni in the bush days, he dawned the people power … [Nasser] Sebaggala, who was a very popular mayor [of Kampala] … he got that baton for some time, which he handed over to Besigye.

In other words, and as I heard it many times, Besigye was People Power before People Power was People Power. Besigye has, in fact, consistently been the runner-up in all four presidential elections since multi-party dispensation was restored in 2005, receiving a high of 37% of the vote in 2006. It is true that we can never know the real vote counts of elections in Uganda where every public institution—from the Electoral Commission, to the police and military, to the Supreme Court—rests firmly in the grip of Museveni’s tentacular authority. Besigye’s electoral performance, in spite of this corruption, is all the more impressive.

Plenty of others, including Besigye himself, have so little faith in the democratic process —being of the belief that President Museveni, through various institutions, has rigged some or all of the presidential and parliamentary elections—that the notion of a coalition as a solution to the problem is laughable. Still more, like Ssempala, believe Besigye has developed the same narcissistic tendencies inherent to the despot he has for so long tried to unseat, and that his own desire for power will prevent him from forming any coalition or falling in behind Wine’s People Power front. This is, perhaps, one of the reasons undergirding the emergence of the latest political force in Uganda, a breakaway from the FDC: the Alliance for National Transformation led by General Mugisha Muntu.

These details, critical as they are to understanding Bobi Wine’s chances going forward, are not what you would read in the Financial Times, let alone the Los Angeles Times, The Guardian or any other mainstream publication. There is also little or no mention of others who have more recently aided in the opposition to Museveni’s regime. For example, Francis Zaake, the MP who was arrested and tortured on the same day as Wine; or Ziggy Wine, the People Power musician who was abducted and then died shortly after his body was dumped at Mulago Hospital; or the nearly thirty opposition politicians and supporters (including the MP’s Kassiano Wadri, Gerald Karuhanga or Paul Mwiru) who were arrested in Arua in August of 2018 and continue to face trumped-up treason charges.

Nor do mainstream publications broaden the discussion of Wine’s political movement, and therefore, readers are precluded from understanding what People Power is—and what it is not. Some attention has been given to Wine’s views on homosexuality, which—from what I have seen and heard—seems to have undergone a shift. Though People Power lacks an overt policy recognizing LGBT rights, it is far from participating in the violent anti-homosexual rhetoric that is pervasive in Uganda’s Parliament. Reporting on policy positions beyond this, which has always been more focused on Wine’s personal sentiments than on his movement, are virtually nonexistent. Admittedly, People Power as a political organization (Wine and his affiliates would object to this label) suffers from an extreme lack of policy.

Apart from rhetoric regarding corruption, unemployment, and the need to build stronger, independent institutions, People Power offers little in terms of a substantive or divergent agenda. This does not, however, necessarily make them an outlier among Uganda’s political parties. If one cannot envision wielding power, knowing what to do with it becomes a rather difficult hurdle. Hence, People Power’s primary message of uniting across identity groups—a closing of the fist as it were—to coalesce around the collective aim of unseating Museveni.

People Power’s mission is what its name implies, a realization of the supreme agency of the masses. But what happens after? If the pressure that accompanies journalistic attention could force Wine to reconsider his views on homosexuality, could not this same attention provoke deeper considerations of policy on the part of his movement? Perhaps such policies—whatever they may be—that might strike at the heart of Uganda’s perpetual strongman problem?

For mainstream publications and the drop-in journalists who write for them, Bobi Wine is the sole star of the show. For whatever number of obscure reasons—naiveté, a lack of resources, or just plain journalistic vanity—painting a more nuanced portrait of Uganda politics remains outside the interests of mainstream western publications. In this way, mainstream publications reinforce the condition from which Ugandan politics has suffered since independence. While there is certainly much that can be said—too much to say here—regarding the colonial origins of strong man politics, it is worth questioning the ways in which contemporary journalism is complicit in its continuation. If journalists are to be truly dedicated to the practice of speaking truth to power—whether that journalist be western or that power be African or not—is it not worthwhile to get to know the subtleties and complexities of that power? 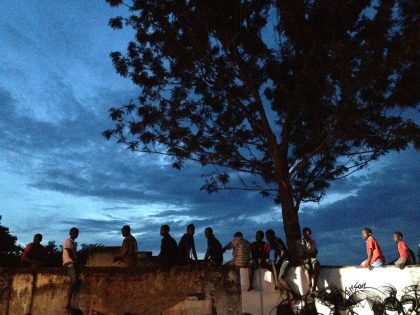