The Irreecha, which takes place at the sacred lake of Arsadi, is an annual ritual celebrated by the Oromo and other peoples at the end of Ethiopia’s rainy season and when blue skies usher in September/October. My book, Locating Politics in Ethiopia’s Irreecha Ritual, explores the country’s politics by making this popular thanksgiving ritual its entry point. The book is about (re)centering “other voices” that hegemonic structures and discourses silence. It is about the unemployed youth, women, elderly and spirit mediums whose take on politics and religion rarely finds an outlet because their meaning-making processes, practices and experiences do not always mobilize conventional vocabularies and venues.

In the book, I situate Irreecha in the context of Ethiopia’s post-1991 socio-political transformations, following the toppling of dictator Mengistu Haile Mariam by the current ruling Ethiopian People’s Revolutionary Democratic Front (EPRDF). The decades under EPRDF’s rule are marked by profound changes in the socio-cultural, economic and political domains.

With the introduction of ethnic federalism, previously marginalized groups of people enjoyed a certain degree of freedom to promote their ethno-religious and cultural heritages. Owing to this momentum, Irreecha became popular and it received attention from various sections of Oromo society. A previously marginalized ritual performance was now endorsed by Oromos across educational, generational, religious, gender and class differences. Soon, it became one of the most defining elements of an Oromo national identity: a highly politicized site where Oromo identity was asserted and celebrated. What was once a local ritual, confined to Bishofu (a town formerly called Debre Zeit) and its surrounding rural areas, expanded to become a national celebration. Besides its (re)positioning in the discourses and narratives of national identity, Irreecha also attracted the attention of politicians of divergent persuasions for “doing politics.”

The post-1991 Ethiopian state under EPRDF, while initially open to the political expression of Oromo and other groups, was soon characterized by increasing authoritarian tendencies leading to dwindling possibilities for open popular political participation. Irreecha came in handy to channel grievances, criticisms, resistance and alternative political propositions against state dictatorship and the lack of freedom. As such, the ritual became a launching ground for Oromo identity and emerged to be central to articulating contemporary political demands.

This reached a climax in the #OromoProtest years of 2014-2016, when the youth openly protested against the then government. The October 2016 Irreecha celebration was notable for the pronouncement of the slogan “down down woyane” (down down TPLF)—a reference to the Tigray People’s Liberation Front, which had evolved into the then dictatorship. Against the backdrop of years of protest, October 2016 was a moment when the Oromo youth (mostly known as Qerroo) openly showed “the will not to be governed” and demanded change at all costs.

The government reacted by by declaring a state of emergency that lasted for a few months. Despite being remembered for the death of hundreds, it is at the same time significant as “a point of rupture” that ushered a transformation that led to the change in the political domain in today’s Ethiopia.

This is the socio-political context in which my book arose. In the course of conducting research for it, I asked: what constitutes politics from the point of view of various stakeholders? In what ways do state politicians and their opponents, (mainly the Oromo Liberation Front) and their respective supporters appropriate Irreecha as a political space to mobilize the populace around their ideologies? How do grassroots politics operate at Hora Arsadi (the sacred lake where the ritual takes place) and what are the mediums through which these politics are articulated? How do political subjects shape how we understand political processes in Ethiopia in particular, and Africa in general?

At the same time I pondered if we can ascribe a singular and coherent meaning to Irreecha. For example, is it really a monolithic spiritual/cultural event/practice/performance? How do the tensions between pan-Oromo (Orommuma) and pan-Ethiopian ideologies play out at Irreecha? Does Irreecha have a history(ies) that speaks to and enables us to understand broader cultural/religious and socio-political processes in today’s Ethiopia? How do we account for archives and voices that hegemonic narratives about Irreecha omit?

As the title suggests, the book is an attempt to find politics elsewhere, as it is practiced by those who are on the margins. The book goes beyond interpreting Irreecha as solely an Oromo ritual and situates it within a wider framework, so as to interrogate the deeper political and religious realities of and practices in the country. By locating Ethiopia’s politics in a ritual most Oromo political elites confine to the limits of Oromo national identity, I tried to situate the Oromo political struggle as well as Irreecha within the wider national context.

Irreecha offers a window into contemporary political issues. I believe the ritual can be used to rethink the meaning of Ethiopia and enrich that meaning by embracing various narratives. Towards this end, it is high time for scholars to pay attention to other vocabularies and ways of articulating politics. In this spirit, I hope the book stirs much-needed conversation and engagement with the meaning of politics, political subjectivities and the production of political spaces other than those of the state, civil society and political parties.

Eyes on the Prize

Does the peace deal between Ethiopia and Eritrea—now rewarded with a Nobel Prize—bring the kind of cooperation between the two countries that it aspired to do a year ago? 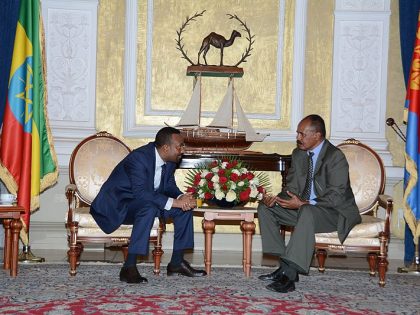 What economic gains are in the peace deal between longstanding foes?