This year marks the 50th anniversary of humans landing on the moon. And while the United States was the first country to achieve this feat, the effort to send people to the moon has taken place all over the world. Zambia’s National Academy of Science, Space Research and Philosophy come to mind. We spoke briefly with director Nuotama Bodomo, who tells this story in her short film “Afronauts” (that you can now view in full online on the occasion of this anniversary), and which will be developed into a feature.

So, tell us a little bit about how you came to this project.

The way I’d answer that is that I came across a video on the internet in 2011. It was an ITN News newsreel of Nkoloso and the Zambian Space Academy, as seen on a British gag show called 50 terrible predictions. So, this British reporter had gone to Zambia to report on the astronaut-training program. And obviously, when you watch the video, they’re just doing weird exercises, doing whatever they can on camera. And so, you’re wondering: Is it a practical joke? Is it real? How much do these people believe? What are their motivations? Who is on this camp? Why did they come here? All these questions come up. And, to me, in a fascinating, exciting way. One thing I’d say is that, as an African-diasporic filmmaker, I’m always searching for African stories that don’t have this burden of proving to non-Africans that we are worthy, proving that we too are smart, progressive, innovative. And this video inherently poked fun at all of that. But I think the thing that really dug into me is the (admittedly exasperated) British reporter ending the segment by saying, “these people are just a bunch of crackpots. And from what I’ve seen today I’m inclined to agree” (which is then compounded by the gag show commentator’s sardonic “so I take it they didn’t get there, then”). That’s the sendoff. And so, I think for me, it was seeing the wonder, and possibility and humor, but also the frustration that it was filtered through this white gaze and delivered through the insidious language of the newsreel, which purports to a “reality.” You could tell there was more than what was being shown. That specific frustration—common to any student of African film—gave a sense of work I had to do (and undo). So, in addition to the story, there was this need to unpack and undo this very specific way of looking at Africans.

But also, I’d like to add another way in which the internet made at least the short version of the film: in 2011, I was in the midst of making a film called Boneshaker. And that movie was so much about yearning for a home you never had. I was very young and filled with existential, diasporic angst. I was very much yearning for images of Africa that were fuller and truer to what I had seen in reality (and this was a time when there was a lot of talk about reinventing the image of Africa). And so, I had gotten into this practice on my Tumblr, of collecting and re-blogging images of Africa, of creating a sort of Africa online for myself. That practice is what led me to the video and that searching—yearning—for alternative visions of Africa is very much embedded in the “Afronauts” short film.

Humans have always looked up at the sky in wonder, but what is the specific allure about the moon?

In a way the moon is unique because it’s a celestial body that is visible. We can even see its shifts with the naked eye. You can look up at the sky and say oh yeah, that’s Venus, or that’s Mars, but you’re maybe just seeing a red dot, and there is just not as much of a connection. With the moon, it’s our ability to see it, but also, the moon is an integral part of our life on Earth, in what it controls and what it shifts in terms of tides and bodies of water, or the lunar cycle in terms of a month, or the fact that many indigenous societies use the lunar calendar. And so, there’s this particularly human connection to the moon.

There’s been a lot of recent efforts at making other planets live-able for humans. What is it like to imagine an African presence on a place like the moon?

Abstractly, I’m very interested in space travel, and very interested in other planets’ environments, and in what we could learn from that exploration. But on the level of making other planets livable for humans, and of colonizing other planets, I’m not optimistic. The simplest way I’ll say it is that it’s currently not governments spearheading this exploration but corporations and privatized enterprise. So, as a black person, I’m not trying to go on Elon Musk’s mission to Mars, because the same oppressive, capitalist systems will for sure be replicated. And I wouldn’t want to be up there without a ticket home. I don’t want to come off as saying Africans shouldn’t go to space but I’m just not optimistic about how it would happen realistically. Also, even though I’ve spent many years embedded in Afrofuturist discourse, I’m pretty earthbound in my thinking. I like being part of an ecosystem, part of a world. I wouldn’t know how to operate in such a strictly built and organized environment, especially one conceived of by a group of wealthy white men. I already have the earthly version of that to contend with.

I think about how stars and planets have been represented in traditional stories or fables and it’s less about them being far away from us and more about them being a part of our existence down here so it seems that goes to the earthbound perspective.

For sure! I’d go back to this thing of a lot of traditional cultures using a lunar calendar and that enabling and informing, say, agriculture or deepening a relationship to the land. I’m very much interested in moon fables but because I am not Zambian, I am being particularly careful about how I speak to that in “Afronauts.”

There’s a feature in the works, anything you’re willing to share?

I’m thinking a lot about the structure and power dynamics of what I’m doing. Given my migratory, diasporic background, I operate in this weird in-between space. I am a Ghanaian (my only citizenship) who currently lives in New York, and has developed this project from the United States. I’ve had to come to terms with the fact that my physical presence brings a shift in perspective and I can’t make this film without writing my body into it. So, for example, even though the movie will be in Bemba and Nyanja, I’ve been quite angsty about the fact that my presence brings English into the project. But I’m also recognizing that my presence—and my English, unfortunately—also highlights the pan-African aspect of the story. Because that was always there. And that was always integral to the Zambian Independence struggle that this film attempts to dramatize. Zambia has been particularly successful at unifying its myriad people (as seen in the popular slogan, “One Zambia, One Nation” and the fact that the first president, Kenneth Kaunda, became a frontrunner in part because his “Nyasalander” heritage was seen to be more objective). People were speaking across border, tribe, and region. Edward Mukuka Nkoloso was a staunch pan-Africanist who, after Independence, headed up the African Liberation Center in Lusaka. We are attempting to build this film in that spirit. So, it’s not this dynamic of I’m a director, I have a vision, I land in your country and I tell my own story, and I’m gone. For me, the best thing about a film of this scale is that it necessitates extensive collaboration. It’s a good thing a film is not created by one person and, though I am a director and I do have a vision, I’m not interested in being an auteur. I’m more interested in making a film rooted in Zambia—in local languages, with majority Zambian actors, and in relationship to current Zambian film production—and bringing a pan-African group of filmmakers, artists, makers, thinkers together in this country with 8 borders and over 72 languages to celebrate and interrogate the life and times of not only one man but also the vast group of freedom fighters who fought for Zambian Independence, but also in dialogue with the 1960s pan-African independence movement. The space program was but one of Nkoloso’s many impossible projects. 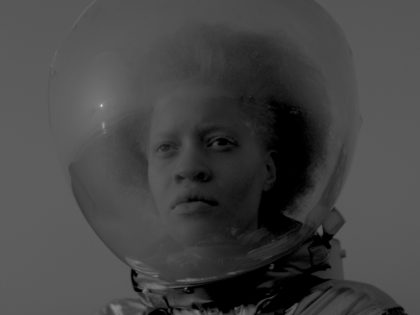 The Afronauts nominated for the Deutsche Börse Photography Prize