Women have undertaken measures to cope and resist against the backdrop of Anglophone—Francophone tensions in Cameroon, a country that is currently embroiled in political crisis, escalating human rights abuses, and on the brink of civil war because of separatist conflict. These tensions date from 1918, when Britain gained control of the smaller, western part of Cameroon, the regions then known as the Northern and Southern Cameroons, and France gained control of the more substantial eastern part, French Cameroun. In 1960, Francophone Cameroon gained independence through a violent struggle and Anglophone Cameroon through a UN vote. Through a process Anglophones have long decried as unjust, the former Southern Cameroons unified with former French Cameroun in 1961, and Anglophones have been politically and economically marginalized ever since, as Piet Konings and ‎Francis Beng Nyamnjoh highlight in their work on Anglophone identity.

Anglophone resistance and state repression intensified in 2016, creating highly militarized settings that subject women to displacement, gender-based violence, loss of loved ones, and other forms of violence as Anglophone men on both sides of the Atlantic protest Anglophone subjugation. Women find themselves in crosshairs, whether they encounter conflict with state security officers or armed Anglophone separatists, and are encouraged to participate in “Ghost Town” protests, or strikes, where Anglophones withdraw from public life, desert the streets, and bring economic activities to an abrupt end.

“I am happily reading the first article [but] our environment is not the best because of gun shot[s],” Annie wrote to the African Feminist Initiative (AFI) listserv. Annie’s congratulations to some of the AFI members who had contributed to a special journal issue on African feminisms in December 2018 were very enthusiastic, yet her depiction of her circumstances were troubling. She explained that she “was writing [from] under [the] bed” in her home in Buea, a large English-speaking town in southwestern Cameroon. Members reached out in solidarity. Amina Mama, who helped found the African gender studies journal Feminist Africa, wrote back:

I was so sadly moved by your account, as a person who remembers hiding under her bed with carnage all around (as a child). I want to note what you said—you are reading African feminist writing, while hiding under your bed and hearing gunshots!

Mama offered words of encouragement: “[P]lease keep your head down—we have every reason to survive, re-group and re-sist the scourge of militarization on our continent.”

Women like Annie and Amina frequently face erasure in narratives about violent (militarized) political movements. As an African feminist, I have been interested in adaptations like theirs, and have explored them as vital strategy to survive and exercise agency in the context of violent conflict. As feminist scholars have pointed out, stories of violent conflict often portray women as passive victims, failing to highlight their agency in unstable settings (e.g., Jill Vickers, 2016).

This report will highlight the experiences of a few Cameroonian feminists, bringing to life the many ways women strive to cope in a turbulent Cameroon, to counteract those portrayals. Highlighting snapshots—moments of agency—of some women’s everyday lived experiences belies representations of women as mostly passive subjects and victims in violent and militarized surroundings.

Debates about the ongoing crisis in Cameroon tend to ignore how women have and continue to navigate the tempestuous political landscape in unique ways, exercising both individual and collective authority. This work will examine how women living in militarized locations in Cameroon survive, resist and exercise agency by, for instance, fighting for gender equality when attempting to create a more hospitable environment for girls and women. As Alicia Decker reminds us in her 2014 work on gender and militarization in Uganda, women “employ various strategies to mediate the violence” they face, rather than being “simply victims.” Amina Mama and Margo Okazawa-Rey similarly remind us in a 2008 issue of Feminist Africa that women engage in “feminist activism against militarism”: “Women all over the African region have not only participated in, survived and resisted violent conflict, but played key roles in facilitating negotiations and peace-brokering efforts.” Thus, this report complements those by AIAC contributors such as Kangsen Feka Wakai, Meredith Terretta, and Melchisedek Chétima, which highlight the various dynamics of the Anglophone crisis by examining how women refuse to be “simply victims.” I might do this by privileging their voices and experiences, peering at freshly developed snapshots of their current lived realities.

As in other African countries, Cameroonian women have long used traditional associations and organized obstructs to gain collective power during political and economic crisis. As Filomina Steady asserts in her work on women’s collective activism and women’s traditional secret societies in Liberia, such societies “serve as mechanisms for the mobilization of women for development and democratization.” In keeping with this heritage, traditional forms of protests have been a feature of women’s protests in today’s Cameroon. In late 2017, for example, Anglophone Cameroonian women mobilized Takumbeng, (or Takembeng), using traditional forms of protest and transnational networks to foster political solidarity, Anglophone inclusion, and nationalist aspirations. Twitter and YouTube videos show that protests took place in both Anglophone Cameroon and abroad in September and November 2017. This rural-based, traditional secret society of women in their sixties and seventies dates to pre-colonial traditions. Because Cameroonians, such as male state security officers, still consider the sight of a vagina in public to be bad luck, the women’s frequent use of naked protests still intimidate and shame. The protests have also innovated by including women of all ages—although only menopausal women disrobe—drawing on the traditional maternal authority of the Takumbeng while increasing their numbers and expanding their powerbase.

However, less traditional women’s organizations have also mobilized in response to the ongoing conflict. As one news report about Cameroonian women’s leadership actions revealed, women’s “near invisibility in the media has not stopped the leadership aspirations of a growing group of female leaders.” For instance, Zoneziwoh Mbondgulo-Wondieh is a Cameroonian feminist activist and has been a leading voice amidst the crisis. Mbondgulo-Wondieh is Executive Director of Women for a Change, Cameroon (Wfac), an organization that works on the empowerment and leadership of women and girls, and their sexual and reproductive health rights. Also, an AFI member, Mbondgulo-Wondieh attested in a recent AFI audio conference that women’s organizations in Cameroon are holding press conferences and reaching out to government officials to describe their pain and suffering due to the current conflict. In a follow-up conversation with me via email, Mbondgulo-Wondieh shared that Wfac collaborates with other organizations such as the South West/North West Women’s Task Force (SNWOT), and that its “peaceful activities” include campaigning on social media and reaching out to “top government officials,” demanding that officials include women (of all ages) in ongoing dialogues about the crisis. Mbondgulo-Wondieh outlined the ultimate goals of many Cameroonian feminist activists:

She sent me the SNWOT Position Statement, which dated from Human Rights Day in December 2018 and urged me to circulate the petition.

Mbondgulo-Wondieh also informs me that on International Women’s Day (March 8), Wfac organized a social media campaign to bring global attention to the plight of women and girls in the conflict in Cameroon. Like many female leaders in today’s Cameroon, she sought to express agency in addressing women’s grievances in political crisis across national borders. Further, Mbondgulo-Wondieh’s actions demonstrates that women are not merely passive victims amid violent political strife. Instead, many women seek to find ways not only to end the crisis, but place women at the forefront of conflict resolution.

But women also act as individuals to bring attention to the ongoing crisis. Monique Kwachou, a Cameroonian feminist journalist and blogger, is a friend of mine. When she announced she would be returning home to an Anglophone town in Cameroon to write her dissertation after defending her PhD proposal at a university in South Africa, I told her how much I feared for her safety, but she was determined. She later penned an emotional blog post in January 2019 about her many answers to the question “how is home?”, highlighting the daily realities for Cameroonians generally and women particularly in Anglophone towns, such as the constant fear of kidnapping and the fact that many young girls cannot attend school. But she also wrote of how everyday women find ways to survive, for themselves, for their daughters. As Monique recounts, mothers who know she is highly formally educated frequently ask her to adopt their daughters, saying, partly in Cameroonian Pidgin English, or Cameroonian Creole: “This my girl is smart eh … she was performing very well in school before this crisis and she has not yet known ‘life,’ abeg [I beg] take her so she can be helping you in the house.” She later shared in a private email that she has been seriously considering fostering a child, most likely, as I concluded, as part of her endeavors to help girls in her community.

One day she sent me a video via WhatsApp of what life outside her window looks like on a “Ghost Town” protest day. The video opens with an image of lush palm trees, their bright green palms fanned out toward the sky. Birds chirped. The sunny scene immediately made me miss my family in Cameroon. Monique’s voice interrupted my reverie, though: “I don’t know what’s happening [in] town, but this is the highway, and there is no car moving. So you can imagine… The Ghost town is being respected; we’re all staying indoors.” She panned the camera to show an empty road, not a car in sight. Just the sound of birds. It’s clear that this road is normally busy, cars honking, music. The 32-second video reflects Monique’s varied multi-layered experiences of today’s Cameroon. Stories like hers, like Annie’s, like Mbondgulo-Wondieh’s, remind us that women in Cameroon continue to employ various strategies to cope, resist, survive no matter the circumstances and, in many ways, go beyond their own individual needs to improve the lives of their female counterparts. Their stories are complex, showing the daily realities of women in Cameroon; Monique wrote pointedly in her blog, “To properly respond to ‘how is Cameroon[?]’ would demand I tell several stories of Cameroonians.” In today’s Cameroon, women cope. Women act. Everyday. 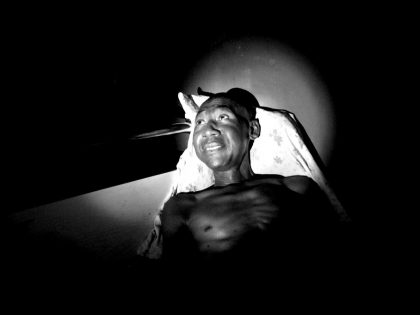