Securing a future and overcoming the eco-cidal logic of capitalism lies in a democratic eco-socialist nation-building project. Such a project has to confront the climate crisis through deep just transitions, grounded in radical non-racialism, mass transformative politics and the reclamation of our sovereignty to sustain life.

The eco-cide question is the question of our time, for present and future generations and for human and non-human life forms. We cannot sustain life on planet Earth, including South Africa, with runaway global warming and worsening ecological crises. This is not about catastrophism, eco-fatalism or end-of-times millenarianism. The doomsday clock is ticking but there is still time to act. A fundamental shift in planetary consciousness is required to deal with and overcome the logic of capitalist eco-cide. Global leadership in multilateral institutions and in national states are not up to this task. Actually they have failed. In this regard, crucial political imperatives have to be advanced and realized, noting that these imperatives are emerging from grassroots mass movements, radical intellectuals, progressive think tanks and activists engaged with the challenge of sustaining life. These imperatives include the following:

Embracing the science of climate change and other ecological crises. Scientific evidence produced by the UN, NASA and the World Meteorological Organization, geologists and Earth scientists are compelling in enabling us to understand the scale, pace and current and prospective impacts of the climate crisis. This has to be the basis for understanding the eco-cide question and has to be made understandable to all in the public sphere.

Planetary eco-cide is about understanding how ecological relations have been racialized, classed, gendered and imbricated in various forms of oppressions. It has been central to supremacist whiteness and is about understanding the political economy of 500 years of destruction of human and non-human life in the making of capitalism’s eco-cidal logic. Genocides, slavery, species extinction, colonialism, industrial-scale violence, Apartheid and human brutalization are central to this history of the origins and making of capitalism. These relations can no longer be reified and ignored as part of capitalism’s ‘endless accumulation’ logic. Moreover, with climate change, there are and will be disproportionate impacts on workers, the poor, indigenous peoples, black lives, women peasant farmers and more generally the poorer and darker nations of the world. Capital’s eco-cidal logic is deeply racist and anti-life, more generally. Confronting planetary eco-cide is also about confronting supremacist whiteness and advancing decolonization as part of radical non-racialism.

Radical non-racialism has to be re-engaged as the basis for renewing and building mass people’s power to confront capitalism’s eco-cidal logic. This means the anti-capitalism, anti-racism and anti-oppression thrusts of radical non-racialism have to be harnessed to unite social forces, build alliances (of workers, the landless, peasants, women’s organizations, the permanently unemployed, radical intellectuals, students and middle classes) and advance movements to sustain life. These movements are already on the march at the frontlines of confronting carbon extractivism, land grabs, protecting the water, seed and forest commons, protesting against nuclear energy, fighting for decent work and more. Such movements are engaged in finding transformative and systemic alternatives to the contradictions of eco-cidal capitalism in local, national, regional and global spheres. The imperative is to bring out the best of humanity, including human consciousness, solidarity and collective endeavor to scale up these alternatives and sustain life in South Africa and beyond.

Deep, just transitions and democratic eco-socialisms are the horizons and visionary concepts of anti-eco-cide politics. The system change logic of systemic alternatives, such as food sovereignty, the solidarity economy, climate jobs, indigenous knowledge systems, rights of nature, socially owned renewable energy, mass renewable energy public transport, zero waste, universal basic income grants, water commoning, democratic planning and more, are about deep just transitions beyond capitalism, from within and outside—about harnessing deep democracy at the household, community, village, town, city and country level to constitute transformative power from below. At the same time, such deep democracy practices assist with reclaiming, re-embedding and transforming the state, so the people can govern. It is about affirming an eco-centric ethics in our relationship with human and non-human life, while meeting human needs. Simply, the democratic eco-socialism project is about ending the capitalist war with nature and affirming human life, black and white, as part of renewing nation building in South Africa. 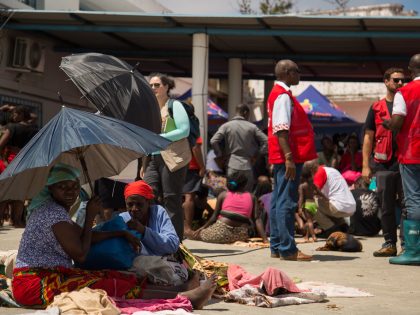 Gutting the public sector serves no one