White Tears, the fifth and latest novel from Hari Kunzru, melds social satire, cultural archeology and the supernatural in an unexpected and clarifying way. It begins by unraveling the tangled friendship between pre-millennial Brooklyn musicians Carter and Seth, then—whirling through the Manhattan fifties, with record collectors Chester Bly and JumpJim—buries itself in the Mississippi twenties. The stakes rise as Seth, the narrator, shifts his attention from Carter to Charlie Shaw, a brilliant, forgotten bluesman.

Most reviews focus on the excavatory work of the novel. “Masterly… writing about early American blues,” writes novelist Rachel Kushner. Slate: “…into the shadowy heart of the matter, to the poisoned center of America’s past.” The Los Angeles Review of Books notes the focus on the “prewar African-American artist” and the similarity between famed collector Jim McKune and the character of Chester Bly.

Yet, even as the story sinks deeper into the old South, it evokes, with greater intensity, contemporary Brooklyn. Bly conjures Frank “VoodooFunk” Gossner, who spent a decade acquiring rare West African vinyl for re-issue on boutique Brooklyn labels. And Carter’s family—the Wallaces, rich from Southern prison labor—resemble the real-life Bronfmans, bootleggers who became conservative liquor magnates, and whose youngest members, Benjamin and Hannah, have embedded themselves in Brooklyn subculture.

Carter’s career trajectory and general worldview, though, hew closest to Diplo, the producer-celebrity who began in Philadelphia and Williamsburg loft parties. More subtly, Brooklyn-born rapper The Notorious B.I.G. (or Biggie Smalls), murdered at 24, hovers over the pages, especially over the character of Charlie Shaw.

In the familiar yet alternate world of White Tears, white privilege is unstable, and racial profiteers must account for their misdeeds. The ghost of Shaw seeks justice, and Carter’s family will pay. This fictional present, when juxtaposed against our own, throws new light on the tangle of American economies—music, real-estate, prisons—that continue to make meaning, and money, on black erasure.

In 2009, Major Lazer, an unknown band with a “Rasta commando” logo, released “Pon Di Floor,” an electro-dancehall track with kazoo sounds and stuttering drums. The raunchy, trippy video became popular online, but gave no indication of who Major Lazer actually was. Eventually fans learned: the black performers—dancer Skerrit Bwoy; singer Vybz Kartel; keyboardist Afrojack—were not in the band. The two true members, Diplo and DJ Switch (absent from video and artwork) were both white. Diplo invented the commando character with designer Ferry Guow.

Critics balked. “Boys travel to Jamaica, boys record with locals and make less convincing songs than the locals make on their own,” wrote the New York Times. A PulseRadio.net blog read:

Major Lazer is a ‘Jamaican commando who lost his arm in the secret Zombie War of 1984,’ now turned ‘renegade soldier for a rogue government operating in secrecy underneath the watch of M5 and the CIA’… Can’t make this shit up.

Industry figures, however, felt different. “When Major Lazer released their first album and I made the connection that it was half-Diplo, I knew I had landed on something magical,” wrote Alexander Wang. A 2010 Blackberry commercial brought Diplo centerstage, and soon after, his photo essays of Brazil and Trinidad appear in Vanity Fair. Images of him shirtless, cliff-jumping in Ibiza, mud-bathing in Israel, and in-studio with Jamaican producer Lee Perry congeal into a book. He begins producing for pop superstars Beyonce and Usher.

Eventually even Justin Bieber, the white R&B singer and teen-internet superstar, approaches Diplo and keyboardist Ariel to brainstorm. “Ariel’s more anxious than me to do whatever it takes to make the Bieber record,” he tells reporters.

A 2011 essay by Boima Tucker critiques Diplo’s philosophy and practices. The Vanity Fair photos, he says, look “a lot like someone looking for redemption in a pure, untouched, uncontaminated, Other.” Diplo is undeterred. In 2013 he makes Forbes’ list of wealthiest deejays.

In White Tears, blond, dreadlocked—often shirtless—Carter attends school in upstate New York. His Mississippi family, rich from prison labor, has grown wealthier from private prisons. With family money, he hikes Nepal, and drives “a bus across the Skeleton Coast in Namibia looking for surf.”

Ideology guides his taste. Black music is more “authentic than anything made by white people.” His views infect classmate Seth: “Carter taught me to worship—it’s not too strong a word—what he worshipped.” Together they “reproduce effects heard on Lee Perry’s Black Ark studio.”

For Carter, Brooklyn is another beach to explore. After graduation, he deejays “in basement bars, on midtown rooftops, in Bushwick warehouses,” spinning “regional flavors of bass and juke music. Chicago, London, Lagos, Miami.”

In a Williamsburg studio they manufacture authenticity. “We blew up their harmonies into towering melodrama, sprayed on the fuzz. It sold out in a week.” When a white rapper with “James Brown dance moves” wants to collaborate, however, Carter expresses little interest. “We’re doing a favor even talking to him,” Carter tells Seth.

Instead, Carter uploads a file of a street singer that Seth recorded. He adds a “scuffed and faded” label with the “made-up” name Charlie Shaw. “Who knows the tradition? We do! We own that shit!” he says.

Biggie’s deep, breathy voice and storytelling gifts brought him early attention: Pusha T once called him a “master painter with words.” The bricolage of Biggie material—inspiring, bawdy, violent—arose from his Bedford-Stuyvesant childhood. His mother was a schoolteacher; yet nearby, at the Albee Square Mall, rap stars like Eric B & Rakim hung out with neighborhood men like Killer Ben.

On March 9th, 1997, in Los Angeles, Biggie was killed in a drive-by. His album, Life After Death, came just two weeks later. It became the third best-selling rap album ever. Subsequent albums (of unreleased material) sold millions. Yet, before he died, Biggie, strapped for cash, sold half his publishing rights to his label boss.

Over the last two decades, real-estate developers have, as they remade Bedford-Stuyvesant, also remade Biggie’s image. A mural of him in a beret with his (most upbeat) lyric, spread love it’s the Brooklyn way, now adorns a renovated Fulton Street building. The 2011 unveiling coincided with the opening of the nearby billion-dollar Barclay’s Center.

In an 2015 essay on the architectural, spiritual history of Brooklyn, Kunzru notes the new, symbolic Biggie:

A mural of his jowly face looks down on Fulton Street. Worshippers (it’s really not too strong a term) make pilgrimages to the apartment building on Saint James Place where he grew up. They take photos outside his front door. They film rap videos. On his birthday they leave flowers and pour libations of Hennessy cognac on the ground. 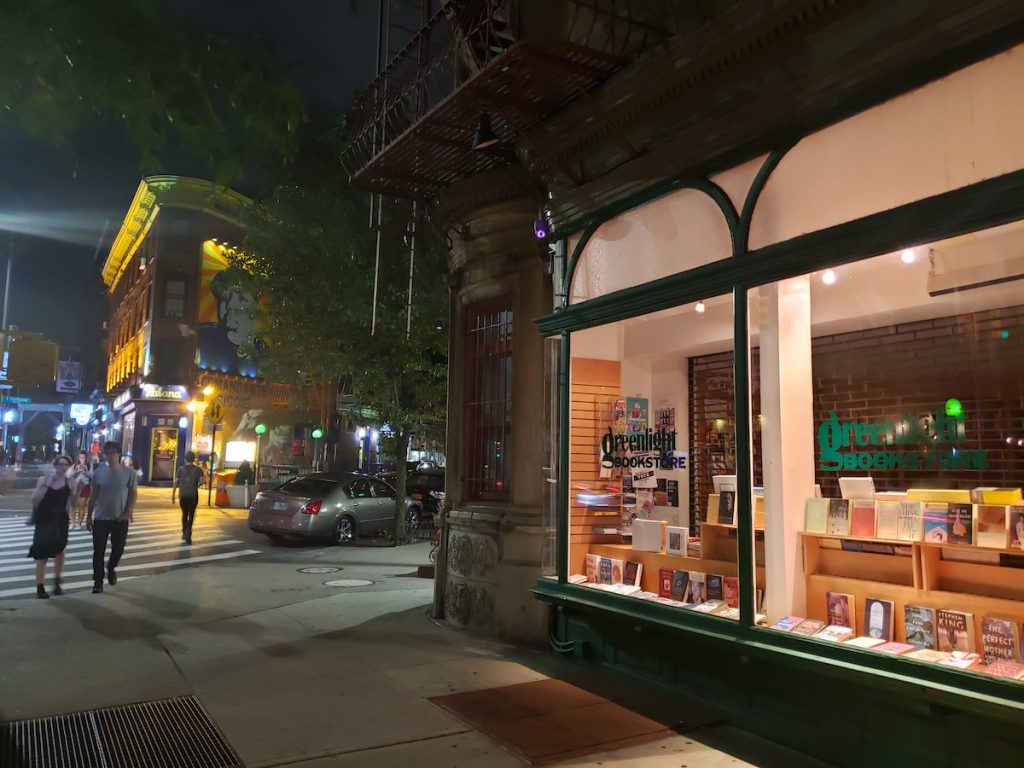 The Fort Greene bookstore where White Tears was launched. Image via author.

White Tears moves between parallel versions of Shaw’s life. In one, a single copy of Shaw’s record survives. In another, Shaw, murdered in prison at 27, never records. Either way, the value of his vocals exceed that of his life; death increases their value. In 1929 a producer offers ten dollars. “Not twenty-five, but enough,” Shaw says. Decades later, Bly offers one hundred dollars for Shaw vinyl. Online, it’s five thousand.

Seth travels to Jackson, Mississippi, seeking Shaw’s ghost near where he may have recorded. An Edwards Hotel hosted real blues sessions: in the book it appears as the Saint James. As Seth photographs dilapidated Jackson, a turbaned woman accosts him. “We’re fascinating to you, as long as we’re safely dead,” she says. Like Charlie Shaw, she appears in two places at once: she speaks to Seth, near the Saint James Hotel, and to Biggie-pilgrims, near Saint James Place.

The long shadow of Biggie also falls, unexpectedly, on Carter. The name-choice “Carter Wallace,” amalgamates the surnames of Biggie (Christopher Wallace) and his protege, Jay-Z (Sean Carter), forcing old plantation entanglements to the fore; narrowing the distance between a Bed-Stuy street guy and a Southern scion. The attacks on Carter and Biggie mirror each other (each at a red light); as do their memorials.

“What was a young music producer with a glittering career doing at 3am in the industrial wastelands of Hunts Point?” reads a headline in the novel after Carter’s beating. Biggie, however, was seen as responsible for his own murder. The New York Times, March 10th, 1997:

In Bedford-Stuyvesant, where Mr. Wallace and his friends once dealt drugs out of a garbage can in front of a fried-chicken place on Fulton Street, his neighborhood friends and fans did not seem surprised that Mr. Wallace had died in a hail of bullets.

“Smalls’ death may in some way be payback,” reported a young Anderson Cooper at the time.

White Tears refers, on one level, to white self-pity. [Slate called it a “Twitter-ish jeer”]. Yet if the struggle between Shaw and Seth analogizes the larger fact of blackness pulsing under the skin of White America, then Seth’s fragility, the shredding of his racial solidity—and the attack on Carter—offer an alternate interpretation.

“The real problem isn’t too many westerners going to Africa to buy up old records,” collector Frank Gossner said in 2012. The problem? “Most African countries there are run by thugs.” The New Yorker recently asked Diplo about cultural appropriation: “It’s complicated, but I don’t fucking care.” Together, Gossner and Diplo represent a kind of hermetically-sealed whiteness, inured to criticism, authenticated by black symbols but with little room for black autonomy. White Tears punctures this cocoon, exposing its ahistorical substance and the controlling impulses of those who live within it.

It also makes visible the violent reduction of black artists to symbols. As Bedford-Stuyvesant is destroyed and remade, images of Biggie, the conscripted patron-saint-of-gentrification, proliferate. The ghost of Charlie Shaw kicks out against this spiritual servitude.

The novel was—appropriately—launched at a Fort Greene bookstore across from the Spread Love building. [“Even the humblest of intersections is a crossroads, and possesses that ancient symbolic power,” Kunzru wrote, in his Brooklyn essay.] That the March 14th, 2017 event fell between the twentieth anniversaries of Biggie’s death (March 9th) and the release of Life After Death (March 27th), however, feels more mysterious.

A mile from Spread Love, on Vanderbilt and Myrtle, a lesser-known mural lives. “BEN,” in terraced, metallic letters, with birth-and-death dates, accompanies the painting of a bright-faced young man with a square jaw and sharp hairline. This marks the short life of Benjamin “Killer Ben” O’Garro. Biggie would have heard of Ben; a popular 1991 song mentions him by name. In 1995, according to former detective and author Derrick Parker, they may have even clashed, months before Ben was murdered.

In July of 2015, Ben’s mural was defaced; his eyes and life-dates sprayed with white paint. For veterans familiar with the old blood-feuds, it was a disrespect, a defiling.

Can we imagine it differently?

A Brooklyn warrior dies in battle. His ghost, trapped inside a wall, continues to watch over his village. One summer day, after many years, the warrior blinks out onto the street. He recognizes no one; no one recognizes him. 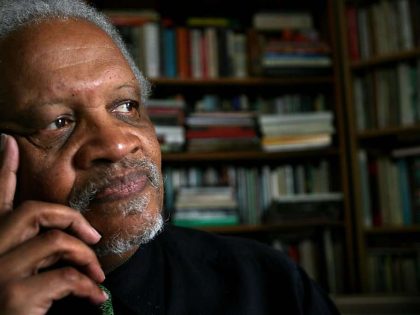 Ishmael Reed explores the future of race in America in new work, focusing in on black-South Asian solidarities. 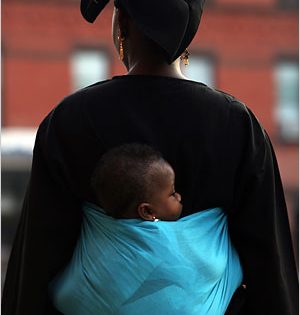 Excerpt from Sharifa Rhodes Pitts‘ memoir of the black metropolis, “Harlem is Nowhere,” which came out this week in the UK: