The Poets Cafe, located, since the Seventies, in the Lower East Side, is an appropriate venue for Reed’s irreverent and penetrating works on race. The Cafe has resisted the flood of private capital and cultural dilution which have transformed the surrounding blocks into an archipelago of open-air brunch spots. It has done so with a fidelity to its original vision as a home for marginalized voices, even as New York squeezes out its Puerto Rican and African-American populations.

Life Among The Aryans, set in the near future in the southern town of Whoop-And-Holler, unfolds after the Presidency of P.P. Spanky, a reactionary reality-show host. A Jewish progressive has since been elected, and the new President announces reparations payments for all African-Americans. This outrages John Shaw, an unemployed White Supremacist (played by Frank Martin), but his ragtag outfit struggles to come up with a coherent response. First, his mentor, Leader Matthew (played by Timothy Mullins) skips town with the funds for the revolution. Then, his wife, Stella (played by Lisa Pakulski), and her friend Barbara (played by Jennifer Glassgow), undergo an experimental transracial procedure to become Black. They collect reparation monies and vacation overseas. Eventually Shaw must reconcile his racial fantasies with his isolated reality.

Reversals fill the play. John Shaw, who dreams of overthrowing the “Zionist-occupied government,” is Jewish. And when Doris Johnson, an African-American laborer played by Malika Iman, files for her reparations check, she is turned away. She doesn’t have the right documents.

Another twist is that the racist White Lightning Network has a South Asian anchor. The role is small—the anchor, played by Monisha Shiva, appears three times—but her narrative frames the play. She conveys, through her physical composure and exaggerated facial expressions, an intensity, that, exceeding that of the propagandist, enters the realm of the true-believer.

In his new novel, Conjugating Hindi (Dalkey Archive Press, 2018), Reed continues to explore the phenomena of South Asians on the Far-Right. The story centers around a series of debates between Professor Peter “Boa” Bowman, an African-American Professor of English at Woodrow Wilson Community College, and Shashi Paramara, a “right-wing intellectual” and Christian-Indian who makes propaganda films. [Paramara is recognizable as a send-up of filmmaker and writer Dinesh D’Souza.]

Parama and Bowman first debate the merits of chattel slavery for conservative crowds. Bowman plays the side-man. Then an international row breaks out when Siraj ud-Daulah, the firecracker Indian Prime Minister, presses Britain on allegations that Lord Mountbatten, former Viceroy of India, sexually abused Indian children in the 1940s. Global trade suffers; rumors of a looming war bloom. Indians begin to be hunted in America after the media blames India for a plane crash. At a debate, several Whites “pummel” Parama. Bowman tries to protect him but is thrown to the floor.

“The Fugitive Indian Law was being debated in Congress,” Bowman says. Indians hide out in Arab shops wearing “I am not an Indian” shirts. Paramara tries to pass as Black to move through Oakland. He shows up at Bowman’s house, asking to be hidden. “Shashi was doing a bad imitation of a hip-hop walk like the kind he’d seen on MTV.” Bowman takes him in.

Bowman, an expert on the intellectual dispute between Monroe Trotter and Booker T. Washington, has been studying Hindi and reading Indian history. When, in his basement, he tries to get to the root of Paramara’s Eurocentricity, a second set of debates begin.

Bowman: “Take Vyasa’s Mahabharata and Valmiki Muni’s Ramayana, works that were written in the eighth and twelfth centuries. Hundreds of years before Shakespeare.”

Paramara: “Two long boring video games on paper all about royals engaged in endless warfare… Plots that appeal to children without the sophisticated and complex plots in a play by Shakespeare or Marlowe… Just adds to the screed of superstitions that are crippling the Indian consciousness.”

Bowman: “Superstitions? Witches and sorcerers and soothsayers appear in Shakespeare. Hardly are his texts based on reason or enlightenment. There are enough ghosts in Shakespeare’s plays to organize their own acting company. Moreover, Shakespeare, a country boy, probably subscribed to these superstitions.”

Bowman zeroes in on the Krishna figure, whose blue skin signifies a dark color. “That’s why your precious Lord Krishna is blacker than me. He’s a soul brother,” he says. Krishna, whose mythology involves seduction, reappears later as the patron-saint of Bowman and Paramara’s mystical, sexual adventures.

Feminist academics come out better here than in Reed’s previous work. In particular, Kala, the dark-skinned, Hindi-speaking sister of Shashi Paramara, attracts Bowman’s attention. They become friends, and he imagines their ongoing relationship. “They would have lengthy discussions as she explained Postcolonial theory to him. Or why India shouldn’t move away from the Devanagri script.” He hopes she can find him a discount price for a trip to India.

Oakland, too, emerges as a character, as White gentrifiers (who Reed calls “Ubers,” “Digitalites,” and “Streamers”) conspire to push people out using technology, dogs, and police. Reed excoriates the South Asian tech bros who collaborate with them: “NextDoor.com, which was founded by the son of Indian immigrants, Nirav Tolia, was being used by the techie invaders to spy on Blacks, some of whom have lived in Oakland for decades.”

Reed is easier on Paramara, as he and Bowman slowly eke out a friendship: “Even though they had fierce debates, he’d grown fond of Shashi.” Little by little, Bowman’s housing and protecting Paramara emerges as the central metaphor in the story.

The novel falters momentarily, however, when Bowman, in his research, conflates South Asian colorism, racism and caste: “For these Brahmins, fake and otherwise, Blacks are Dalits. Untouchables.” In India, a country of 1.4 billion (the population of Uttar Pradesh state exceeds that of Nigeria), one finds multitudes of dark-skinned Brahmins, light-skinned Dalits, and all permutations in between. [For the last two decades, light-skinned Kashmiri students have been catching hell; soldiers from other regions, who find Kashmiris easy to identify, have begun firing shotguns indiscriminately into crowds.]

And yet Bowman, contemplating these issues from America, has a point. When the Hart-Celler Act of 1965 lifted immigrant quotas for India, it benefited those with access to infrastructural and financial support, i.e. those from the upper reaches of a highly stratified society. One leading Sri Lankan-American artist said that caste, though verbally downplayed, often revealed itself in “associating with Whiteness, while distancing from Blackness.” Earlier encounters between South Asians and Africans in the United States, however, had a somewhat different tenor.

Lal Lajpat Rai, independence leader (and mentor to Gandhi) visited America in 1907. He met with leading Black intellectuals at Tuskegee University, and published excerpts of W.E.B. DuBois. Vivek Bald has shown that Black and Puerto Rican neighborhoods like Harlem and Black Bottom absorbed South Asian ship workers and traveling merchants by the hundreds. [Rozonda “Chili” Thomas from the super-group TLC is descended from Moksad Ali, a Bengali who settled in New Orleans in 1883. Her uncle, Badu Ali, discovered Ella Fitzgerald.] According to Vijay Prashad, Huckeswar G. Mudgal, the foreign affairs editor of the Negro World Magazine (published by Marcus Garvey’s United Negro International Association) was born in India. In Black Crescent: The Experience and Legacy of African Muslims in the Americas, Michael Gomez claims W.D. Fard Muhammad was a New Zealander of Pakistani extraction. Fard ministered to Blacks in Detroit; Elijah Muhammad was his student. There are many other such examples.

Conjugating Hindi then, addresses, in a time of mono-narratives, historical amnesia, and a denuded media, the question of solidarity amongst non-Whites in America. It lives in the new, tense space between the international labor demands of Silicon Valley, rising xenophobia and nativism, and America’s schizophrenic approach to its racial past; where the Chief Executive of Microsoft, Satya Nadellin, an Indian-American, can issue a memo defending a logistics contract with Immigration and Customs Enforcement (ICE), at the same moment that ICE separates 70 South Asian asylum-seeking families at Sheridan Prison in Oregon.

“You should write a handbook for second-generation intellectuals whose parents migrated from the Indian subcontinent about how to deal with White Americans,” Paramara says.

Back at the Nuyorican, a bright-eyed young volunteer offered me some banana pudding before the show. “How did you find out about this?” She asked. I showed her my copy of Conjugating Hindi, and told her Reed had been first published by Langston Hughes. “I’m more excited to see the show after what you’ve told me,” she said. She hadn’t heard of him before.

Many younger readers are unfamiliar with Reed’s work. The literary establishment, with whom he has clashed, might prefer it that way. Many have not forgiven him for his vocal objections to the movie adaptation of The Color Purple by Alice Walker (directed by Steven Spielberg), and, more recently, his disassembling of the movie Precious, based on Push, by Sapphire (directed by Lee Daniels).

And he continues to breathe fire. Here Bowman explains to Paramara his problem with the New York literati: “That’s the same reason they’re pushing these African writers. They’re being brought in as cultural reinforcements by these wannabe colonialists. Their role is to undermine the Black vernacular, a language of uprising, and Britishfy the Black writing scene.”

The flap copy refers to Conjugating Hindi as Reed’s “global novel,” a new form, which “crosses all borders.” At least twenty sentences written completely in Hindi appear in the manuscript. After five decades, Reed, with his deep understanding of American Media, an encyclopedic knowledge of American Letters, and a persistent curiosity, continues to produce innovative, satirical, caustic material. While Reed often writes with the (in his words) “wrath of an Old Testament God,” ethical concerns sit at the core of his work; Reed, even while clowning his characters, sketches out the terms by which people can learn from one another, without erasure. 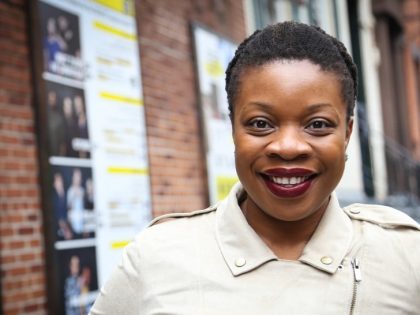 Is there such a category as a Biafran immigrant?

The New York Theatre Workshop recently staged a successful run of two plays, “Sojourners” and “Her Portmanteau,” which are two parts in a cycle of nine installments in the “Ufot Family Cycle,” by Nigerian-American storyteller Mfoniso Udofia. … 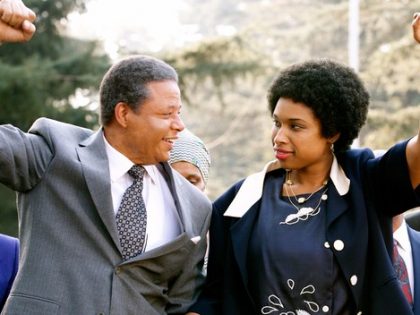 No wonder Winnie Mandela objected to this

Remember when Darrell Roodt’s “Winnie” first premiered in 2011 at Toronto Film Festival, and tanked? At the time Winnie Mandela herself declared that she didn’t like the film (unfortunately you have to watch Nadia Bilchik deliver this …