“We are neither a theory nor a movement. We are open space: Africa’s newest genre. We are the unemployables, dissidents, techies, pan-Africanists, designers, etc. coming out in the 21st century, in our different corners, to challenge the centuries’-old notion that Africa does little thinking, trades badly and is even worse at buying… Afro-Moderns know how badly their stupid forefathers performed in the past and are now refusing to mourn it.” – Pwaagulongii Dauod, winner of the Gerald Kraak Prize 2018

Africa’s Big Men have always been good at talking. My whole life Big Men in politics have talked and talked and eaten and eaten. When I was born they were talking. Back then the ones who talked the most were bestowed with the names Mobutu and Houphet-Boigny and Banda and Moi. They stayed and stayed in power, occupying office, taking up space. They were still there even as I grew up and reached the age of twenty. The Big Men cut ribbons and opened clinics and celebrated roads that would quickly melt in the sun, until finally they had to be dragged off by protesters who had grown too tired and angry to stay quiet the way good citizens were supposed to.

Today, in my fourth decade, I watch the same old shiny motorcades filled with Big Men—the politicians and the newly rich Big Men who used to hold office but instead have captured markets. Now the old Big Men are dead but there is Kabila the Second, the son of Kabila the First. As though Congo is a monarchy and not a democratic republic. Today, Museveni and also Kagame still do not want to move. Now there are wealthy men—the ones who own private jets and drive four-by-fours. They are a slightly different breed but they are Big Men nonetheless; with the mannerisms and prejudices of Big Men. They like their women “just so.”

There are other kinds of men in Africa too. Big Men who know when to leave: Look at Ghana, our shining Black Stars. Look at Botswana and even Zambia with its stuttering democratic process.

I know … There are also ordinary men. The ones whose hearts break when their lovers leave them. The ones who walk to work. The ones who bring sweets home for their children. Some of them are good, but they are not Big Men and so their goodness is inconsequential.

The pride I once had—the pride of a naïve African girl who believed in kings and queens and the beauty of the past—has shriveled. Ha! I am a bitter woman. Every political leader I ever respected, stayed too long and broke too much or was simply too inert—too compromised to be taken seriously. So that by the time the last century was ending, I looked upon them all with a sense of fury and shame. Mandela does not count. He had twenty-seven years to burnish his skin with something no one is allowed to touch. The rest are something else. The misery they heaped on top of the misery colonialism left, has me ill and tired.

I have no nostalgic feeling for Africa Day, though I love Africa for reasons to do with history and oppression and ingenuity, even as I know it makes no sense to indulge in this strange kind of nostalgic solidarity. Perhaps knowing this, you will forgive my skepticism about African leaders and my cynicism about the day they have designated for us which we now stretch into a month. I believe in African people even as I have no patience for the Big Men who rule Africa. I do not however, believe Africa Day, or month or whatever, has any value.

My whole life, Africa Day has merely provided an excuse for Big Men to talk about the things Big Men like to talk about on days when they feed crowds and give speeches. They do this without irony or shame. The applause soothes their egos. I wonder what it does to their consciences.

Their shamelessness has angered me too much and so I have turned my face away from Africa Day. I have done the same with many other days. Women’s Day. Youth Day. These are not days for celebration. They are days when our betrayals should be catalogued. They are days that ought to shame those who know how little they have done.

The Organization of Africa Unity was—like so many of the ideas of the Big Men—a field of dreams that went uncultivated. It made small wins and nurtured symbolic acts and as a consequence, it made little progress. Today, the African Union continues in the same way—tilling fallow land; ignoring areas that are fertile and over-investing in all that is barren.

Africans are moving fast. We are brilliant but the Big Men of Africa are not. With their unions and their non-existent trading zones, they slow us down and take us backwards. They bury us in paperwork and stamp out our excellence with their rules and hierarchies.

The freedom and forward momentum African people have been able to achieve are a function of our own efforts. After independence the Big Men simply held their annual meetings and talked too much with their excessive deliberations and their long stays in large hotels where their delegations grazed on hors d’oeuvres while on the hunt for the flesh of girls and women whom they hoped would not put up a fight.

In rejecting Africa Day as a special day, I have accepted that Africa is not the place Big Men have told us it is. And so my dismissal is not cynical. My refusal to be told when to clap and when to smile and when to open my mouth to eat and when to dance in the blazing sun and how to wrap my wrapper beautifully so that the face of the Big Man who adorns it spreads lovingly across my backside—all of this is a beautiful and considered resistance.

They are afraid because growth and change and love are frightening and exciting. Big Men quake in the face of all that is new and kind and full of a strange kind of love they cannot comprehend. They prefer order and stability and they live in the version of history they wrote. That version is now obsolete. The Big Men who created Africa Day in their own image in 1963, said they loved us but then they betrayed us and so we—their bastard children—have no need to respect the day they made.

I respect freedom and I respect the future and so I respect the moment in which we live today—if only because it is in this moment, this today—that I find myself free of the adulation of the Big Men of yesterday. I scorn the Big Men and I adore the small people. I hold them up—the women and the men and those who are neither and both; the unemployables, the dissidents. They will show us the future by walking towards it; by refusing to make grand statements. They will not decree days of waste and needless celebration. They will lead the way simply by refusing to be Big Men. 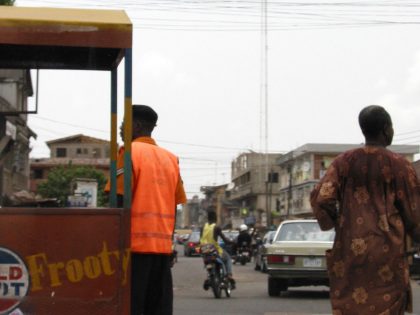