Obinna Ukwuani, the MIT graduate and self-described “education entrepreneur” wasn’t born in Nigeria, but claims a close connection to the country of his parents. The founder of Exposure Robotics Academy (ERA), a competitive robotics camp that he ran in Lagos during his summer breaks from MIT, Ukwuani caught the attention of the young filmmaker Arthur Musah. Hailing from Ghana and Ukraine and himself an MIT graduate, Musah is committed to documenting understudied aspects of the Afro-diasporic experience, particularly the efforts of Ukwuani and others to promote STEM fields (science, technology, engineering, and mathematics) in Nigeria. Musah’s documentary Naija Beta was born of an eagerness to better understand the conditions under which African MIT students learn, labor, and dream of “giving back” to the continent to which they are (however ambivalently) tethered.

The film’s opening sequences feature Musah’s eloquent, introspective voice-over narration, which the director uses to communicate not merely his own biography, but also his sheer curiosity about Ukwuani. “Here,” he says of his subject, “was this young guy who called himself Nigerian, even though he was born in America’s capitol, and even before he was done with college, he was headed to Lagos with his team to bring technological education to 35 high school students in Nigeria.”

Sensing that Ukwuani’s aims exceeded the familiar dimensions of tech-centered philanthropy, Musah felt “compelled to follow” the young man and his team “all the way to Lagos.” The credit sequence that follows this confession strongly suggests a Nollywood film, but with a key difference: offering a montage of images of the big city – of notorious traffic jams (or “go-slows,” to employ the parlance of Nigeria), tall buildings, and crowded marketplaces – Musah eventually trains his eye on educational sites like the National Open University of Nigeria (the first federally funded distance-learning center in West Africa) and, finally, the Grange School, a private day and boarding school in Ikeja, close to the airport and flanked by country clubs.

Regrettably, Naija Beta does not provide much contextualizing information about the Grange School, or about the students who are admitted to Ukwuani’s (apparently highly selective) robotics academy. Describing the academy as the product of a certain “back to Nigeria” movement among MIT students – and more specifically as an effort to encourage young Nigerians “to be passionate about technology” – Ukwuani serves as his own spokesman in Musah’s film, periodically informing the camera of his ambitions. Joining him on this techno-evangelist mission are other MIT students interested in spreading the gospel of robotics, among them the energetic Tobi, a young woman whose parents are from Ogun State. Musah shows her teaching a class, her tone as much inspirational as admonitory, enjoining students to do their best while warning them about the perils of unoriginality.

At its best, Naija Beta captures the near-comic disappointment of students who discover that “Miss Tobi” is requiring them to prepare for all conceivable contingencies, and Musah is particularly alert to the code-switching shared by students and teachers alike (particularly memorable are the MIT students who address the camera in standard, American-accented English, only to offer a few Pidgin words and phrases in casual conversations with the kids), as well as to the bitter doubts with which everyone seems to regard Nigeria. One of the ERA students carefully and candidly outlines her plan to contribute to Nigeria’s “brain drain,” saying, “I want to achieve my personal goals, become an engineer or a doctor. Instead of staying here and saying, ‘I want to improve my country,’ I will go and improve myself.” Dismissing those who advocate remaining in Nigeria, she continues, “Secondary school is the only thing holding me back here. In my own case, it’s not like I have a choice. Once I’m done with secondary school, I’m running away. And I can’t guarantee I’ll come back to Nigeria.” Her sobering thoughts on the futility of Nigerian politics and the impoverishment of Nigerian activism stand in stark contrast to the cautious optimism espoused by Ukwuani and his associates, all of them apparently aware of their enormous privilege as MIT students.

But Naija Beta barely suggests the socioeconomic status of the ERA students themselves, begging the question of how, exactly – under what criteria – they were selected for the program. At one point, Musah shows them swimming in a pool on the palm-tree-lined grounds of the Grange School, their exultant freedom counterpoised with the apparent indigence of a pair of candy sellers forced to sit on the dirt just beyond the institution’s fences.

If Musah seems to sidestep the question of the students’ relative privilege (and of what appears to be their corporate sponsorship by Shell Oil), he certainly, if only occasionally, zeroes in on the experiences of those on the periphery of Ukwuani’s robotics school, interviewing security officers, day laborers, and several others, all of whom discuss the failings of the Nigerian state (as one man says with heroic bluntness, “The Nigerian government cannot help you”). Back at ERA, the students are instructed in how best to prepare for the SAT – “so they can obtain a great education” in the United States.

“The students that we recruit tend to be the best anyway,” one instructor says, confident in their capacity to “ace” the SAT. One student is caught cheating, however, leading to much handwringing. At one point, Ukwuani wonders if his academy will in fact “raise false hopes,” although he concedes that the students seem to understand that “Nigeria’s challenges are larger than they are.” But he concludes his musings by saying, “The life of a leader is not meant to be easy – it’s fraught with a lot of emotional, psychological, structural challenges that a lot of people may never have to face.” He remains convinced that ERA students, “the best of the best, will be perpetually dissatisfied with what Nigeria has to offer.”

Perhaps the best that can be said for Naija Beta is that it reveals some of the tensions between young Nigerians eager to flee their country for a better life in the United States and the men and women of color who, in fact, made it all the way to MIT, only to become disillusioned by its perceived superiority. One ERA instructor, for instance, laments the competitiveness of Nigerian culture that contrasts with the smooth cooperativeness of life at MIT, seemingly embodying some of what Fanon critiqued about the “colonized mind.” That the MIT students look upon Nigeria with pity and terror is reinforced in a scene in which Ukwuani, listening to NPR in his car (and far from any aggravating “go-slow”), hears about the kidnapping of the Chibok schoolgirls, and then about a suicide bomber who targeted a secondary school.

But the film ends on an encouraging note, as one MIT student, referring to Nigeria, tells the camera, “I am not embarrassed to say that I love my country. I have never been so patriotic in my life.” When Nigeria won the Africa Cup of Nations, she tried to sing along to the Nigerian national anthem, quickly realizing that she didn’t know the words, but resolving to work harder to honor her African roots. “I need to learn that,” she says with a smile. 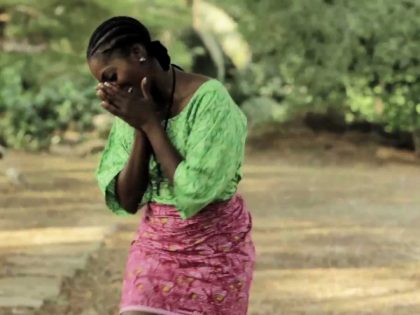 Our love is hot for Tiwa Savage

The music video for Tiwa Savage’s “Ife wa Gbona” is as engrossing as the song. With its blend of pop, juju and highlife It bring up warm feelings in the listener.