Stellenbosch has been a crucial part of the decolonization drama that swept South Africa in 2015. The past year has highlighted how this town in the Western Cape struggles with the contradictions of its selective historical amnesia. Stellenbosch persists in allegorizing itself as a banal blend of pastoral and techno-futuristic progress, at the heart of which lies a university whose ivory tower is stained by its past incubation of Apartheid’s grand designers and its present parochial protection of white Afrikaans culture.

But while one narrative of the town’s history is proudly made visible via Cape Dutch buildings and old vineyards, there is an insidious will to forget the inconvenient meanings Stellenbosch has had historically. Nobody here wants to say too much about how the university incubated racists, or how the spatial politics of the town bear the very visible marks of forced removal and unjust dispossession. Beneath the narcotizing whitewashed farmers markets and the cack-handed gestures towards placing itself in the present, a deeper and more richly sedimented history lies buried.

This sediment is so deeply buried that it only seeps out when pressure is applied. 2015 was the year that political activism shook Stellenbosch’s windows and rattled its doors. Amid the wider seismic jolts experienced around South Africa, as the Rhodes Must Fall movement and other coterminous groups brought to the nation’s attention how many of our public spaces are decorated by problematic memorializations, Stellenbosch was not spared. 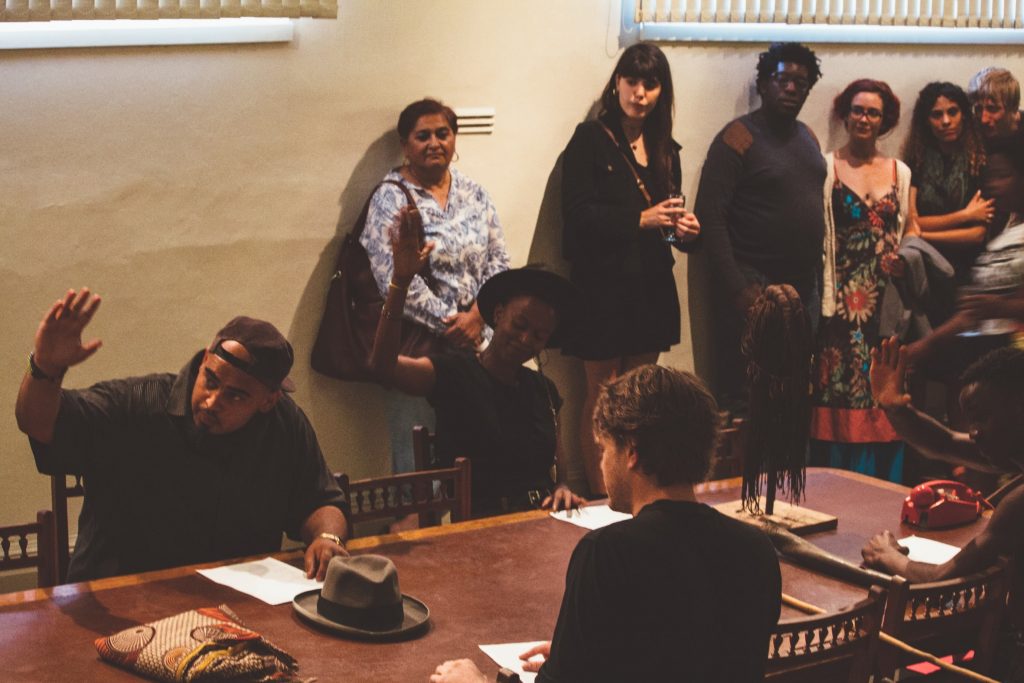 Indeed, Stellenbosch’s bewilderingly phantasmal position in the story white Afrikaans South Africa tells about itself was rudely jolted when students took to the streets. The town and the university’s cosy relationship with white Afrikaner nationalism means it harbors a particularly stubborn streak of ahistorical nostalgia for a glorious (misremembered) enterprising, resourceful and entrepreneurial white Afrikaans past, one in which the stories of Black and Coloured people formed desultory footnotes.

The conscious and unconscious claim of ownership lodged by white Stellenbosch was brought into uncomfortable conflict, then, during a year when the literal and figurative whiteness of the space was brought under extensive scrutiny. Given the sackcloth-and-ashes weeping that followed, it was easy to assume that this was the first time that anything might be termed “political” had disturbed the sleep of Stellenbosch’s privileged. What was happening was a vigorous disruption of the thuggish racialized mythmaking that dominated Stellenbosch’s cultural memory.

The measures to correct the misremembering that has shaped Stellenbosch have been vigorous, and equally vigorously contested by those who would have the town remain as it was: a paean to a South African history, a history those who defended it had claimed as unassailable. In ways that embarrassed and dismayed, the young and old rushed forward in demented and parochial ways to protect Stellenbosch as symbol. The rest is social media history. 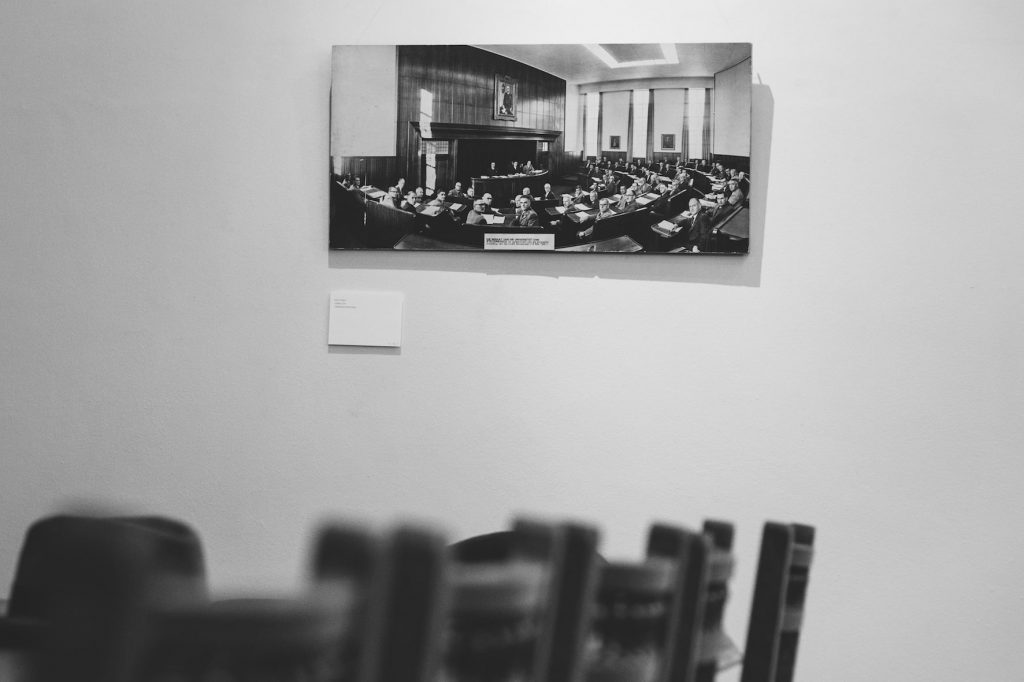 What these developments demonstrate is the pervasive power that comes in occupying space, filling it with your symbols and shoring it up against loss. The currents of thought that sacralized racial separation in twentieth-century South Africa persist in places like Stellenbosch, though their exponents may have been excoriated. These currents do so because they are consecrated in museums, where things are exhibited until they cease to please, at which point they are relegated to storerooms.

Museum storerooms are their own exhibits, of course. They shelter things provisionally (the statue of Rhodes that was removed waits in a shrouded room), keeping what still has value for someone. The decision to archive a statue, a bust, or the myriad items that signal a lived history – a pen, a chair – is a curatorial one. When Stellenbosch University removed a plaque honouring HF Verwoerd from one of its buildings, it declared that the item would be lodged in the university archives:

The removal of the plaque forms part of the assessment of all visual elements and symbols on campus, among which the names of buildings, to determine obstacles in the path of unity that should be removed or contextualized.

Note the oddly neutered language (“visual elements and symbols”) that yields nothing (and thus a lot) of the university’s ideological position, and the banality of “the path of unity”, a path seemingly littered with historical bric-a-brac to trip up the unwary. The gloss misleads, drawing our attention away from the fact that these objects continue to be given safe harbour. 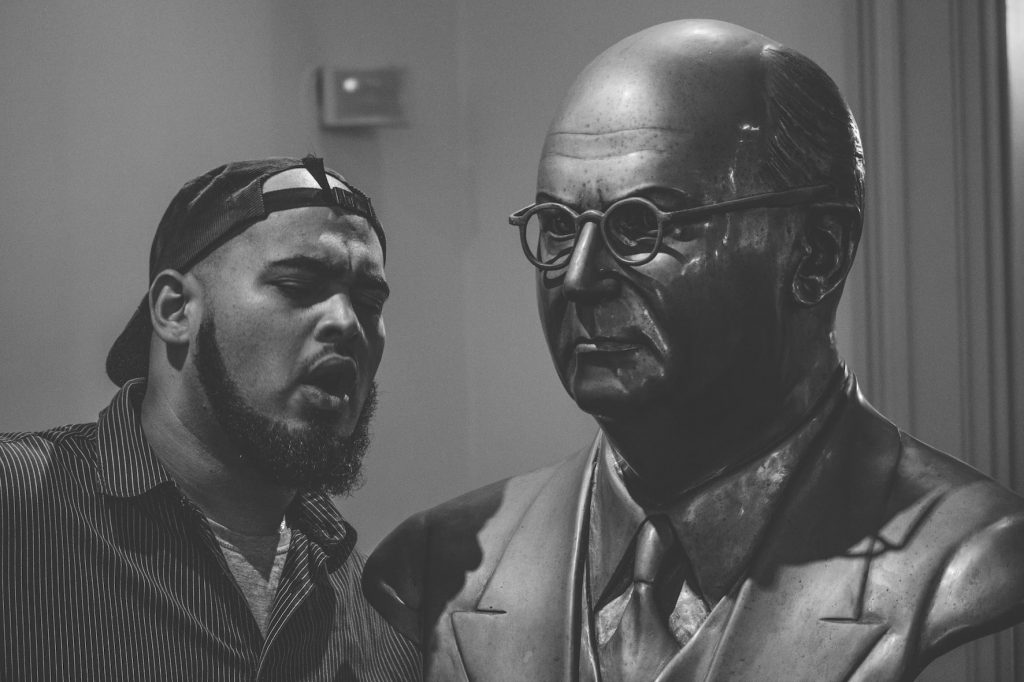 Greer Valley is a conceptual artist whose latest exhibit, The Chair, seeks to shift the logic structures that work to obscure Stellenbosch’s past. Currently running at the Sasol Museum until the end of February, The Chair performs the self-reflexive work of making visible what has been hidden from view for hundreds of years. Valley’s polemic takes particular aim at Stellenbosch University’s Museum, its displays and collections. The Chair presents alternative readings of these collections, the better to expose how museums collude in the foregrounding of certain kinds of knowledge production. 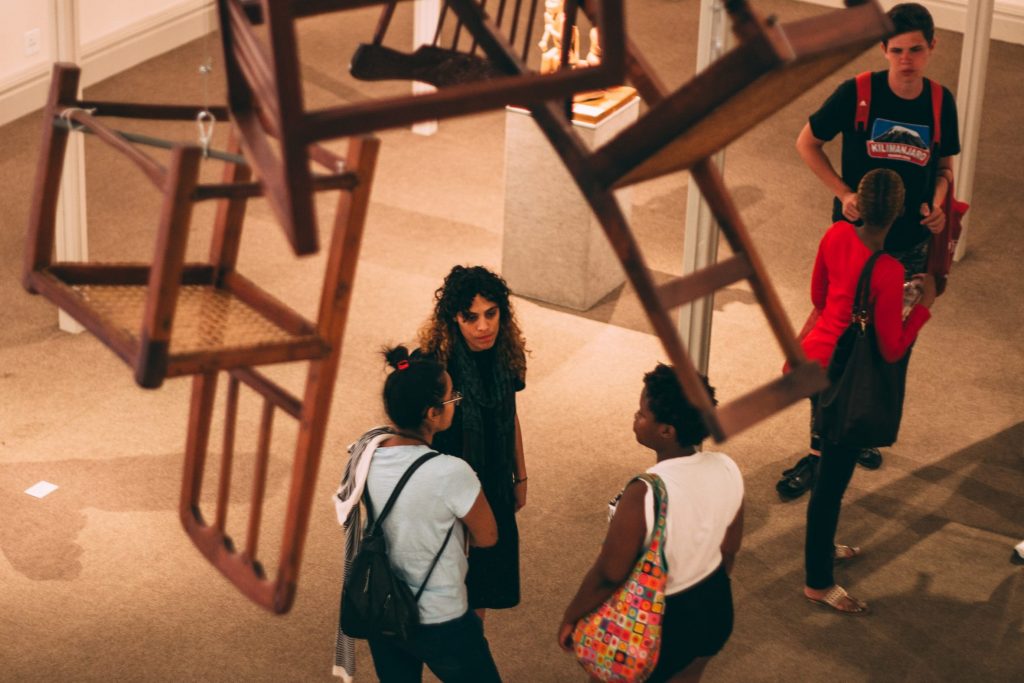 Valley’s installation opens up intriguing questions around how archives are conceived of, constructed and curated. In particular, the exhibition examines how material culture – the historical flotsam and jetsam that washes up on the shore of the present – is often encoded with non-neutral meanings, by constitutively derailing the artifacts so encoded. Valley’s installation forcefully foregrounds the intellectual indolence that lurks behind the ways that traditional African knowledge was defined as the vaguely monstrous Other of a supposedly civilized Europeanizing centre. 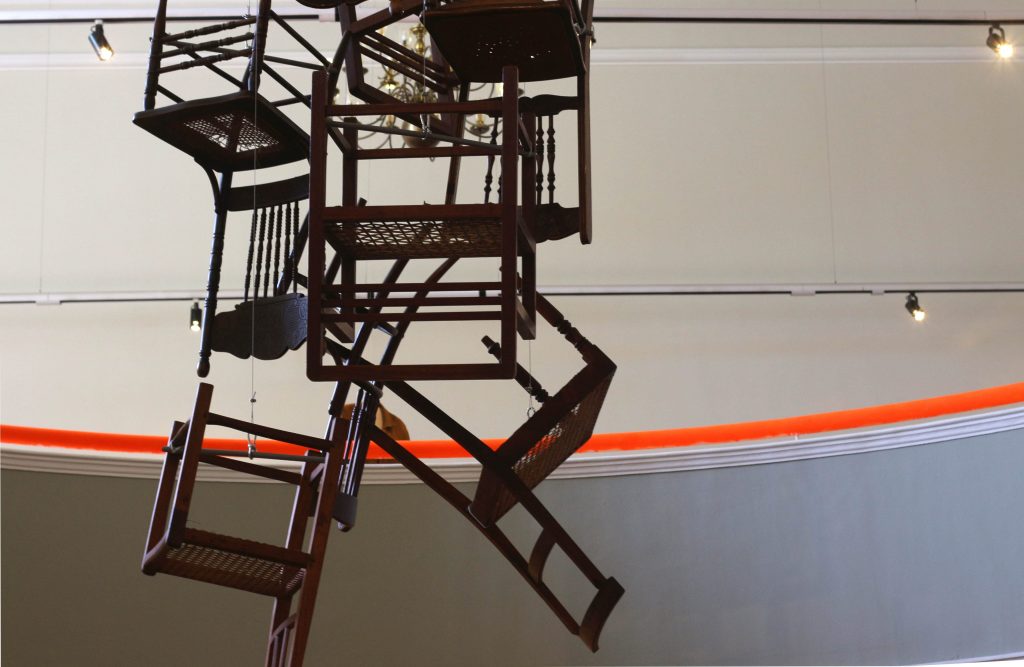 The installation asks what might be at stake when a museum draws delineations between Social Anthropology and Cultural History. In so doing, it challenges the processes that legitimized Apartheid and the regime’s supporting white Afrikaans histories at the expense of other cultural paradigms.

The exhibition opened on a balmy Stellenbosch night, with a performance by the Inzync collective, an ebullient outfit who perform their resistance to Stellenbosch’s conservatism via spoken-word poetry. The collective is part of a changing poetic economy in Stellenbosch, derailing the town’s solipsistic and narrowly defined ideas of what constitutes poetry. The four poets lead us through the exhibition, each of their poems a calling card that recontextualizes the violence of the original museum curations. 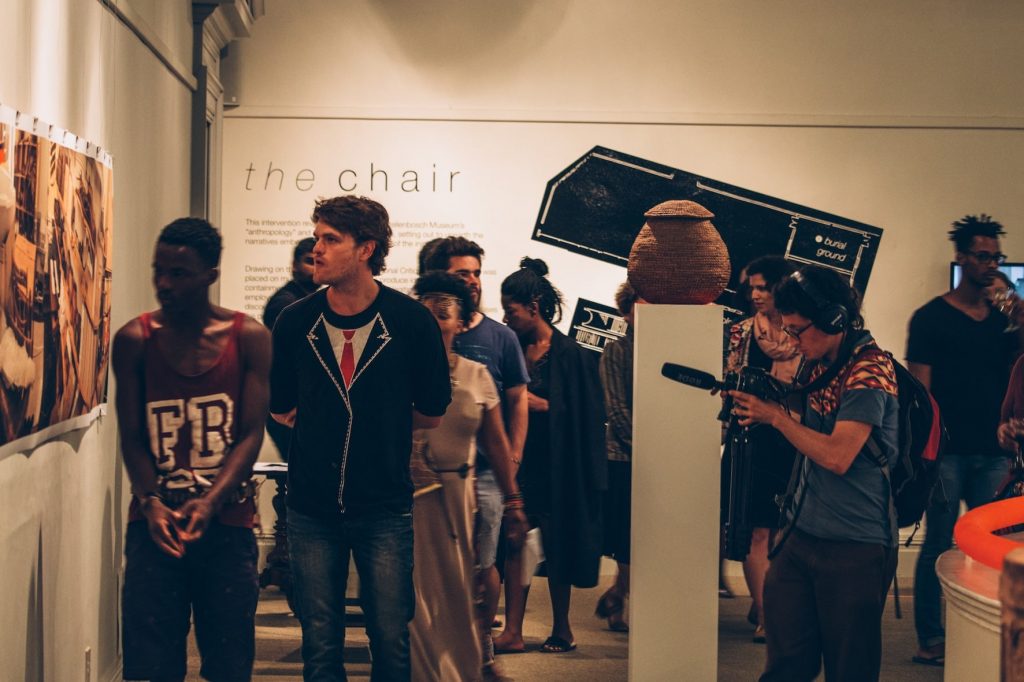 In the main room, a forbidding wooden table with a leather top dominates. A grey picture on the wall compels notice: white men, staring out at us. On one side of the table sits a chair that belonged to DF Malan – therein lies the name of the installation. It’s challenged by a traditional Nama carved stool, a thematic that runs throughout the installation. In another part of the room, emcee Adrian Different stages a rap battle against a bust of DF Malan. The performance of resistance via the figure of the emcee is particularly well-struck, connecting the histories of emceeing and rapping to this very white space.

What this exhibition has to say about objects is worth hearing. Malan’s chair – decentralized in the installation – is a site of meaning production. As Visual Arts lecturer Ernst Van der Wal argues, “It is a witness, it is a supporting object as it helped to upkeep and maintain a person and his ideologies at a certain time, and after that it was bestowed to this university with the idea that what he, Malan, as politician and bureaucrat did for South Africa was worthy of being protected, remembered and saved for posterity.” 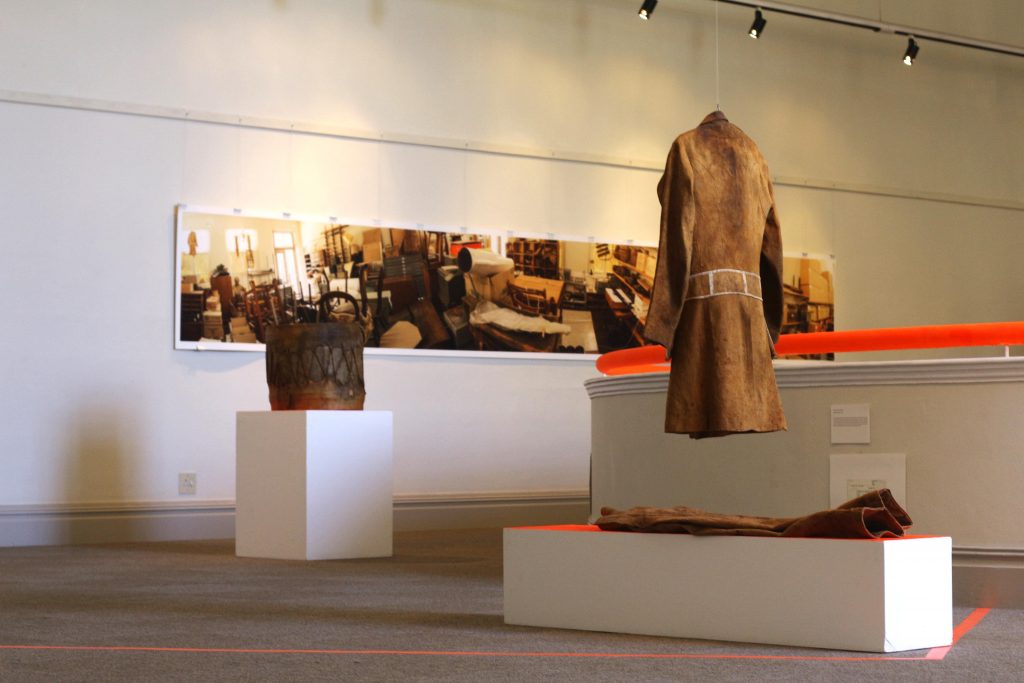 The Chair exemplifies a broad social shift that compels us to look beyond the frames, that we might better see the set of structuring ideas at work behind the reordering of the historical shards. It does this with an invigorating urgency, drawing its animating impulse from the youthful politics coursing through South Africa’s veins. 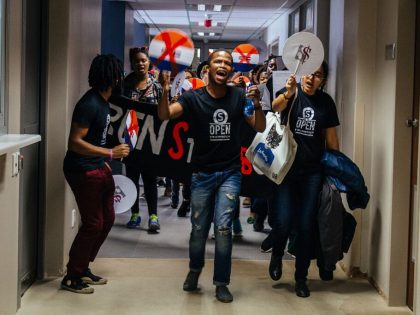 Open Stellenbosch aims to move its fight beyond campus boundaries

Over the last few months students in South Africa have called for the decolonisation of institutions of higher learning. While much of the focus has been on the experiences of students on campuses, there have …

What role should media play in the midst of controversial cultural expressions, like songs that address racist violence by white farmers against their workers in South Africa? 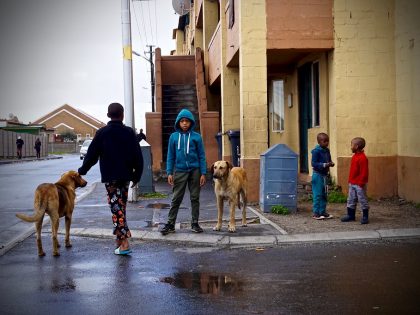 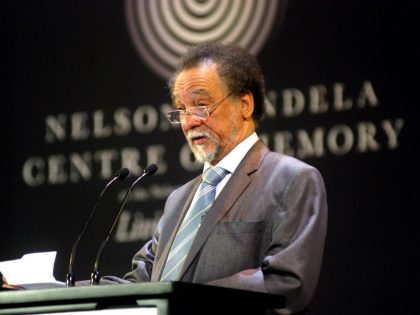 Jakes Gerwel and “the intellectual home of the left”

The fate of the University of the Western Cape, set up for coloureds, radicalized by black consciousness and from where the ANC prepared to govern.