In the 1970s and 1980s ships coming from West Africa would dock in Cartagena, or in Puerto Colombia, the port of nearby but much larger Barranquilla, and would bring with them LPs of rhythms such as South African mbaqanga, Congolese soukous and Nigerian highlife.  In almost every working-class neighborhood of Cartagena, people would design colorful sound systems, known as “picós” for the local pronunciation of “pickups,” and would play these albums, which eventually led to a truly local industry of city’s musicians playing and recording songs influenced by these genres.

Kevin Flórez is a star of an up-and-coming Colombian genre dubbed as “champeta urbana.” Champeta, without the “urbana,” is one of the most traditional rhythms of his native Cartagena. It was there were Flórez added the last name to this new genre.

Flórez grew up in one of these neighborhoods, but, he says, his life was somewhere else: it was in hip-hop. After trying that career path during his teenage years, he grew closer to champeta and helped create a mixture of those two genres, which he called “champeta urbana.” Now, after working in this new genre for about four years, his music has become a staple of Colombian parties far and wide, and it has given Flórez national acclaim and international recognition.

But as his music becomes more international and moves him closer to other countries and other genres (such as Puerto Rican reguetón, or Dominican bachata) many hard-line champeteros still seem reluctant to accept him and others playing similar music as part of their tradition.

Charles King, author of the popular champeta song “El chocho bacano”, for example, says that “people doing ‘champeta urbana’ are not true champetúos. They tried doing reguetón and dancehall, and it didn’t work out, so they invented this.”

I met with Flórez outside of a barber shop in Jamaica, Queens, to talk about all of this and to discuss his debut in New York City, which will happen this Saturday, July 24th, in Astoria.

Is it the first time you come here? What does it mean to you?

Yes, it’s the first time. For me, this first time is like a dream. I feel like I’m still living a dream. When I was very young, I wanted to know the United States, because of many musicians I liked, such as Snoop Dogg. It was a musical environment where we listened to a lot of hip-hop and its setting was New York, or Los Angeles. It was a different world, the United States. So being here, it feels like coming through the big door, because we didn’t just come to do some promotions, there are already a lot of people who know us, especially in the Latino world. There is still a long way to go, but I think this is a first step: to knock on the door of La Unai. So I’m very happy, I still can’t believe it!

What are you expecting from your concerts here?

We already played in Miami and there was a good crowd—a full house, thankfully. In New York we’ve only done a one-week expectation campaign. We couldn’t promote it for two months, or one month, but rather just for one week. And if we can fill the place with only this, it means that there is a good vibe, and that the audience really likes me.

How did you get into hip-hop in Cartagena, a city mad for champeta?

My parents were break dancers. Before I was born, they were breaking. You know the influence of hip-hop in the ’80s was great on many artists like Michael Jackson and other big celebrities. They in turn had an impact on my aunts and uncles, who started breaking. So when I was born, what I listened to was a lot of hip-hop, Afrika Bambaataa, Tupac, Notorious B.I.G., Snoop Dogg, Dr. Dre. Also hip-hop from Puerto Rico, the Mexican rapper Mexicano, who just passed away this week. Daddy Yankee has been an influence, too. So, growing up, I was called “El niño del rap” and I made hip-hop. I was invited to many hip-hop festivals in Bogotá, I even recorded a few hip-hop songs when I was 15.

Of course, the champeta I am making right now has a big influence from hip-hop. I combined champeta with the format of hip-hop, with hip-hop’s bass drums. It is a champeta sound, but including very urban sounds, such as reggae, dancehall, and hip-hop. But in the neighborhood where I grew up, hip-hop and champeta were two extremes, and putting them together felt odd at first. But I think there was a magic touch somewhere between both genres and now we have champeta urbana.

How did that combination came to be?

Well, I created it in a working-class neighborhood, listening to champeta. It was La Campiña, a poor neighborhood of Cartagena, where I was raised listening to champeta. But what I liked was hip-hop. But I thought “my thing is not the United States, I can’t make hip-hop.” Also, hip-hop is not well supported in La Costa [the Colombian Caribbean], the listeners of the genre there are few.

So I said I would take this flavor and combine it with champeta, to see what happened. I started trying to measure the balance. Then the new wave of champeta happened. It had a renewed air which helped it grow, in part thanks to me—I won the first Congo de Oro and the first Luna Award for champeta, and also a few Premios Shock, and Premios Nuestra Tierra.

Then [American reguetonero] Nicky Jam decided to do a song with me. We did it and people really liked it. And there are a lot of artists who have really liked my style, such as [Puerto Rican reguetón duo] Jowell y Randy, who say that champeta reminds them of the beginnings of reguetón.

I started this in 2011, but champeta is much older, it comes from the time of El Sayayín, but now there is a new style, a new era of champeta. And, thankfully, it has brought us to Europe, Mexico, Argentina, Peru, Chile and other Latin American countries, where champeta is being supported.

How did the old-school champetúos receive your music?

At the beginning it was very hard. They didn’t agree with this. Even today there are plenty who won’t accept it. I feel we are still in an evolutionary phase, a process of introducing this genre to other countries, and adapting it for other audiences. But old-school champetúos didn’t like this. They think that what I do is not champeta. But I think that this will be good for them as well, because people are talking about champeta. Some have considered this evolution as something bad for them. But if you look at hip-hop, you realize that the current genre is not like the hip-hop from a few years ago. It is not as underground, the world of hip-hop has changed, and that is just a result of evolution. If you stay monotonous, nothing will happen with you, your market will stay at a standstill.

People who went to a caseta to dance, usually had a machete with them, and when a fight broke out, machetes would be drawn. But the knives were too big and many started making them shorter, into a blade known as a “champeta.” People then would ask each other “are you going to that champetúos party?”. And that’s how the term “champeta” came to be. It’s kinda like the name “rock and roll,” just a stone being thrown. It’s a jocular name given to this rhythm.

That first style of champeta is called “champeta africana,” then it came the time of “champeta criolla,” made by local musicians like El Sayayín, or El Afinaíto [Flórez sings part of “Busco alguien que me quiera”]. And now we are in the third wave, which is “champeta urbana,” as I have baptized it. And it’s growing, we’re seeing many new artists in this genre.

Do you think there is an established industry for the genre? Who else do you consider part of champeta urbana?

It’s being built. I feel each of us is working on our own thing, but also that we are together in this, working to grow the genre. There are plenty of other people working on this. There is Mr. Black who is, so to speak, a legend of this rhythm. But there are many others, such as Young F, who is following the steps of the new wave of champeta. But there are many who are there, not just me.

What do you think is the state of champeta outside of Colombia?

I think people see it as a new genre, just like many of us saw bachata not long ago. We heard this rhythm and thought “what is this? Oh, bachata?”. But [famous Dominican merenguero] Juan Luis Guerra had been doing it for long. He had to explain to the world what was bachata and how to dance it.

That is what we’re doing with our champeta, just showing it to people, showing them how it’s danced and telling them its story, so people can be familiar with the genre. So I think that, from outside, it’s seen as a new genre that is only beginning. Well, at least in Puerto Rico it is a genre that is entering hard. We have fans in Peru who listen to champeta. In the U.S., many Latinos are listening to our music thanks to the support of Nicky Jam, who is an artist with a longer career, and thanks to the support of De La Ghetto, who is someone very well respected in the world of reguetón.

Check out Flórez’s hit “La invité a bailar” below: 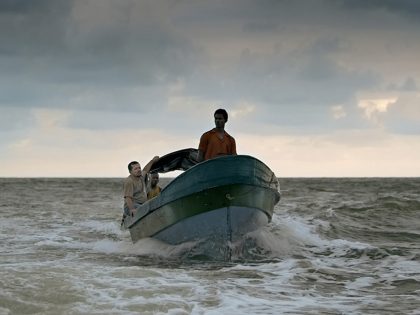 “Manos Sucias,” produced by Spike Lee, is set in Buenaventura, Colombia’s biggest city on the Pacific Ocean and also the country’s biggest port. The city is 90% black. 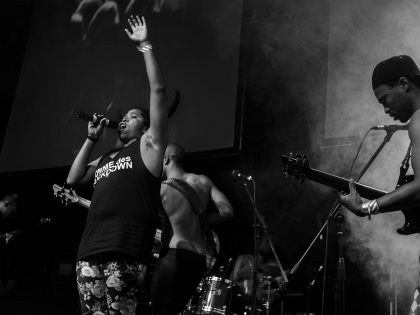 The progressive rock of The Brother Moves On is a great case study for why the category of “world music” is at best dated, and at worst problematic.