Musicians often use their platforms to comment on social and political issues and there’s been a dynamic relationship between music and political movements also, especially in the global African world. For example, one of the most visible political-cultural movements of the Caribbean is that of Rastafari in Jamaica. Formed in the early 1920s in the ferment of millenarianism and anticolonial politics, Rastas rejected aspects of decolonization, constructing an anti-global movement with its own contradictions. They cultivated an active media politics, central to which was music. Bob Marley was, above all, the most visible media avatar for Rastas. If his music wasn’t political enough, he added to that with his regular interviews. Similarly, music was a key plank of the antiapartheid struggle in South Africa, where I am from.

Hip hop and R&B combined are the dominant music of this era. This means that rappers –  like it was Bob Marley or Miriam Makeba in their times – are regularly asked for their opinion. The trouble is that some rappers should just stay away from politics.

Take T-Pain’s endorsement of “a conservative [Republican] victory [in] 2010.” It all started when T-Pain, known for his use of autotune and who is from Florida, ran into the rightwing TV host Sean Hannity on the street and repeated lines fed by Hannity. In this clip,  the comedian and commentator, Jay Smooth, break down T-Pain’s approach to politics: basically, that he doesn’t care and will just say anything for social media attention.

Then there’s of course the Senegalese-American R&B singer, Akon, who imagines himself some kind of African political leader. Most recently, Akon has attached himself to very unpopular Senegalese President Abdoulaye Wade and Wade’s vanity project, the World Festival of Black Arts, which is taking place now through the end of the month in Dakar. Then there’s Akon’s many opinion on American politics.

Akon is the son of master percussionist, Mor Thiam, and his wife, Kine, a dancer. As a result, Akon grew up between the US and Senegal. This, one would expect, would give him unique insights into life in either society. And he is generous with his opinions on these contrasts. He regularly gives interviews and comments to the proliferation of hip hop media about what could be broadly characterized as “life in Africa vs life in the United States.”

Remember when George W Bush was still US president and Akon opined to rap magazine, “The Source”:

Now, Akon has gone and written a nonsensical ditty for the ‘No Label” movement–that’s the transparent attempt by New York City Mayor Mike Bloomberg to use his billions to make a Republican presidential run in 2012. The PR from the No Label movements just sounds stupid:

It only took one conversation with Lisa Borders, one of the founding leaders of No Labels, for Akon to immediately understand the meaning of this movement’s message. Never give up your label, just put it aside to do what’s best for America. With lyrics like “See a man with a blue tie, see a man with a red tie; so how about we tie ourselves together and get it done,” Akon shares his passion for politicians to put the labels aside so we can find practical solutions to our nation’s problems. Akon stayed up all night to create this song and now you can listen to it for free and share the song to help inspire others to put their labels aside.

The economist and broadcaster, Doug Henwood, summed up the No Label Movement and Akon’s collaboration: This is some serious crap.

Considering the proximity of celebrity culture to how capitalism operates in Africa, why is it not given more serious attention? 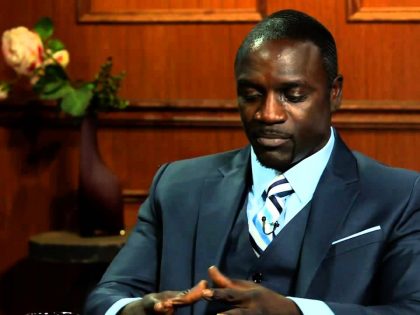 The “wisdoms” of Akon

When the Senegalese-American singer Akon is not claiming to provide electricity around the continent, he gives interviews. The latest, to Larry King, is a train wreck because of Akon’s reactionary’s views. For those in the know, this is peak Akon.

The R&B singer, Akon has released his own 2010 World Cup song with the original title “Africa.”  (Akon is the second R&B or rap singer–the other is K’Naan–to release a World Cup related song.) Keri Hilson, in zebra …