Some eight months into the 2014-2016 Ebola Virus Disease outbreak in West Africa, National Public Radio posted a story under the triumphalist headline “Firestone Did What Governments Have Not: Stopped Ebola in Its Track.” Employees at the vast rubber plantation in Liberia had not kept Ebola completely at bay. But they had, according to journalist Jason Beaubien, effectively combated it with common sense and creativity. Firestone’s American managing director and senior staff swung into action when the first case appeared at Harbel, the plantation’s company town. They established an Ebola isolation unit and set strict protocols. They repurposed machinery and infrastructure. They looked online for reliable information. As a result, no one associated with the plantation spread the disease to other workers or managers. The Ebola victims who eventually arrived at the company’s health facilities came from outside the plantation, most notably from the nearby capital, Monrovia, where the disease was clearly out of control. The Firestone plantation was the inverse of the country in which it is located, an island of sanity and success amidst chaos and dysfunction.

The story dutifully mentioned the founding of the 185-square mile plantation in 1926 by the US-based Firestone Tire and Rubber corporation. It referenced the strange aesthetic of the plantation, with its endless rows of drooling non-native Hevea brasiliensis trees bent westerly by the wind; “bowing toward Akron” as an old plantation joke puts it. But it is a one sentence, throw-away paragraph that captured both the surrealism of Firestone and 100 years of Liberian history. “The Firestone managers had the benefit of backing and resources of a major corporation,” Beaubien reported, “something the communities around them did not.”

Gregg Mitman’s Empire of Rubber: Firestone’s Scramble for Land and Power in Liberia is a superbly crafted exploration of how American racialized capital made such simple truths a Liberian reality. Mitman’s historical account largely ends three decades before the Ebola crisis.  Yet Firestone’s Ebola containment strategy and the Liberian government’s contrasting lack of capacity, it turns out, are simply one more consequence of decades of struggle to produce and profit from the harvest of rubber.

Mitman opens Empire of Rubber by positioning the book not as a history of Liberia, but as “a history of America through the lens of Firestone in Liberia.” It is a clever move, both rhetorically and conceptually. It permits Mitman to skim efficiently over well-trod terrain in historical scholarship on Liberia, namely the 19th century founding of the modern nation and the conflict of the late 20th and early 21st centuries. It also allows him to largely eschew Liberian social history in favor of character-driven plotlines. Empire of Rubber is the story of (mostly) men like Harvey Firestone and his son, Harvey Jr., and the consequences of decisions they made in the name of profit-taking and white American nationalism. It is the story of Liberia’s 17th president, Charles D.B. King, and 18th president, Edwin J. Barclay, and the devil’s bargains they made to safeguard Liberian independence in the face of European colonial expansion. It is the story of W.E.B. Du Bois and Marcus Garvey and competing visions of global Black empowerment and liberation. Mitman dives into the mechanics of taping latex and the cliquish world of Liberian elites in the Tubman era. But Empire of Rubber is primarily a portrait of power as it was and is exercised through American capital. As a teaching tool, Empire of Rubber would make an excellent companion piece to the 2018 documentary short, Uppland, a less character-driven exploration of how race and transnational corporations shaped Liberian lives during and after the Open Door era of resource extraction.

Mitman’s telling of this story of commodity imperialism begins with a meeting of the Rubber Association of America in 1917 at New York’s Waldorf Astoria Hotel. Harvey S. Firestone was pursuing a quixotic plan to secure control of the last link in the commodity chain of tire production: the production of raw rubber. Firestone was already a major player in American political and economic life. Mitman’s account of Firestone’s luxury camping tours with Henry Ford, Thomas Edison, John Burroughs, and American presidents Calvin Coolidge and Warren Harding offers a highly readable look at how American policy (foreign and domestic) and the interests of wealthy white industrialists were synonymous throughout the early 20th century. At the 1917 New York meeting, William Howard Taft, a former president of the US and former governor-general of the Philippines, reinforced Firestone’s message that American interests required stability and cooperation in the tropical climates conducive to growing rubber trees. Brazil, southern Mexico, the Philippines, Singapore, Ceylon, the Dutch East Indies and the Malay Archipelago were all important sites for the production or trade of rubber, and none of them were reliably “under the American Flag,” as Taft put it. When one of his agents reported back to Firestone that Liberia offered both the perfect environmental conditions for rubber production and a government in need of friends and money, Firestone made a calculated gamble that proved, over time, to be hugely profitable. “The benefits accrued to Liberia,” as Mitman closes the last chapter of the book, “are far less clear.”

That final note of ambiguity is important. There is no question that the American “empire of rubber” was rapacious and racist. But its history is not simple. The most fascinating chapters of that history, and of Mitman’s book, deal with the maneuvers of figures like President Barclay, who saw US capital ambitions as a vehicle for development and stability—provided he could effectively safeguard the nation’s sovereignty and independence. Barclay’s predecessor cast his lot with Firestone as the alternative that might preserve Liberian independence from both Garveyism and European colonials. When King fell victim to Firestone’s political manipulations, Barclay proved somewhat more adept at parrying efforts to turn Liberia into a banana republic. Mitman’s accounts of how Barclay strategized through and around Firestone, playing European, American, and the League of Nations’ pressures against one another, are as engrossing as following championship chess. The stakes were high, the opponents formidable, and the penalty for error consequential.

Despite Barclay’s successes, the game was rigged. Liberia never became the incubator of African and African American managerial expertise that W.E.B. Du Bois hoped for when he aided Firestone’s ambitions in the West African nation. Du Bois had long since distanced himself from Firestone by 1963, the year of his death; the year of Harvey Firestone, Jr.’s retirement and the year that concludes Mitman’s book. But Empire of Rubber deftly captures the inequities of extractive capital without resorting to caricature or shorthand. It is easy to generate umbrage by focusing on Firestone’s exploitative, long-term lease of much of central Liberia, and to conclude from it that Liberians were hapless victims of American cartoon capitalists. But the subtleties of how politics, race and corporate influence worked in the American sphere of influence is told much more effectively through careful elaboration of historical details.

The Firestone-sponsored Harvard University Department of Tropical Medicine expedition, for example, offers Mitman a rich case study for exploring the potent concoction of scientific inquiry, nationalism, racism, and industrial development that was the true engine of American colonialism-through-private-enterprise. The results are no less outrageous. But they allow more space for considering such complex figures as the Harvard-educated Plenyono Gbe Wolo, son of a Kru Paramount Chief who played an important role advising Firestone and the Harvard expedition, but then largely disappeared from the company’s historical record. Or Lester A. Walton, the long serving African-American US government minister in Liberia and a strong backer of Firestone’s ambitions in the country. Together such figures paint both a more believable, and in many ways more frustrating, account of the wealth of a corporation and the impoverishment of a nation.

Mitman, a medical historian, does an admirable job of making Hevea brasiliensis a character in this story without overplaying the “agency” of latex or rubber trees. Industrial rubber production, for example, allowed pathogens such as smallpox to flourish, which required more research and more severe corporate interventions into the lives of its labor force. A rubber plantation is a peculiar form of forest, one that does ecological violence and catalyzes real human violence. But it is ultimately human choices and their consequences that drive Mitman’s story.

Among the most poignant of those consequences is the violence of land dispossession, a leitmotif throughout Mitman’s Liberia work. His 2016 film, The Land Beneath Our Feet, posits large scale land grabs and alienation from the land as key to understanding the precarious lives of many Liberians today. Empire of Rubber makes an arguably bolder and more sweeping point.  Calling Firestone’s corporate holding in Liberia a “plantation” is not simply a technical term. One cannot truly understand Liberia’s history writ large—or American capitalism—without a deep reckoning with that term and all its sociological and political, as well as economic, meaning.

Reading Mitman’s book, I was reminded of a critique heard repeatedly in the run-up to Liberia’s 2005 elections, and repeated again in the 2011 run. President Ellen Johnson Sirleaf faced George Weah, whose campaign was predicated in part on his ability to mobilize disenfranchised youth. Weah supporters frequently referred to Johnson Sirleaf as a typical member of the Liberian elite, someone who felt more at home in America and who regarded Liberia as “a farm”—a place from which to extract profits from the land, profits that would have little benefit for the country as a whole. Like the NPR story’s casual invocation of Firestone’s mighty corporate backing in its fight against Ebola, it was an easily overlooked comment that nevertheless spoke volumes about Liberian history, but only to those who recognized it as a recurrent pattern and a peculiar form of corporate colonization.

Fortunately, in Empire of Rubber Gregg Mitman supplies his readers with ample tools for recognizing the imperial forest in those peculiar trees. 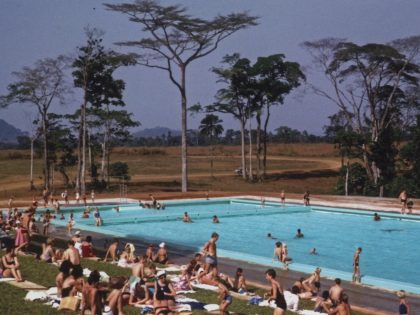 The ruins of a mining economy

The physical and psychic ruins of colonial mining practice in a small town in Liberia. 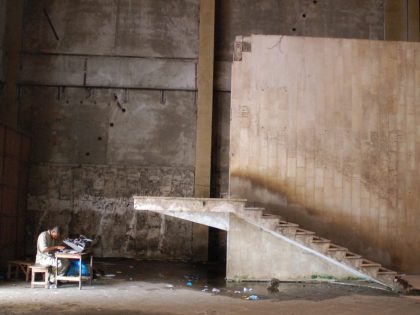 What kind of city is an African architecture for?

Despite a chronic housing and land shortage, Liberia’s capital has not seen militant urban social movements. 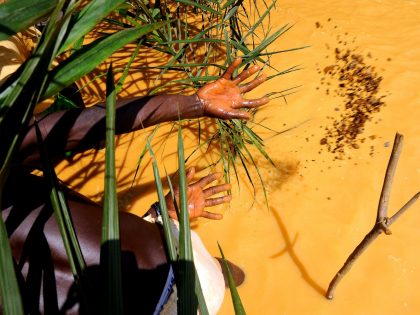 What can the photographs of American anthropologist Danny Hoffman tell us about Sierra Leone and Liberian mineworkers or about mining in West Africa?