“I was born in my 23rd year. But my life was never quite mine.” Opening with these enigmatic words, the film Neptune Frost (2021) introduces a mystery. To whom do the words belong? What does it mean to come into existence after nearly a quarter of a century? Who has stripped this subject of complete self-ownership and why? Such compelling questions frame the film. One possible answer is implied early on, in panoramic views of miners at work, yet it proves both persuasive and profoundly limiting. This kind of labor, performed amid conditions of extreme scarcity, clearly constrains autonomy: low-wage workers are treated as interchangeable and disposable. Rapacious purveyors sell people’s land out from under them; the newly displaced are told that they now have two options: leave or work the mines for room and board. (“When I asked what was being mined,” recalls one worker, “I was told, ‘Technology.’”) But Neptune Frost is equally interested in the broader implications of such extractive economies. To mine is one thing, to power the armies of the global North quite another. “The resource-rich,” notes one character of Africans’ proverbial curse, “face a world beholden to the currency of our depletion.”

The business of extraction pervades the film: somewhere in the global South, in a Black-majority country (the film was shot in Rwanda, though its setting is never directly identified), miners remove coltan from the earth, their drudgery overseen by a sadistic boss given to violent outbursts. When a worker named Tekno (Robert Ninteretse) pauses to contemplate the metallic ore that his muscles have managed to dislodge, the boss strikes him with a pickaxe, shouting, “Back to work, dreamer!” The grievously wounded Tekno dies in the arms of his brother, a fellow miner named Matalusa (Bertrand Ninteretse). The latter’s lament inspires collective mourning, and soon all of the workers are involved in an elaborate song-and-dance routine. For Neptune Frost is, among other things, a musical, its syncopation of the workplace is part of a long cinematic tradition dating back at least to René Clair’s À Nous la Liberté (1931) and including Lars von Trier’s Dancer in the Dark (2000), in which browbeaten American factory workers burst into song. The socialist Second World, whose collapse Neptune Frost registers at one point, produced its own musicals about workers, such as Ivan Pyryev’s 1948 Ballad of Siberia. Working at Paramount in 1938, Fritz Lang was able to inject a quasi-socialist message into his Brechtian musical You and Me, which features “Song of the Cash Register,” among other Kurt Weill originals. Tunde Kelani’s Nigerian musicals The Campus Queen (2004) and Arugba (2008) also come to mind, though they are more about university study than salaried labor.

Brecht is certainly relevant to Neptune Frost, whose songs (many of which were written by co-director Saul Williams, who also penned the script and composed the hypnotic instrumental score) suggest a certain didacticism—a desire to convey the precise nature of the coltan economy. “The worker pays the price, it seems,” intones one miner in the wake of Tekno’s murder. “Metal is precious currency—Third and First World currency. Black market currency. Drumbeat, heartbeat currency. That old Black-bodied currency.” It’s like a Brecht-Weill number altered to account for coltan mining in the Great Rift Valley. Some performers sing in recitative; others look directly at the camera, challenging the film’s viewers to consider their possible complicity in Africa’s underdevelopment.

As the echoes of Brecht and Weill suggest, wordplay is central to Neptune Frost. The multiple meanings of “mine” come into play almost immediately; individuality is bound up with extraction. The literal mixes with the metaphoric. Boundaries are blurred. And a soft-spoken pastor preys on the desperate. Hovering over the coltan mine, watching workers die and then burying them, this doddering man of the cloth recalls the Christian missionaries who lubricated colonial rule. His function is to facilitate the actions of the mining company—to palliate the pain of the workers by promising them ultimate relief in heaven. His predatory disposition even extends into sexual territory: offering spiritual comfort to the title character, the pastor is quick to make a pass. Startled, confused, and more than a bit frightened, Neptune strikes the older man’s head—a reflexive blow that mirrors the more deliberate assault on Tekno, down to its fatal outcome. Hastily packing a few belongings, including a pair of high-heeled shoes, the male-presenting Neptune (played by male actor Elvis Ngabo “Bobo”) flees the scene of the crime.

Soon, Neptune is dreaming of other worlds, other selves. The character’s first dream, like much of the rest of the film, recalls Jean-Pierre Bekolo’s 2005 science-fiction film Les Saignantes, which imagines a future in which intensely familiar forms of political corruption persist amid some otherworldly sights and sounds. Neptune Frost is full of blue light; nocturnal scenes seem to be illuminated by so many personal electronic devices (co-director Anisia Uzeyman also served as cinematographer). While asleep, Neptune receives messages about hacking (including into land rights and ownership) and meets The Wheel-Man (Eric 1Key), a spirit guide (inspired by Dogon mythology) out of whose crown sprout several spinning bicycle wheels. The eerie sight of The Wheel-Man is one of the film’s greatest and most original achievements; this unearthly figure ranks with some of cinema’s most memorable creatures.

Equally striking are the images of e-waste that link Neptune Frost to African material realities (namely the large-scale dumping of such waste throughout the continent) while also giving the film a compelling sci-fi look. Though described as intersex in the film’s press materials, Neptune undergoes a distinct transgender journey; laid out on a slab, attended by various figures whose utterances bemoan binary thought, the character changes outwardly. Now played by actress Cheryl Isheja, Neptune awakens in a field in female-presenting form. Whether the character has in fact “transitioned” remains unclear; the film’s opacity is apparently deliberate—part and parcel of its queer critique. (“As far as I’m concerned, a person has the right to be opaque,” said Édouard Glissant.) The “new” Neptune (born at 23?), famished from traveling, wanders into a bar and restaurant, where a man in a white linen sport coat and purple dress shirt sits down and says, “The Authority’s henchmen are everywhere.” If this is a pickup line, it doesn’t work. Undeterred, the man, who calls himself Innocent, goes on to talk about a rigged election (“we already know who will win”) and “what the police did at the university.” These are, of course, common complaints, and they seem to endear Innocent (played by Dorcy Rugamba) to Neptune. An ominous note is struck by the bar television losing its signal (a football match suddenly cuts out), but the two characters are soon making out. When the eager Innocent reaches under Neptune’s dress, however, he feels something that makes him recoil.

Neptune’s instinct is to run away. Eventually, the character ends up at a kind of commune—a rural hacker collective that suggests an art installation. Consisting of discarded electronics (particularly desktop monitors), the place—dubbed Digitaria—is a commentary on Africa-as-dumping-ground. But it also underscores the continent’s resource-rich status. Coltan, which one character describes as “the power in the earth,” is essential to the production of those devices that the hackers skillfully repurpose. Yet many of the hackers are themselves made up of electronics. One woman, a victim of marauding soldiers, has a prosthetic arm that serves as a sort of computer; others clad themselves in blankets decorated with PC keyboards. (The remarkable costumes are by Cedric Mizero.) This posthuman landscape is also, ostensibly, a postwar one. There is much talk of a past conflict, but also the sense that organized violence persists. Armed soldiers patrol the countryside, yet the tech-heavy commune is, by design, anti-patriarchal. (According to Memory, brilliantly played by the remarkable Eliane Umuhire, the soldiers took up arms “because they were born boys. They are priests at their own funeral.”) Before the war, women hid indoors; now, they sleep outside, where they also ply their technologically sophisticated trade.

Neptune’s arrival at Digitaria closely follows that of the equally itinerant Matalusa. At one point, the latter explains the origins of his late brother’s name: “My father learned the word ‘technology’ from a man selling knives. The man told him that technology was what made the blades stay sharp. My father fell in love with the word and named his second son Tekno.” In Neptune Frost, the human and the nonhuman are not necessarily separable. (When Innocent reaches under Neptune’s dress, is it a penis or a computer part that he finds there?) The commune is described as being “like another dimension,” yet it—or, rather, the magnetic attraction that Matalusa and Neptune share there—enables privileged access to the tech-rich here and now.

The connection between Digitaria’s newest arrivals is sufficient to power an unprecedented global hack, via which the commune’s residents are able to project their progressive message. But their euphoria is short-lived. Rather than disrupting neocolonialism, the hack is experienced simply as a “poetic” gesture from the global South—a fun stunt “from below.” “This changes nothing,” admits a dejected Digitarian named Psychology (Trésor Niyongabo). “It’s ‘poetry’! Why not issue an attack? Crash the market? Erase debt? Reveal arms sales? Expose corruption? Hold estates ransom? Why not make a demand?”

Neptune Frost recognizes the West’s maddening capacity to remain impervious to Africa and Africans. The film ponders the ongoing plunder of an entire continent, as well as the attendant—and paradoxical—the invisibility of its inhabitants, who toil in the mines so that they may “fuel the world’s machines,” as one character puts it. “We do the work that is hidden behind their screens,” notes Matalusa. (“We’re the people you don’t see,” says Chiwetel Ejiofor’s African immigrant in Stephen Frears’s 2002 film Dirty Pretty Things, which explores similar themes of dependence and exploitation.) Neptune Frost communicates a message of defiance. Middle fingers are repeatedly directed at the camera. A song that Matalusa sings features the refrain “fuck Mr. Google.” “On this continent, we have always been cloaked in anonymity, like the hidden face of God,” suggests Psychology. “We’re not sacrificed—we’re murdered. We mine, but we don’t own what we dig.” The brutal logic of extractive economies is plainly stated: “They cut costs by exploiting. They cut the cost on oil through warfare, then fuel their armies.”

Neptune Frost is, for the most part, a visual marvel. (I could have done without the recurrent shots of a pigeon in simulated flight—it’s painfully obvious that the poor bird is being held aloft by offscreen hands.) The film offers a bracing form of political cabaret. If its themes and motifs are, on occasion, overly legible, it never seems naive. It knows that extraction is everyone’s problem. 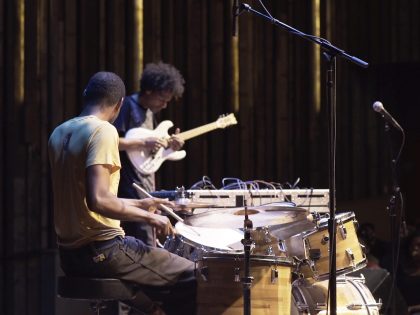 Collapsing the binaries hard-wired into the logic and narrative of “uber-gentrification;” the latter representing the conquest of science over art, technology over soul and innovation over old. 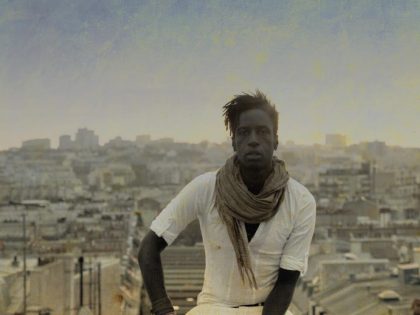 The last day on earth 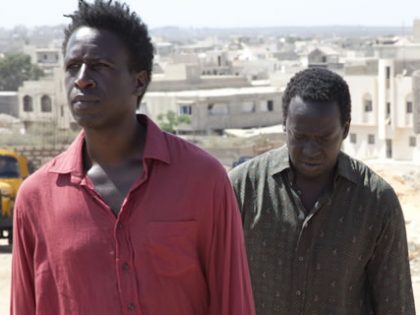 There is something to be said about the sheer volume of highly-anticipated films made by black filmmakers or about communities of color. 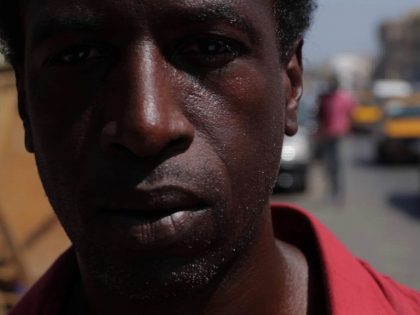 No one ever finishes anything, we just stop

In Alain Gomis’s “Tey’, ‘Aujourd’hui,” a man lives the last day of his life.