I have never imagined having one library. Maybe because I always had many. And it is not the usual classification between the books I have at home and those I have in my office. Or between scholarly books, the books I use for my profession, and books of general interest. Granted, there are some books I specifically bought twice, because I always need a copy at hand—Nietzsche’s Die Geburt der Tragödie. I say the title in German because these are mostly books, I prefer reading in the language they were written in. Philosophy books. Books of poetry as well. Cesaire’s Cahier d’un retour au pays natal. Fanon’s Les damnés de la terre. Which brings me to my core point: I have three libraries, one in German, one in French and one in English. They coincide with the three languages I use. And because I have moved between three continents and languages, my three libraries have evolved over the years. It is true I started buying books in English late, as I became conversant in the language after I moved to the US.

I have many copies of Morrison’s Beloved as well. But of course, I teach in English. After 20 years in the US, most of my books are now in English. I still buy and read books in German. After all, my thinking happens in that language, and occasionally there is a request for me to write a text in German. When it happens, my whining that I am losing my German at the expense of English fills my mind and pages! Having a library keeps a language alive. It is a truism, but that is how I keep my three languages going. My libraries keep me in conversation with not only the language in which the books I am reading are written, but with the type of ideas they articulate. The beauty of a book is indeed that it displays a certain complexity of thought, and forces one to focus. It is its core advantage over television and life. Of course, in the process, it strengthens one’s attention span. The struggle to reclaim our attention span is real, given the onslaught of social media. And I have been a carnivorous user of my handles.

To the point, there are very few books I always come back to, beside the four I mentioned above.

Ibn Khaldun: The Muqaddimah: An Introduction to History. What it did was provide me with a landscape of thinking outside the Western canon. I have two copies of it, one in French and one in English—I do not read Arabic—and I always come back to its pages. It starts with a useful definition of writing. I say useful because most people take writing for granted. Very few have taken the time to think about the philosophical ramifications of the art it entails, its relation to calligraphy, to design, to drawing, painting, and of course to bureaucracy. And it is what this book does. Reading it installed me inside the landscape of a system of thinking I have not left yet.

Idelette Dugast: L’Écriture Bamum. This is a technical book, I would say. But very few books have defined my way of looking at things the way this one did. I do not have a real copy of it, as it is not available. I made photocopies ten years ago when doing research at the Library of Congress. The book presents the history and the system of writing of King Njoya, who ruled the Bamum until 1933, and wrote many books. The manuscripts of the books he wrote are displayed in his palace, in Cameroon and digital versions can be accessed via the British Library, thanks to the momentous work of scholars.

Wole Soyinka: Myth, Literature, and the African World. The first time I asked students to read this book, my colleagues told me it was outdated. And indeed, the language is better understood when one remembers the scholarly discussions of the 1970s. Taken out of that intellectual context, some of Soyinka’s rumination simply would not make sense. And yet, aren’t all books like that? At the core of the book’s quest is a simple conviction: the constitution of an African system of thought is the mental landscape out of which literature and action are crafted. It is the touchstone of idealism. In his arguments, Soyinka uses Ogun to parley himself into combining thought and action. He uses Nietzsche to make his case, understandably. In retrospect it is his life one can read as the core argument of this book he wrote in the form of a manifesto, after his release from prison. It is a very intense book; a book written by someone who had spent months in solitary confinement. You Must Set Forth At Dawn, his 500-page memoir can be a useful introduction to the thoughts of this very slim book.

There are more books I read repetitively but let me stop here. 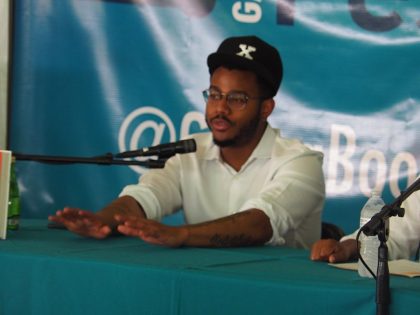