As white and black politicians negotiated the end of the apartheid regime in the 1990s, a civil war raged in the African townships of the Witwatersrand (known popularly as the Rand). The war killed some 3,000 people and injured thousands more. The violence had complex causes, but as interviews with combatants make clear, many understood it as a Zulu-Xhosa conflict. “We are the Zulus and we are fighting the Xhosas” or “We are the Xhosas and are fighting the Zulus” were common statements. Many combatants, moreover, used language to distinguish Zulus from Xhosas. As one explained, “The Xhosas were only looking for a Zulu-speaking person. They were just looking for your tongue, which language you were.”

Interviews outside the Rand confirmed that language equaled identity in powerful ways in the 1990s. The researchers Mary de Haas and Paulus Zulu, for instance, noticed that in the KwaZulu-Natal region “many people … describe themselves as Zulu, and explain this identity primarily in terms of the language they speak.” A similar paradigm applied to Xhosaness. The Ciskei homeland ruler Brigadier Oupa Gqozo (he ruled between 1990 and 1994) explained that: “We consider all the Xhosa-speaking tribes to be Xhosas.” The Mpondo mineshaft steward Mlamli Botha likewise argued, “When I say Xhosa, I mean the Xhosa-speaking people. It might be Pondos, Bacas, Bomvanas, Xhosas, but they are [all] Xhosas.”

The violence between 1990 and 1994 threatened but did not derail South Africa’s transition process. After its successful and much-celebrated birth, postapartheid South Africa initiated numerous efforts to build a unified nation. Most of these initiatives were aimed at overcoming the stark racial divides the country had inherited from its colonial and apartheid predecessors. They included practical initiatives such as the Truth and Reconciliation Commission and more symbolic gestures such as the frequent mobilization of the image of a rainbow nation. However, the postapartheid state made no significant efforts to engage critically with language-based ethnic divisions, even though they, too, represented the legacy of the political, legal, and linguistic interventions of colonial and apartheid-era rule. This is problematic because, without this critical engagement, it is impossible to understand why language has become a battleground in postapartheid power and identity politics.

Since 2007, activists who self-identify as Ndwandwe, Qwabe, Hlubi, and others have organized heritage associations, launched social media sites, and initiated language development projects with a view to proclaiming and reviving identities that have hitherto been submerged within Zuluness and Xhosaness. The Hlubi, for instance, appointed a “chief language research officer” tasked with “work[ing] with relevant stakeholders in the development and promotion of the Hlubi language.” They also established the “IsiHlubi Language Board” and charged it with finding ways to reverse the language-induced identity shift toward Zuluness and Xhosaness. Part and parcel of the board’s strategy is to popularize the Hlubi speech by (among other things) getting it recognized as one of South Africa’s official languages. Two members of the language board explained their efforts, stating, “The majority of youth do not even know that there is a language called isiHlubi … because one speaks this language that is taught in school [i.e., Zulu or Xhosa] … so we found there is a youth problem.” As a result, they say, “The main aim is to actually collect all the youth … [by] promoting isiHlubi to the youth [so as to] make it popular so that they know who they are [and] they grow knowing who they are. … Our main battle is to get the language officially recognized as an official language; that’s our struggle as the Language Board.”

These efforts have produced antagonisms with the defenders of the older, language-based notions of Zuluness and Xhosaness. As Jabulani Sithole notes, these recent dynamics have generated “‘war talk,’ which was last witnessed during the peak of violence in the 1980s and early 1990s.”

My book, Divided by the Word: Colonial Encounters and the Remaking of Zulu and Xhosa Identities, explains why languages have become a battleground in postapartheid power and identity politics. It shows that the ancestors of modern South Africa’s Zulu and Xhosa populations did not mobilize language as important markers of belonging; nor did they conceptualize their vernaculars as distinct Zulu or Xhosa languages. Instead, the Zulu-Xhosa language divide emerged from a process that involved the long and complex interplay of a host of actors: Bantu and Khoesan speakers; European missionaries and African interpreters; black and white intellectuals, educators, and apartheid ideologues.

The roots of the divide lie in the deeper past, when encounters between Bantu and Khoesan speakers first produced the language differences that would be mobilized many centuries later to construct distinct Zulu and Xhosa languages. It continued into the eras of exploration and colonization, when European officials, naturalists, and missionaries downplayed these differences to suggest that South Africa’s indigenous population spoke a single language. It reached a crucial turning point in the nineteenth century, when European and American missionaries and their African intermediaries created firm distinctions between Zulu and Xhosa speakers while working on Bible translations. By the twentieth century, these foreign players, along with white and black intellectuals, educators and ideologues, designed language-education programs that embedded the Zulu-Xhosa divide in the South African consciousness.

These arguments in my book are based on research in seventeen archives in four countries. A careful reading of these records shows that Africans were deeply involved in this process. European missionaries’ confidence in a single language paradigm, for example, increased when they traveled in the company of African interpreters who confirmed that the region’s various speaking practices were mutually intelligible and thus part of a single language. African interpreters came to this conclusion because they belonged to the Gonaqua, Gqunukhwebe, and Ntinde polities, which had historically ignored language as a marker of belonging in order to forge viable polities in the linguistically complex environment of the eastern Cape borderlands.

American missionaries gradually came to a very different conclusion. By the middle of the nineteenth century, they began to assert that the speech forms of Natal and Zululand formed a separate Zulu language that was not only different from the region’s other vernaculars but also superior to them. This difference of opinion can be explained largely by the American missionaries’ growing reliance on the language expertise of local Africans whose understanding of language had been shaped by their upbringing in the Zulu kingdom, which had begun to differentiate between “superior” and “inferior” speaking practices in the late 1810s. Thus, if early assumptions of a single language community reflected the attitude of African interpreters from borderland communities such as the Gonaqua, later ideas about the existence of distinct Zulu and Xhosa languages can be traced to African intermediaries with ties to the Zulu kingdom.

The rejection of the single language paradigm was of long-term significance for the development of language and identity in the region; it reconceptualized what used to be considered a single language as two distinct Zulu and Xhosa languages. In additional chapters, my book covers the full development and normalization of this language divide, describing in much detail the African and non-African actors as well as the language standardization and education programs that led to this outcome. For example, in the Natal-Zululand region, language standardization involved missionaries and Africans proclaiming what they called the “King’s Zulu” to be the gold standard of the Zulu language. In the eastern Cape region, after a conflict-ridden process, they developed standard Xhosa by harmonizing the region’s diverse speech forms into a “more perfect” language. African pupils then had to perform these standards as part of mother-tongue education programs. This may not have succeeded in getting all of them to speak standard Zulu or Xhosa perfectly, but it did get them to think of their vernaculars as belonging to these languages. Combined, these arguments hold the key to understanding the development of Zulu and Xhosa as powerful language-based identities in South Africa, an understanding that can help us make better sense of the Rand violence in the 1990s and the language-oriented activism of the new South Africa.

The burial of African languages by Africans themselves has ensured our total immersion into colonial culture. 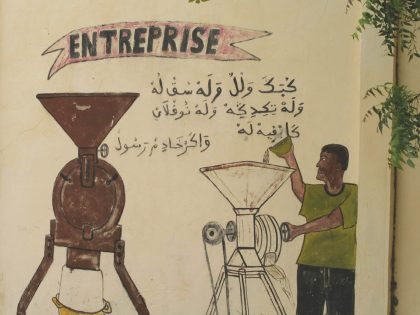 Ajami is the centuries-old practice in West Africa of writing other languages using the modified Arabic script. It is also more widely dispersed than we give it credit for.