One day, when I was 13 years old, I had a visit planned with a friend in my neighborhood in Lilongwe, the capital city of Malawi. They lived about a 10-minute walk away from my family’s house. My parents almost always drove my siblings and I between our homes and our friends’ homes back then, no matter how close or far, but they must have been out that afternoon, and my friend and I had already made our plans.

I believed—with good reason—that I needed to ensure as best as I could that I wouldn’t be a target on that short walk. I’d had to quit one of my extracurricular activities the year prior, after being harassed by one of the male grounds staff at the activity site. I had been 12 at the time, so I knew that my age wouldn’t be a deterrent. Before leaving my house that afternoon, I dressed as androgynously as I could: baggy jeans, baggy shirt, big jacket even though it was midday in summer, a baseball cap—facing forward so as to hide my face—and high-top basketball sneakers. To onlookers along my route I must have looked ridiculous, but it was what I thought I had to do to keep myself protected against sexualized attention.

Last October, an 11-year-old girl doing the same thing as I was that day—walking from her home to the home of someone she knew, in her case an aunt—was raped en route to her aunt’s home by a man who pretended to merely be offering her a ride on his bicycle. Since then, the case has become the central narrative of Malawi’s #MeToo moment, the latest in our ongoing fight against gender-based violence. She is far from the only girl child whose victimization has made public headlines, though: the month before, the mother of a 14-year-old girl who had been sent to live with one of her uncles filed a police report alleging that the girl had been the victim of repeated rape at the hands of her uncle over the course of several months. Last November, another girl, this one 12 years old, was raped by an employee at her grandmother’s home.

Almost a quarter century on, the fears I had held at 13—fears that I would become the victim of sexual violence, even at my young age—stand, brutally, just as correct.

The legal term used in Malawi for the rape of an underage female is “defilement.” It is a legacy of Malawi’s colonial era, when the law specifically designated girls under the age of 13—now 16—not as people in their own right, with sexualities of their own, but rather as the property of their families. (There is no term for the sexual violation of boys under any age; it doesn’t exist in the current legal code, a separate problem entirely.) The legal nomenclature of defilement—rather than statutory rape—is critical to understanding the ongoing problem of the rape of underage girls in Malawi and the relatively lax sentences handed down to offenders, should cases even make it successfully through the court system.

When a girl is conceived of as an object—as the property of the men who effectively own her rather than as a person in her own right—then the sexual violation of that girl is, at most, the sullying of property, not violence against a person and their fundamental human rights. Though I would not have had the words for it back then, my 13-year-old self understood that had I ended up a victim—in other words, had my harassment experience as a 12-year-old been transposed to a more extreme point on the same continuum of sexualized violence—I would have been held at least somewhat responsible for not protecting the virtue of the property that was my body, and so would my parents.

According to a 2020 national report, “Situational Analysis on the Increase of Sexual Violence in Malawi,” there was an 11% increase in reported cases of the violation of underage girls between 2018 and 2019, and a 19% increase between 2019 and 2020. While there is debate as to whether or not cases have truly risen or whether it is merely the reporting of the crime that is on the rise, the fact is that the endemic sexual violation of underage girls remains a dark stain on Malawian society—a society that otherwise purports to hold deeply conservative and religiously informed values around sexual piety for both men and women and to value the role of women in families and communities.

Even to report these crimes is often to subject not only the victim but her family to revictimization by way of Malawi’s broken criminal justice system. Laws do exist to penalize the people who commit these acts against girls, but the road to getting there is riddled with obstacles. These range from the money required to even engage legal counsel, to the myriad paperwork and reporting requirements of pursuing a case, to the sheer time involved that can take away from working family members’ paid employs, not to mention the numerous corrupt actors within the system who flat out will not do their jobs unless covertly provided with additional financial incentives beyond their standard paychecks. Many endeavors to obtain justice, then, are preemptively arrested by the structural violence of the criminal justice system itself.

The consequences of living inside this cauldron of violence against girls—and specifically girls who are not conceived of as people but as instruments subject to the wills of the men in their environs—cannot be overstated enough. Though the lasting effects of sexual trauma are well documented, there is the much larger question of all the ways in which girls slowly disappear from societal view as a result of the violence they experience, as well as the ways in which they are considered dirtied after the fact, rather than faultless victims deserving of justice, restitution, and, in a perfect national context, societally supported healing. Instead, young victims of sexual violence are frequently silenced, whether through active instructions not to speak of the atrocities to which they were subjected, or worse, by being married off to their abusers in a contrived attempt to protect the girl’s worth and erase the stain of her so-called defilement from the object that is her body.

Over my adolescence and teenage years, I left three after-school activities as a direct result of the sexualized attentions of men involved with those activities. In each moment, I saw these decisions as necessary, made each one alone, and do not recall having feelings about each instance of deciding to quit other than, “well, that’s that then.” But I am a woman from a family of privilege, and those decisions ultimately did not, in any significant way at least, arrest my progress toward the life I eventually made for myself. They shook my sense of safety in my world, though, and made me hypervigilant about what things I could do—whether after-school activities to enroll in or classes to sign up for. For each activity, I considered whether I stood even a slight chance of ending up a victim, and then, based on that calculation, decided not to undertake those things. That vigilance was its own form of disappearing from the world, insofar as it caused a notable retreat from wholehearted engagement with my surroundings and opportunities.

For so many girls in Malawi, though, their disappearance from society is magnitudes worse: it ends up becoming a total derailing from their lives’ original tracks. Girls regularly have to leave school after becoming impregnated by a schoolteacher, for example, or after being married off in their teen years in an attempt to alleviate their family’s poverty. The lost potential of so many girls is immeasurable, not just in their own lives but on the larger scale of the very shape of society. That we are effectively okay, as Malawians, with this state of affairs—insofar as this problem continues to insistently remain one—is frustrating, even painful, for myself as a woman now watching the next generation of girls growing up in our country. As I do so, I wonder how long they will be able to keep their beliefs in the great potentials of their lives before the inevitable point, still in their girlhoods, when a man they trust first strips that away from them.

When I was 14, a few months after I got my first period, my grandmother told me I could no longer “be playing with boys.” This was her euphemism for the necessity—now that I could get pregnant—of me taking defensive measures against potentially finding myself in trouble at the hands of a boy or man with dishonorable intentions. Her advice underscored the notion of making proper choices with respect to the company of men. Yet that talk would not have saved the 11-year-old rape victim in Chikwawa nor the 12-year-old rape victim in Nkhotakhota; in fact, it was given over a year after the day I donned all those absurd layers of clothing just to walk 10 minutes to my friend’s home. To presume choice as a factor in a girl’s victimization is to grotesquely place the burden of their protection on girls alone.

The persistent scourge of young girls’ sexual victimization cannot merely be seen as solvable through her own or her family’s powers of defense against her so-called defilement and subsequent devaluation. Our entire society must see this protection as important, and this importance must be baked into the institutions that keep our society standing—from healthcare, to education, to justice. Precious little will change otherwise—not until a critical mass of people stop colluding in conceiving of this violence as acceptable. 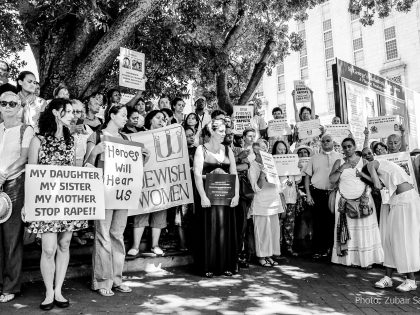