Sometimes called “Burundi’s Lumumba,” Prince Louis Rwagasore (1932–1961)—better known as Ludoviko or Rudoviko Rwagasore in his home country—has been one of the few political figures in modern Burundian history to be remembered fondly across ethnic and social lines. Rwagasore became Burundi’s first elected prime minister in 1961. Historian Christine Deslaurier asks, “How could such a distant prince, comparable to a Tutsi … resist … the political and military ethnicization, the multiparty system, and the emergence of a public space? How can Rwagasore still be magnified by the Burundians, a priori unanimously, when other heroes of African independence suffer the horrors of memory erosion or historical depreciation?”

African independence leaders such as Patrice Lumumba, Thomas Sankara, and Amílcar Cabral have been immortalized internationally in fictionalized and documentary films, stylized visages and icons, theater and literature, and art works across virtually all media. Rwagasore—in spite of popularity in his home country and his international connections to Julius Nyerere, Patrice Lumumba, and Gamal Abdel Nasser—has received only a fraction of such artistic appropriation, and his memory and legacy have been manufactured, utilized, lionized, and weaponized in equal measure through modern Burundi’s tumultuous political history.

Prince Rwagasore was a towering figure and certainly belonged to the league of Patrice Lumumba, Kwame Nkurumah [sic] and the like. Born of privilege (he was crown prince), he opted instead to champion the cause of the masses. He was a leftist and pursued policies of egalitarianism in a country that had deep-rooted class (some writers wrongly call the classes ethnic groups) system with the Tutsi pastoralists at the top, Hutu cultivators at the bottom and the hunter gatherers, the Twa, largely living on the margins of life.

Indeed, class conflicts between the Tutsi (historically the ruling minority) and the Hutu (the historical and present majority) have run through much of Burundi’s post-independence history, including civil wars in the 1970s and 1990s and the assassinations of several heads of state. Rwagasore’s party, the Union pour le Progrès National (UPRONA), formed in alliance with Hutu leader Paul Mirerekano, sought to mend class-ethnic conflict from the onset, and Rwagasore’s marriage to Marie-Rose Ntamikevyo, a Hutu, ostracized him from the royalty while reinforcing his commitment to the abolition of ethnic division.

His demotic approach to political coalition-building, his advocacy for Burundian self-sufficiency and worker co-operatives, and his increasingly forceful calls for independence prompted Belgian colonial authorities to issue a decree in 1960 prohibiting royalty from running for political office. Rwagasore was placed under house arrest for six weeks and UPRONA consequently lost the 1960 elections, but the intervention of the United Nations in 1961 to oversee new elections saw him elected as prime minister on September 18, 1961. Less than a month later, on October 13, Rwagasore was shot dead in Usumbura (now known as Bujumbura). Though the assassin was Greek national Jean Kageorgis, accompanied by Burundian members of the pro-Belgian Parti Démocratique Chrétien, Kageorgis himself accused Belgian colonial authorities of the murder a day before his own execution, and later historians and journalists such as Ludo de Witte and Guy Poppe drew upon recently unsealed archives to point to evidence of a Belgian conspiracy as well. (Burundi officially accused Belgium of the murder in 2018.) Rwagasore’s two daughters died under mysterious circumstances months after his assassination, and his wife died of poisoning in 1973. Since the death of Rwagasore, his memory and legacy as an anticolonial revolutionary has been co-opted and utilized by dominant political parties for the manufacturing of unity to ensure hegemonic control. Christine Deslaurier writes “his death was put at the service of a hegemonic UPRONA project that was very different from the one he had promoted during his lifetime. In his name, this party was able to claim a monopoly of power dominated by Tutsi elites who sabotaged his open and unitary vision of monarchical government, paving the way for an exclusive one-party regime.”

Banknotes with Rwagasore’s portrait were printed and diffused to the most rural corners of the country, October 13 was made a national holiday, and a mausoleum overlooking Bujumbura was financed by stamps bearing his visage. When Jean-Baptiste Bagaza—also from UPRONA—seized power in the 1976 coup d’état, his eleven-year presidency was marked by a distancing from Rwagasore: the October 13 holiday was abolished and the Jeunesse Révolutionnaire Rwagasore were replaced by the Union de la Jeunesse Révolutionnaire du Burundi. This flipped again after the 1987 coup d’état, in which UPRONA Major Pierre Buyoya became president from 1987-1993 and revitalized Rwagasore’s memory with the Institut Rwagasore and a call for renewed national unity.

So strong was the new UPRONA’s monopoly on Rwagasore’s memory that when the Front pour la Démocratie au Burundi (FRODEBU) came to power in 1993 after the country’s first multi-party presidential elections, Burundi’s first Hutu president, the progressive Melchior Ndadaye, did not attend the 1993 commemorations and instead sought to distance himself and his party from the UPRONA-ized Rwagasore cult. Ndadaye was assassinated by Tutsi soldiers three months after taking office, sparking the bloody Burundian Civil War (1993–2005). The war ended with the Arusha Accords mediated by Julius Nyerere, which saw the cementing of Rwagasore’s anticolonial legacy as the Accords invoked his name specifically, praising his “charismatic leadership” that eschewed ethnic conflict for peace and unity.

When the Arusha Accords clause prohibiting more than two consecutive presidential terms was broken by the controversial third presidential campaign of Pierre Nkurunziza in 2015, major unrest ensued following violent clashes between the military and anti-government protestors: some 1,700 civilians were killed, and hundreds of thousands more fled Burundi, creating a massive refugee crisis which is only now beginning to see repatriation. Although Nkurunziza went on to serve a third term, he forwent a fourth term run and ceded power to his party’s 2020 election candidate, incumbent president Évariste Ndayishimiye. In spite of the state-sanctioned commemorations of Rwagasore every year, the far-right Hutu supremacist ideology of the Conseil National Pour la Défense de la Démocratie – Forces pour la Défense de la Démocratie (CNDD–FDD), Burundi’s ruling party since 2005, shows that the commemorations are largely lip service no different from the pre-Civil War Rwagasore idolatry: lofty political rhetoric masquerading ongoing ethnic conflicts and tensions. Burundian writer David Gakunzi’s aptly titled “The ideological manipulation of Rwagasore’s legacy is unprecedented in Burundi” notes that “the objective of this ritualization of the figure of the prince [is]…to confer a certain legitimacy on the established powers,” drawing a parallel to Congolese dictator Mobutu Sese Seko’s caricatural lionization of Lumumba while murdering student protestors in Lubumbashi.

Nevertheless, the end of the civil war in 2005 and the inclusion of the Rwagasore in the Arusha Accords (which later served as the basis for the country’s constitution, promulgated on March 18, 2005) marked an end to the vacillation between cult-like adulation and repression of Rwagasore’s public memory in the more than three decades following Burundian independence, paving the way for artistic renderings of his legacy transcending the politicization and weaponization of years past.

Rwagasore: Vie, Combat, Espoir (2012), directed by French-German filmmaker and sound designer Pascal Capitolin and Burundian journalist and filmmaker Justine Bitagoye, was the first feature film to examine Rwagasore’s life and legacy. The film follows Burundian writer and journalist Roland Rugero who goes on a journey of historical discovery through archives and places as we learn about Rwagasore through historical footage and transcripts as well as interviews with his family, contemporaries, and historians. Capitolin stated “this film has been made as an answer of the request of having a film in Burundi that tells about Burundian history in a country that does not treat history since there’s no way of consensual understanding on history. Rwagasore is the only figure of the past where it has been possible to share history without too high dissent.” The film’s appraisal of Rwagasore’s rise to the independence struggle, his economic innovations in teaching farmers (alongside Paul Mirerekano) to form co-ops and grow crops to compete with the dominating Greek and Arab expatriate businessmen in Ruanda-Burundi, his short-lived term as prime minister, his assassination, and his legacy does a great service in de-obfuscating the highly politicized panegyrics echoed by the Burundian political establishment.

Singer-songwriters Jean Pierre Ngendanzi, Bernice the Bell, and Evode Ntahonankwa as well as the reggae band Lion Story have written and performed music as homages to Rwagasore, with lyrics such as “Ntiwashize imbere kuramba, washize imbere ukurama kw’u Burundi, mumwidegemvyo amahoro n’iterambere” (You [Rwagasore] chose Burundian stability, freedom, peace, and progress over your own life) and “Le prince Ludovico s’est sacrifié pour le Burundi, luttant pour le bon avenir des enfants du Burundi, et les régimes qui lui succédèrent la plupart se révélèrent despotiques” (Prince Ludovico sacrificed himself for Burundi, fighting for the good future of Burundi’s children, and the regimes that succeeded him, most of them proved despotic), showing a turn away from superficial hagiography to a broader reckoning of Rwagasore’s efforts in context with the history that followed his death. The sculptors Sylvestre Ngendakumana and Juma Pili are shown in Rwagasore: Vie, Combat, Espoir working on a bust of Rwagasore resembling the busts found in Bujumbura today, many of which were made in the decade following his death. More and more art forms are representing, appropriating, and rendering Rwagasore, expanding his image beyond Burundi and adding nuance to the highly politicized rendering of his image in the decades following his death.

In the end, it was the martyrological dimensions of its anti-colonialism that installed a consensus around [Rwagasore’s] mythical figure, more than his highly articulated political and social thought … The political myth is born in the crisis of society. … Ultimately, therefore, it is perhaps when the prince is no longer summoned by contemporary leaders solely for his unitary qualities that we can say that Burundi will be reconciled with itself.

And perhaps while the political class of Burundi has yet to achieve this reckoning, the artist community already has. 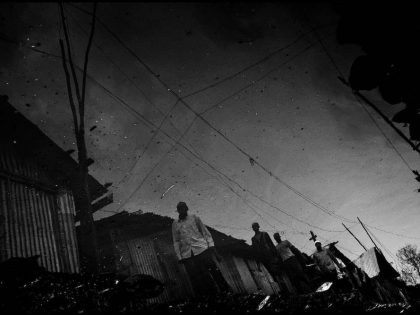 The media’s focus on the European “refugee crisis” obscures the fact the bulk of refugees are in camps in the Middle East, Africa and Asia.