In the eyes of many Americans, history is unassailable. Absolute. It is a sacred artifact—austere, static and detached from the tumult of everyday life.

Historians have a very different relationship to the record of the past. To them history means contestation, not preservation. In the public discourse, “revisionist history” is practically an epithet. But practitioners of history see reshaping and reinterpreting historical accounts as the highest duty of—and perhaps the ultimate rationale for—their craft.

Good history, like a good historian, is never inert. It is dynamic. Restive. Social upheaval is its author, not its adversary. History belongs in the scrum of politics because historical narratives are not merely truth claims; they are assertions of power.

Which brings us to the matter of falling monuments. The current upsurge of struggle has reenergized the Black Lives Matter theme and reinvigorated efforts to remove statues, flags, and other iconography associated with racism, enslavement, and genocide. From Birmingham to Boston to Chicago to Montgomery to Nashville, to say nothing of overseas sites such as the British city of Bristol, protesters have dethroned, decapitated, defaced or otherwise targeted public representations of some of the most venerable members (deceased) of the Great White Canon of Conquest.

Critics often describe such campaigns as attempts to erase history. That outlook generally reflects an entrenched commitment to the defense of racial hierarchy. Yet it also reveals an impoverished understanding of the historical enterprise itself.

By attacking statues and other emblems of oppression, the demonstrators are fashioning a vernacular counter-history from the depths of alienation and exploitation. They are renouncing the cultural edifice of domination. They are reclaiming history. And in so doing, they may help stimulate a greater intellectual and social awakening.

The spectacle of tumbling monuments recalls other historical episodes in which hated sculptures fell. Through the ages, the toppling of statues has accompanied the overthrow of tyrants. But by practicing an emancipatory philosophy of history, Black Lives Matter activists and others (the latest onslaught on dubious monuments has spread to Native American communities and beyond) are in some ways evoking a rather specific moment of rupture—one rarely imagined, these days, as an analogue to Western experience. Here I have in mind the era of global decolonization.

Today’s street protesters are hardly seeking formal self-government, as were the “third world” insurgents of the 20th century. One must be cautious when deploying colonial metaphors. The current uprisings, however, exemplify a cardinal principle of post-World War II anticolonial movements; namely that political revolt requires a corresponding rebellion in the realm of the mind.

The most influential anticolonial thinkers of their day affirmed this idea. Frantz Fanon, a theorist of the Algerian liberation struggle, maintained that the colonized must regurgitate the ruling myths of the colonizer. By severing colonialism’s material and psychological bonds, he wrote, subalterns reorder “native social forms” and begin to embody a history of their own design. Amilcar Cabral, a West African revolutionary, believed the mental rehabilitation of subject people occurs on the terrain of historical consciousness. He argued that victims of foreign occupation “reenter history” only when they disavow imperialist visions of the past.

In a sense, recent Black Lives Matter mobilizations exhibit a decolonial ethic. The explicit targets of protest are police terror, vigilante violence, and the public emblems of racial subjugation. Yet the uprisings pose a far deeper threat to the status quo. By defying the reigning ideological apparatus, the demonstrations are producing an alternative framework of knowledge. They offer a means of breaking psychologically from the old regime and reconstructing popular consciousness.

The protestors are confronting not only political opposition and police repression, but also a cognitive empire designed to smother critical awareness. As every student of neoliberalism knows, modern capitalism rules by recasting human experience as an endless series of market exchanges. Even the alleged mechanisms of democratic inclusion, from electoral politics to the Internet, aid in the management of collective thought and perception.

The US corporate-political class relies on a continuous loop of propaganda to narcotize its subjects and convert them into supplicants who willingly accept permanent war and obscene racial and economic inequities. The theorist Sheldon Wolin called this process of mass conditioning “inverted totalitarianism,” but we might also understand it as a quasi-colonial system of psychological domination.

Mass struggle disrupts that cycle of control. It can help purge imposed values and inspire a collective repudiation of the lies of the dominant order. Once those illusions begin to crumble, the entire system totters. If ordinary people discover that police are unnecessary, or that they (the cops) serve on behalf of the propertied and the powerful, or that a mobilized group of militants can remake society in the streets, then they are apt to question other arrangements as well. They may lose their tolerance for degradation. They may resist the equation of freedom and private consumption. They may reject the notion of an economy, indeed, a democracy, predicated on desperation, debt, punishment, and war.

It may not be inaccurate to view Black Lives Matter as a mode of confrontation politics, based on ideals of radical humanism, that entails a kind of mental decolonization. When all is said and done, police murders may not cease. But another generation of dissidents will reclaim agency and intellectual sovereignty. As long as popular agitation continues, elites will find it more difficult to manipulate the masses and enforce their own version of reality.

Of course, street campaigns have their limitations. The recent antiracist upheavals fall well short of revolutionary events. Nor have most of the protests been overtly antisystemic. Stunned by the breadth and ferocity of the early insurrections, the US corporate and political establishments have scrambled to regain the balance of power and restore the veneer of legitimacy. Their attempts to bureaucratize, coopt, and commodify the antiracist revolt suggest that aspects of the movement remain open to bourgeois capture.

Here, again, anticolonial theory is relevant. During a 1972 visit to the US at the height of the Black Power movement, Amílcar Cabral, leader of the Guinea-Bissau and Cape Verdean struggle, urged African Americans to address the underlying causes—and not merely the symptoms—of racial oppression. “If a bandit comes to my house and I have a gun,” he told a gathering of black activists in New York City, “I cannot shoot the shadow of the bandit; I have to shoot the bandit. Many people lose energy and effort, and make sacrifices combating shadows. We have to combat the material reality that produces the shadow.”

The assertions of Cabral, who was assassinated in 1973, helped clarify the political task of contemporary African American radicals. At the time, the Nixon administration had joined some African American figures in attempting to redefine Black Power as “black capitalism.” Members of the black American left, however, rejected such machinations. Instead they strove to deepen the anticapitalist elements of the domestic freedom movement by demonstrating that the multinational banks and corporations that perpetuated colonial arrangements abroad also presided over the economic marginalization of black communities at home.

Today antiracist organizers face a similar test: they must combat the material realities of oppression while avoiding a dangerous preoccupation with its secondary manifestations. Symbols are important; they can shape consciousness and order people’s lives. But activists cannot allow their struggles to be confined to the arena of symbolic reform.

The decision of Quaker Oats to rebrand their “Aunt Jemima” syrup; the proliferation of “Black Lives Matter” street murals and lawn signs; and the withdrawal of white actors who voice nonwhite characters in animated series all represent the silhouettes but not the substance of change. Such rituals of racial enlightenment are not merely superficial; they are signs of a system attempting to regain control. Faced with a virtually unprecedented eruption of popular dissent, NGOs, corporate executives, and other administrators are hoping to replace the old frameworks of power with more refined patterns of domination. A generation of freedom fighters once called this style of management “neocolonialism.”

Whether insurgent forces within Black Lives Matter can resist such schemes and expand the mass rebellion remains uncertain. Police defunding as a fundamental challenge to state violence (rather than as a mere budgetary adjustment) seems essential to any meaningful program of transformation. Yet even more dramatic campaigns may also materialize. The tides of antiracist protest have already mingled with wider currents of economic and social unrest. The George Floyd uprisings would not have been as widespread or prolonged had they not arisen against a backdrop of wildcat strikes and grassroots agitation intensified by COVID-19 and spiraling precarity.

If these and other tendencies continue to interact, the result could be a more sustained insurrection of the vulnerable, the exploited, and the abandoned. Battles against punitive policing and white supremacy could infuse and bolster demands for economic redistribution, unionization, immigrant justice, ecological repair, LGBTQ rights, the dismantling of mass incarceration, and the restoration of indigenous lands. (For Native Americans, it must be said, colonialism is not an evocative metaphor but a devastating historical reality.)

Racial terror is a patent violation of human dignity and has rightfully become the nucleus of modern protest. But it is also deeply enmeshed with the routine forms of violence produced by austerity and capitalist retrenchment.

Decolonization may be a useful analogy for the latest Black Lives Matter counteroffensives because the struggles that emanated from Minneapolis in late May are both epic and, as they stand, incapable of transferring to the dispossessed masses genuine wealth and power. The drama of Third World independence, one must recall, never fulfilled the radical promise of socialist transformation. Nor can toppling a statue reconfigure the political economy that continues to render entire populations disposable.

Yet the form and character of rebellion remain as fluid today as they were in the heyday of the anticolonial crusades. As they grapple with existing relations of power, more George Floyd demonstrators will undergo the revolutionary process that Cabral described as “a reconversion of minds.” They will discard the prevailing mythologies and inaugurate a politics commensurate with the crises of our time. Dedicated to truth over tradition, they will craft new pedagogies, rewrite master narratives and reinhabit the stage of history.

For this group, politics is often framed as a series of never-ending discussions about social justice: The experience from South Africa. 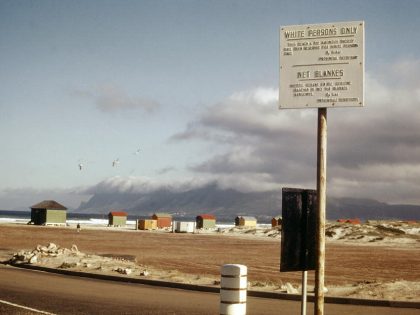 Paralyzed with Fear of the Past

J.M. Coetzee wondered in the late 1980s what price white South Africans are willing to pay for fraternity with Black South Africans.