It has been a tragic year. We have lost so many people. A month ago, Annar Cassam also left us. She passed away in relative obscurity far away from her home country of Tanzania. Adarsh Nayar, the personal photographer of the first president of Tanzania, was the first one to break the sad news on social media. “REGRET informing my friends and colleagues Mwalimu Nyerere’s personal assistant Annar Cassam,” he posted on Facebook, “seen here speaking with him, passed away at 05.00 am this morning in Geneva, Switzerland, after a long illness.” In that photo (reproduced below with permission) one gets a glimpse of the extent in which she was not then obscured in the Tanzanian political scenery. “Annar, who was in regular touch with me,” Adarsh recalls, “had moved to Geneva after Mwalimu’s retirement in October 1985 and worked for the United Nations.” Yet so little is known, especially among my generation, about this daughter of Tanzania.

There are at least five reasons for this obscurity. First, the most widely known assistant of Mwalimu Nyerere is the late Joan Wicken. Second, Annar was expected to keep a very low profile during her years in the state house. Third, some people tend to confuse her name with that of the relatively renowned Al Noor Kassum. Fourth, our national historiography still suffers from what Mohamed Said, following Dossa Aziz, refers to as a position in which Tanzania is a country without heroes and heroines. By this, they mean there has been a deliberate dearth of historical narratives of some of those who contributed dearly to the struggle for independence and nation building. In line with this, the fifth reason is that Annar did not write much about herself and, in a way, spent most of her time ensuring the legacy of Mwalimu lives on. Yet his legacy was also hers.

It was while she was a student at the London School of Economics (LSE), Annar told me, that she “first saw and heard Mwalimu” who “used always to find time to meet us students during his frequent trips to London in the 60s.” After specializing in international law, she went on to Geneva on a fellowship at the International Commission of Jurists. While there, she met freedom fighters for the first time. They were from the South West Africa People’s Organisation (SWAPO). Consequently, her first treatise there was on the illegality in international law of the then apartheid South Africa’s occupation of South West Africa (as Namibia was then called). It is thus not surprising that she was asked to come back home to work at Foreign Affairs in the 1970s. At that time Dar es Salaam was the headquarters of the African Liberation Committee (ALC) and Tanzania was instrumental in supporting Southern African Liberation Movements. Tanzania’s foreign policy prioritized this role as it was a cornerstone of Nyerere’s presidency. With her expertise, she ended up working closely with him at State House. One of her jobs as Mwalimu’s assistant, recalls Adarsh, was to help him with translations of all French correspondence, and also be with the President when he was meeting French speaking leaders. She therefore experienced, at close range, Nyerere’s role in Africa’s liberation. 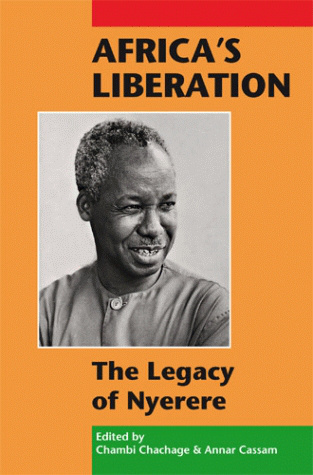 Annar’s ardent concern for setting the record straight about that legacy is partly what led us to our e-meeting. It all started when Firoze Manji, then editor-in-chief of Pambazuka News and Pambazuka Press, invited me in late 2009 to be a guest editor for a special issue of Pambazuka News to commemorate Mwalimu Nyerere on the 10th anniversary of his death. He then e-introduced me to Annar who was eager to share some unpublished articles with us, and was also willing to write an article aptly entitled Nyerere on Nyerere. That was the beginning of a decade long friendship in which I learned so much from her about Tanzania and Africa.

One of the outcomes of this was the publication of our co-edited book on Africa’s Liberation: The Legacy of Nyerere. No one captures the process of publishing it as succinctly as her. “Dear Chambi,” she wrote, “as your other half in this exercise, as your absent other half, to be precise, I can rely on you to transmit my heartfelt regrets for not being in Dar tonight to celebrate the launching of our book of tributes to Mwalimu on this day, April 13th, his birthday.” So began a heartfelt letter that she asked me to read publicly at Nkrumah Hall in 2010 during the book launch. “As the editor of Pambazuka Press will tell you,” her letter continued, “this entire project started with my email to him of August 2009 to consider publishing a special issue of Pambazuka News in October 2009 in order to remember and celebrate Mwalimu ten years after he left us.”

Until then I had no idea that she was the one who initiated it, itself a testament of how easily we can write out someone from history. After crediting the publishing team, she then wrote:

Through you, I would like to thank the Dar-based authors for their contributions which, by some strange alchemy, have come together to provide coherence and weight to this book despite the fact that it was compiled, edited and published across the oceans, between Dar, Geneva and Oxford. This is surely an example of minds meeting across distances!

So often have I wondered why I didn’t know about Annar before. What excuse did I have as a scholar of Africa in general and Tanzania in particular? None. Her name appears in the archives that I accessed years later during my PhD fieldwork. Karim Hirji’s debate with Annar published on Udadisi blog in 2011, for instance, also hints at her role in engaging with students at the University of Dar es Salaam during its heydays of revolutionary scholarship. “My fellow editor of Cheche, Henry Mapolu, and I,” Hirji recalls, “had two meetings with Annar Cassam in those days.” He notes that Annar “came as a representative of Mwalimu (she was one of his assistants).”

Even after reading this tribute to Annar, you may still ask who was she? Why should we know more about her? All I can say is that it is because she was a living library and part of the institutional memory of our country. Take, for instance, the article she wrote about Kiswahili. “During my career at the United Nations Organization for Education, Science and Culture (UNESCO) in Paris,” she notes therein, “I had the opportunity to follow the literacy-language story from an international angle and so I offer these comments by way of history and context.” After sharing how the success of Tanzania’s literacy programs for schoolchildren and adults during the Mwalimu years (mid 1960s-mid 1980s) aroused great interest and respect at UNESCO, both among the member states and within the Education Sector in the Secretariat, she commends our lingua franca:

It was obvious to literacy experts from around the world that the fact that these programs were carried out in Kiswahili was a major reason for the success. The advantage of teaching any subject, above all literacy and numeracy, in the language already spoken and understood by students and teachers was clear. This perception led to the design and promotion of mother-tongue methodologies as these provided the fast track to achieving literacy. Of course, in the case of Tanzania, Kiswahili was not strictly speaking the unique mother tongue, but it was as good as any because it was used in schools and was the national and official language of the country’s adults.

Her passion was for us to write our own history. When I told Annar in 2015 that I was writing a chapter on Mwalimu Nyerere as a Global Conscience, she generously offered to ship me her papers on the subject and related matters. Unfortunately, due to an unforeseen event, she wasn’t able to do so. She still managed to offer constructive comments and edits on my draft chapter, affirming that what I was “recounting in this piece is pure factual history as it happened.” In her public letter, referred to earlier, Annar also called for a publication that I am now told has been in the pipeline:

My gratitude goes to our brother Salim for honoring the occasion with his chairmanship, together with my ardent hope that he too will publish the record of his long years of close collaboration with Mwalimu. Salim Ahmed Salim was his trusted Prime Minister, Defense Minister, Foreign Minister, UN Permanent Representative and Ambassador—his first post was as Ambassador to Nasser’s Egypt at the age of 21. No one else holds such a lengthy and privileged place in the history of Nyerere’s Tanzania and we look forward to reading his account of this unique experience.

The same quest permeated her gratitude to another guest who graced our book launch. “I am delighted”, she wrote,” that the Guest of Honour is our most distinguished comrade and poet, Marcelino Dos Santos, who has agreed personally to launch this very modest salute to Mwalimu’s legacy of liberation.” He was a leading freedom fighter in Mozambique’s Frente de Libertacao de Mocambique (FRELIMO). “We could not have asked for a more appropriate witness on this occasion,” intimated Annar, “for it is Frelimo’s struggles—and victories—that have touched the lives of more Tanzanians more intimately than any other.” She concluded by stating: “Here also, there is a story that needs to be told, if I may say so.” She would be so proud that Azaria Mbughuni is writing a book on Tanzania and the liberation struggle in Southern Africa.

It is my hope her niece, Laila Manji; friends, Anna Pouyat, Walter Bgoya and Mahmood Mamdani, and co-authors of the recently published Development as Rebellion: A Biography of Julius Nyerere—Issa Shivji, Saida Yahya-Othman, and Ng’wanza Kamata—will make publicly available Annar’s archival materials for posterity. As Laila aptly puts it, these papers are her careful notes and memories of Mwalimu’s extraordinary legacy. May they, together with Annar’s brother, Mohamed Cassam, and their friends, relatives, and compatriots find comfort in what Laila refers to as “her spirit, her contribution, and her commitment to our common humanity and our Tanzanian heritage.”

Although Annar and I only met once, geographical boundaries did not stop us from furthering such goals. One of the lessons I learned from her is the importance of not mincing words and not refraining from challenging the ideas of others, especially when they depart from historical facts. She once told me: “Thanks to Pambazuka, I have the luxury of writing what I want outside the mainstream mental habits but always with the essentials in mind, essentials which I learnt under Mwalimu which remain pertinent, for me.” It was indeed an honor and a privilege to collaborate with someone who christened herself my “old/aged shangazi” (aunt). Fare thee well my dear shangazi.