Already some people are talking about “post-COVID-19.” And why should they not? Even if, for most of us, especially those in parts of the world where health care systems have been devastated by years of organized neglect, the worst is yet to come. With no hospital beds, no respirators, no mass testing, no masks nor disinfectants nor arrangements for placing those who are infected in quarantine, unfortunately, many will not pass through the eye of the needle.

It is one thing to worry about the death of others in a distant land and quite another to suddenly become aware of one’s own putrescence, to be forced to live intimately with one’s own death, contemplating it as a real possibility. Such is, for many, the terror triggered by confinement: having to finally answer for one’s own life, to one’s own name.

We must answer here and now for our life on Earth with others (including viruses) and our shared fate. Such is the injunction this pathogenic period addresses to humankind. It is pathogenic, but also the catabolic period par excellence, with the decomposition of bodies, the sorting and expulsion of all sorts of human waste—the “great separation” and great confinement caused by the stunning spread of the virus—and along with it, the widespread digitization of the world.

Try as we might to rid ourselves of it, in the end everything brings us back to the body. We tried to graft it onto other media, to turn it into an object body, a machine body, a digital body, an ontophanic body. It returns to us now as a horrifying, giant mandible, a vehicle for contamination, a vector for pollen, spores, and mold.

Knowing that we do not face this ordeal alone, that many will not escape it, is vain comfort. For we have never learned to live with all living species, have never really worried about the damage we as humans wreak on the lungs of the earth and on its body. Thus, we have never learned how to die. With the advent of the New World and, several centuries later, the appearance of the “industrialized races,” we essentially chose to delegate our death to others, to make a great sacrificial repast of existence itself via a kind of ontological vicariate.

Soon, it will no longer be possible to delegate one’s death to others. It will no longer be possible for that person to die in our place. Not only will we be condemned to assume our own demise, unmediated, but farewells will be few and far between. The hour of autophagy is upon us and, with it, the death of community, as there is no community worthy of its name in which saying one’s last farewell, that is, remembering the living at the moment of death, becomes impossible.

There is no doubt that the skies are closing in. Caught in the stranglehold of injustice and inequality, much of humanity is threatened by a great chokehold as the sense that our world is in a state of reprieve spreads far and wide.

If, in these circumstances, a day after comes, it cannot come at the expense of some, always the same ones, as in the Ancienne Économie – the economy that preceded this revolution. It must necessarily be a day for all the inhabitants of Earth, without distinction as to species, race, sex, citizenship, religion, or other differentiating marker. In other words, a day after will come but only with a giant rupture, the result of radical imagination.

Papering over the cracks simply won’t do. Deep in the heart of this crater, literally everything must be reinvented, starting with the social. Once working, shopping, keeping up with the news and keeping in touch, nurturing and preserving connections, talking to one another and sharing, drinking together, worshiping and organizing funerals begins to take place solely across the interface of screens, it is time to acknowledge that on all sides we are surrounded by rings of fire. To a great extent, the digital is the new gaping hole exploding Earth. Simultaneously a trench, a tunnel, a moonscape, it is the bunker where men and women are all invited to hide away, in isolation.

They say that through the digital, the body of flesh and bones, the physical and mortal body, will be freed of its weight and inertia. At the end of this transfiguration, it will eventually be able to move through the looking glass, cut away from biological corruption and restituted to a synthetic universe of flux. But this is an illusion, for just as there is no humanity without bodies, likewise, humanity will never know freedom alone, outside of society and community, and never can freedom come at the expense of the biosphere.

We must start afresh. To survive, we must return to all living things—including the biosphere—the space and energy they need. In its dank underbelly, modernity has been an interminable war on life. And it is far from over. One of the primary modes of this war, leading straight to the impoverishment of the world and to the desiccation of entire swathes of the planet, is the subjection to the digital.

In the aftermath of this calamity there is a danger that rather than offering sanctuary to all living species, sadly the world will enter a new period of tension and brutality. In terms of geopolitics, the logic of power and might will continue to dominate. For lack of a common infrastructure, a vicious partitioning of the globe will intensify, and the dividing lines will become even more entrenched. Many states will seek to fortify their borders in the hope of protecting themselves from the outside. They will also seek to conceal the constitutive violence that they continue to habitually direct at the most vulnerable. Life behind screens and in gated communities will become the norm.

In Africa especially, but in many places in the Global South, energy-intensive extraction, agricultural expansion, predatory sales of land and destruction of forests will continue unabated. The powering and cooling of computer chips and supercomputers depends on it. The purveying and supplying of the resources and energy necessary for the global computing infrastructure will require further restrictions on human mobility. Keeping the world at a distance will become the norm so as to keep risks of all kinds on the outside. But because it does not address our ecological precariousness, this catabolic vision of the world, inspired by theories of immunization and contagion, does little to break out of the planetary impasse in which we find ourselves.

All these wars on life begin by taking away breath. Likewise, as it impedes breathing and blocks the resuscitation of human bodies and tissues, COVID-19 shares this same tendency. After all, what is the purpose of breathing if not the absorption of oxygen and release of carbon dioxide in a dynamic exchange between blood and tissues? But at the rate that life on Earth is going, and given what remains of the wealth of the planet, how far away are we really from the time when there will be more carbon dioxide than oxygen to breathe?

Before this virus, humanity was already threatened with suffocation. If war there must be, it cannot so much be against a specific virus as against everything that condemns the majority of humankind to a premature cessation of breathing, everything that fundamentally attacks the respiratory tract, everything that, in the long reign of capitalism, has constrained entire segments of the world population, entire races, to a difficult, panting breath and life of oppression. To come through this constriction would mean that we conceive of breathing beyond its purely biological aspect, and instead as that which we hold in-common, that which, by definition, eludes all calculation. By which I mean, the universal right to breath.

As that which is both ungrounded and our common ground, the universal right to breath is unquantifiable and cannot be appropriated. From a universal perspective, not only is it the right of every member of humankind, but of all life. It must therefore be understood as a fundamental right to existence. Consequently, it cannot be confiscated and thereby eludes all sovereignty, symbolizing the sovereign principle par excellence. Moreover, it is an originary right to living on Earth, a right that belongs to the universal community of earthly inhabitants, human and other.

The case has been pressed already a thousand times. We recite the charges eyes shut. Whether it is the destruction of the biosphere, the take-over of minds by technoscience, the criminalizing of resistance, repeated attacks on reason, generalized cretinization or the rise of determinisms (genetic, neuronal, biological, environmental), the dangers faced by humanity are increasingly existential.

Of all these dangers, the greatest is that all forms of life will be rendered impossible. Between those who dream of uploading our conscience to machines and those who are sure that the next mutation of our species lies in freeing ourselves from our biological husk, there’s little difference. The eugenicist temptation has not dissipated. Far from it, in fact, since it is at the root of recent advances in science and technology.

At this juncture, this sudden arrest arrives, an interruption not of history but of something that still eludes our grasp. Since it was imposed upon us, this cessation derives not from our will. In many respects, it is simultaneously unforeseen and unpredictable. Yet what we need is a voluntary cessation, a conscious and fully consensual interruption. Without which there will be no tomorrow. Without which nothing will exist but an endless series of unforeseen events.

If, indeed, COVID-19 is the spectacular expression of the planetary impasse in which humanity finds itself today, then it is a matter of no less than reconstructing a habitable Earth to give all of us the breath of life. We must reclaim the lungs of our world with a view to forging new ground. Humankind and biosphere are one. Alone, humanity has no future. Are we capable of rediscovering that each of us belongs to the same species, that we have an indivisible bond with all life? Perhaps that is the question—the very last—before we draw our last dying breath. 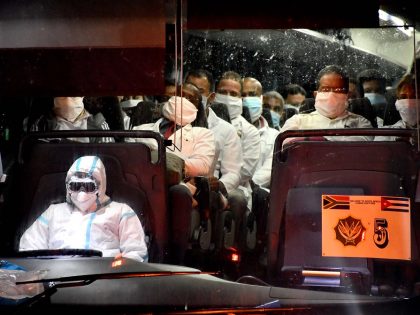 Can a virus accelerate change in Africa?

African intellectuals are calling for a different discussion. Isn’t this the right time to propel changes that have often been postponed?

Africa and the Future

An interview with Achille Mbembe, including on the consequences of global capitalism on the continent.