Whenever I see news stories of all the people who continue to live their lives as though nothing in America has changed, I find that I can’t perceive them exactly as they are in that moment. Faces sunburnt from the beaches they found suddenly cheap tickets to; hugging their roommates and friends as they teeter down the street; unsteady on their feet after several hours at a crowded bar. Instead I see funerals. Not necessarily theirs, but funerals nonetheless—the red in their cheeks no longer sunburn, but flushed from emotion in the post-ceremony receiving line; their hugs not of happiness but of sympathy; their unsteadiness not from a steady stream of margaritas but from the imminent possibility of collapsing beside the casket. Try as I might to have compassion for what drives people to deny the truth of the reality around them, I haven’t been able to find it.

Yet how would they know what disaster is like, unless they have lived it? My mother tells me that when our family first returned to our home country of Malawi after living in the US and then Canada for nearly 13 years, my siblings and I—all of us born and raised in North America until 1994—would dependably ask, whenever she left for funerals, how old the person was who had died. In our minds, she explained, only old people died, and infrequently so, because that’s what we had known in our American and Canadian childhoods—the deaths of our friends’ grandparents, great-aunts, church elders, and senior citizen neighbors. In this new life we were in, though, death seemed to happen all the time, and to anyone—a young aunt, a baby cousin, a middle-aged employee at my father’s office. Whether from AIDS, cancer, or just the woeful inadequacies of a barren post-authoritarian healthcare system, death in Malawi felt ubiquitous and indiscriminate. My mother says that one day as she was leaving for a funeral about a year after we’d returned to Malawi, she noticed we hadn’t asked the age of the person who had died; that was when she knew we finally understood where we were. The rules of death, for us, had changed.

Only contextual experience can sow the knowledge of the rules of how people die into one’s spirit; only novel contextual experience can change one’s internal understanding of those rules. Everything before that point is speculation, however well-informed. Even for those of us who have heeded the warnings of multiple doctors-cum-social-activists and boarded ourselves into our homes—I am currently writing from a small one-bedroom apartment in West Philadelphia—the trepidation we feel is not so much from the deaths that are already here, but from what we know is coming. What we fear from behind our sealed windows and obsessively refreshed social media timelines is not the lived reality we know, but the specter of a future that we don’t. But it is hard to maintain the fear of an immaterial thing indefinitely, and I find sometimes that even for me—a person from a country where funerals are so normalized that a “culture of death,” as my father used to call it, has irrevocably shaped our language and ways of life—the inevitable arrival of a new reality can start to feel almost tiresomely unreal.

My father hated the idea of his children at funerals, and so he forbade our attendance at them. He felt they were too traumatic; the fact that the person had died, he believed, was plenty disruptive enough. I only went to my first funeral in Malawi in 2012, the year I turned 28. To the extent that I use the phrase “we’ve already been to too many funerals,” then, is my imagining of myself with my family at those funerals rather than actually being there, putting together the picture of what happened from the stories my parents and cousins tell me afterward: a form of historical speculation. Until recently all the losses I had been informed of, but not seen in their finalized forms, had maintained a certain unreality about them—as though it had just been a very long time since I had last seen my loved ones. If I didn’t see them buried, they weren’t really gone.

But that, of course, is a fallacy, wrought of the same illogic that drives so many people to continue with their lives as though nothing has changed except that they can’t go out for dinner anymore. For even though I didn’t attend many funerals, the weight of those losses is nonetheless real. The holes in our family fabric are real, the absences at family weddings and holiday celebrations so glaring that the presence of the departed feels almost perceptible. And because of the weight of what I have lost, I intuitively feel the cost of my actions in my still-unfolding American future; knowing this I can, and do, refuse to be a factor in the adding of this kind of a weight to someone else’s life.

As I watched my father’s own casket be lowered into the ground behind his parents’ home in Dedza, Malawi, a rainy day two Novembers ago, I realized he had been right all those years before about the trauma of that moment. That it was one thing to know in your heart that someone was dead, but another thing entirely to watch them disappear into the dust while a choir sang them home. Though I mostly want for the people still living their normal lives to know the cost of that choice, a part of me envies their levity, is glad for the absence of such dark gravity in their lives. The day will soon enough arrive when the twin realities of hospital capacity and funeral home availability will change that. For death’s new rules in these American lives, the indiscriminate rules of an incurable virus, will irrevocably and brutally change us all. 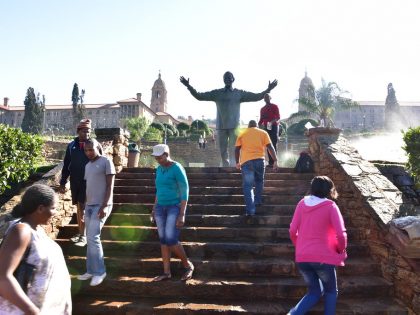