For Arnaud Esquerre, noteworthy sociologist at EHESS (Paris), “the living have changed their relationship to human remains in an unprecedented way.” It is undoubtedly through this notion that I was inspired to embark upon a dangerous but exciting investigation into the heart of Gabonese political power, by meddling in the shadowy world of sorcery. My years-long investigations have resulted in the observation that each time our country has approached political elections, tombs have been systematically desecrated and pillaged. For instance, as early as October 10, 2006, the government daily L’Union reported more than forty tombs looted at the well-known Mindoubé cemetery.

Six years later, on November 2, 2012, the cemetery of Mindoubé welcomed the public. Family members of the deceased came for the traditional cleaning of the tombs or just to “pass the time” with the dead, as we say in Libreville. It is the sign of a society which has not distanced itself from death, as in many post-mortal western societies. In Gabon, All Saints’ Day is an important day during which Christians of all denominations commemorate both the saints and the deceased. Of Catholic origins, this celebration is characterized by requiem masses and the cleaning of graves. It is a moment of communion with the departed and showcases the privileged place of the dead in the social life of the living.

On this particular Friday, however, brawls and cries of indignation erupted into the torpid Libreville smog. The reason for this anger was that some places in the cemetery had been rendered inaccessible by lack of maintenance, open sewage, and the collapse of fencing. Indeed, most of the cemeteries in Libreville remain in a state of extreme neglect and are sometimes closed to the public. Some graves are literally buried in tall grass. Or, the family discovers that due to lack of space, several dead people were buried in the same plot, a common practice in Libreville where there is often talk of such “elevator” burials.

Even worse, relatives realize that graves have been desecrated. A few meters from the entrance to the cemetery, an area favored by grave robbers, Mr. Mba (whose real name remains anonymous) discovered that his sister’s resting place was smashed and looted. And, most importantly, his sister’s grave was completely emptied of its contents.

According to my own field survey, more than one hundred and fifty graves were emptied of their contents in Mindoubé between 2009-2012. I knew this because as part of my direct participation, I worked with local women volunteering to clear the cemetery’s trash and helped the guardian to shut opened graves—an ungrateful task given the sheer weight of the concrete. I also conducted several interviews with municipal officials. The indifference of these public authorities contrasted with the anger, indignation and frustration of the relatives of the deceased on the scene.

Yet the theft of the dead is not a taboo issue in Gabon. On the contrary, it is a social phenomenon that continues to make headlines in newspapers and features frequently as a subject of kongossa (rumor) in Libreville. Politicians, senators, deputies, ministers and other officials are generally accused of being involved. On April 28-29, 2012, Jonas Moulenda penned an article for L’Union titled “Five Human Skulls Discovered in a Cabin;” while on January 3, 2013, the bi-monthly news and analysis periodical, La Nation, implicated Pierre Claver Maganga Moussavou (recently removed as Vice President by Ali Bongo) of ritual crimes. Then in 2012, Gabriel Ekomy, a senator from the Estuary, was openly accused of pillaging graves, though he avoided the fate of Jean Ondeno Rebieno, a popular singer arrested in 2008 for the same act. More recently in 2015, Rigobert Ikhamboyat Ndeka, a Parti Démocratique Gabonais (PDG) deputy from Ogooué-Ivindo, was publicly cited for his involvement in the same scandal.

In this economy of the body, magic and politics, the cemeteries in Libreville and the rest of Gabon feed the occult market of human remains, all of which is evident to this day for those willing to look. The cities’ untamed graveyards have become sites of extraction of an exceptional “raw material” that we call “white gold,” nodes within a vast network of body parts where value is measured by the potential for magic and therapy.

The theft of bodies and the desecration of graves are just a few elements, which betray the true nature of the political system put in place by the Bongo-PDG tandem, in place for 51 years. In both symbolism and reality, it is a regime which uses the body (dead and alive) to live. It is a necrophagous political system that does not hesitate to draw its vital force in death, even as death and paralysis threaten the system’s leading beneficiaries. In a very real sense, one can say that the biopower theorized by Foucault and others is embodied in the methods and idiosyncrasies of Gabonese political power. 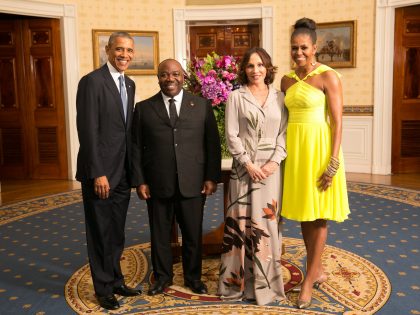 The paradoxes of soft dictatorship

The longevity of the Gabonese political system also lies in the many channels of redistribution that connect politicians (known colloquially as “les Grands”) to ordinary citizens. 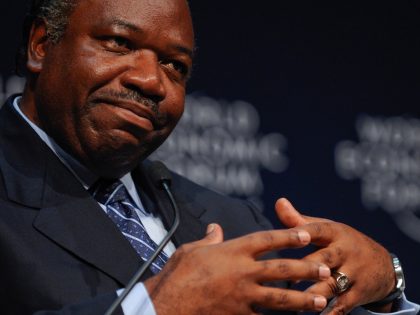 Gabon’s unsavory Life President came to visit the US. Probably to discuss oil deals. He became collatoral damage in the US right’s media war against Barack Obama. So less time to focus on Bongo. So a win for him then.