With growing technological advances, more countries are being propelled to implement data privacy and protection measures. But such laws may not offer comfort in countries like Ethiopia and Zimbabwe, where there is little institutional will and capacity to protect privacy and means to enforce the rule of law.

Current research explores how data privacy legislation across the globe is rising in popularity; however, hardly anyone discusses the inadequacy of legal instruments. Though the problem of ensuring privacy of personal data is greater than simply whether data privacy laws exist, the capacity to enforce and protect those rights is crucial in the quest for human rights and dignity.

Meanwhile a techno-dystopian future is an encroaching possibility, where internet controls and surveillance technology reach unregulated extremes. The 2011 internment of Uighur Muslims in Xinjiang, a province in northwest China, foreshadows the impact of facial recognition technology and other apparatuses which facilitate surveillance programs that track everything about everyone at all times.

Western mainstream media has explored the vastly expanding domestic surveillance architecture in China, but has mostly ignored its growing global footprint in Africa. African states, including Zimbabwe, Kenya, and Zambia, with the support of the Chinese state, are following the Chinese Communist Party’s (CCP) efforts to unbridled data collection, which is threatening traditional conceptions of privacy. For instance, the Zimbabwean government, with the help of ClouldWalk Technology, a Guangzhou-based start-up, is providing mass facial recognition programs. The agreement between the government and CloudWalk is part of the Belt and Road Initiative (BRI), a comprehensive plan to promote infrastructure development across Africa, Asia, and Europe with Chinese financial aid. These programs capture personal data to engender one of the world’s most sophisticated and racially diversified facial recognition databases.

Zimbabwe’s control of online and offline spaces is largely based on Japanese and Chinese support. Admittedly, the Zimbabwean ministry of communication has maintained that the technologies garnered from foreign suppliers are used for digital forensics and facial recognition systems. These systems, and accrued data, empower the state to control communication devices for crime prevention, and ultimately advance the state’s cybersecurity and law enforcement aims.

Worry accompanies these advances. Firstly, Zimbabwe may be giving away citizens’ private data to an unaccountable Chinese tech firm. Secondly, activists, technology experts and academics underscore how these tools may help Zimbabwe’s government crackdown on political dissidents. Relatedly, trepidations extend to places like Ethiopia where this wave of imported surveillance technology has also aided in targeting independent voices.

Ethiopia’s hybridized surveillance apparatus reveals the state’s capacity to do patchwork with diversely sourced technology. The government has acquired monitoring tools through commercially available spyware. Namely, the UK and German-based Gamma International FinFishers, Cyberbit an Israel-based cybersecurity company, and the Italian based Hacking Team’s Remote-Control System. These apparatuses extend Ethiopia’s surveillance capacities, and effectively enable access to files on targeted laptops. They also log keystrokes and passwords as a way to turn on webcams and microphones as a means to make them spy gadgets. These tools run on Chinese funded Information and Communications Technology (ICT) systems. Such trends present a challenge to the future of privacy and the prospect of democratic politics in Ethiopia—and beyond.

Ethiopia, as a nation seeking development, is instructive for its novel approaches to ICT systems and its collaboration with the Chinese state. Ethiopia is notorious for its low levels of internet penetration. Yet, with the help of China, it has charted new avenues of ICT development and changed the country’s modes of governance. That is to say, it has championed the use of ICT mechanisms as instruments of development. These apparatuses have empowered development, but also the means, like Zimbabwe, to bolster suppressive practices. In other words, Chinese support has enabled the Ethiopian government to increase internet access while maintaining Addis Ababa’s callousness towards freedom of information.

For Ethiopia, and other African states, the purchase of spyware and the implementation of ICTs, with foreign support, raises pointed concerns. Regardless of whether China is thought to be an active teacher that purposefully exports its anti-democratic developmental strategies, Ethiopia’s weak rule of law, poor record of internet freedom, and limited independent oversight over government programs means that technologies are likely to be abused. A techno-dystopian future is more likely if African governments and publics continue to overlook the current crisis. Digital authoritarianism, in Africa and beyond, is on the rise. Securing data privacy and internet freedom against these novel forms of repression is fundamental to preserving our rights and fragile experiments in democracy. 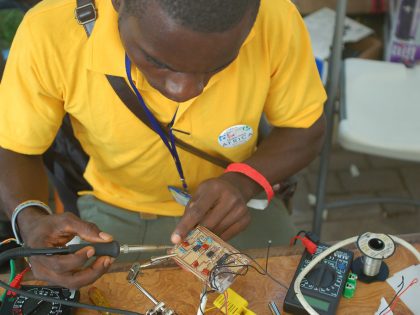 How to change the erroneous perception of Africa as technology backwater. Go look, for example, at what the “Maker Movement” is doing in Ghana and Nigeria.