There is a luminous anecdote in the memoirs of the Egyptian Marxist Samir Amin, who died August 12, 2018. At age six, he was with his family in the city of Port Said. He saw a child picking up garbage from the street to eat. Why, he asked his mother, was the boy doing that? “Because the society we have is bad,” said his mother. “Then I’ll change society,” Amin answered.

Amin was born in 1931 in Egypt to an Egyptian father and French mother. He later studied in Paris, including under the radical structuralist economist Francois Perroux, and defended a dissertation in 1957 dissecting and anatomizing then-modish theories of development and economics, from modernization theory to marginalism. He substituted for such social science fiction an inherently hierarchical and inherently global world-system—one which rested on enfolding, shackling, looting, and stunting what came to be the colonial world and then the periphery.

From there, he plunged into the nuts-and-bolts of planning in populist governments of the Third World. He worked for the Egyptian government from 1957-1960 and in Mali from 1960-1963. From 1963-1970 he was in Dakar, at the Institut Africain de Développement Économique et de Planification (IDEP), a pan-African institution meant to train and deepen the knowledge base in development planning of post-colonial African technical attaches, bureaucrats, and leaders. He left IDEP and founded the Third World Forum, which took shape in 1973, and was a network of intellectuals spanning Africa, Latin America, and Asia. The Forum was another effort to provide intellectual space for interchange around anti-systemic developmental thought, and scaffolding for research programs. Since then, Amin was involved and in supporting roles with radical movements across the Tri-Continental arena.

Amin’s contributions to historical social science—and revolutionary theory—span an almost boggling breadth. His masterwork, eventually published as Accumulation on a World Scale, was a revision of his doctoral thesis. He mapped the mechanisms through which value flowed from South to North, maintaining an international division of labor and a geographically uneven distribution of wealth and want. Avant la lettre, he clarified that the core-periphery distinction was based on uneven levels of development through value extraction, and not any specific technical pattern of production. Heavy industrialization did not need to mean development. In this work, he was a forerunner and a parallel founder of the most novel approach to advancing Leninist and Luxembourgist analyses of imperialism: dependency theory.

Based on this conception, he put forth a radically novel notion: delinking. Pilloried and misinterpreted by Eurocentric Marxists and modernizers alike, Amin argued that insofar as Third World social formations accepted their subservient incorporation into global capitalism, they would remain underdeveloped. He did not write a brief for autarky. Instead, he argued for countries to develop their productive systems according to a popular law of value and through popular participation. They would decide how much industry, how much agriculture, and what techniques ought to be used in each sector. In this way, rather than peripheries passively accepting the adjustments imposed by the capitalist core, they would decide on the shape and pattern of their relationship to the world trading system. The core would adjust to the periphery rather than the periphery adjusting to the core.

The Bandung moment, the Rise of the South, was a political mooring point. Although he was acutely aware from direct study of the limits and constraints of post-colonial developmentalism, he was equally aware as he saw unfolding in front of his eyes a movement towards the re-assertion of the sovereignty and dignity of the Third World after the calamity of colonialism. The Rise of the South sought to demolish politically what Amin aimed to eradicate intellectually through his book Eurocentrism, where he deconstructed the mythology of European centrality to world culture, and how supremacist myth justified the material ambitions of Euro-American capitalism.

Amin looked askance on one after another fad emerging from the intellectual factories of the First World, especially the post-USSR negation of the category of imperialism. Michael Hardt and Antonio Negri’s replacement of imperialism with an amorphous everywhere-nowhere empire and their twinned replacement of worker with “multitude” were one example. Amin saw imperialism alive if not exactly well, and its underbelly, a shapeshifting process of primitive accumulation and folding peripheral workers into the law of value, equally omnipresent.

Amin’s influence on the continent of his birth especially was enormous. In Dakar he was in constant exchange with radical economists and the luminaries of the left, in Africa and elsewhere. He used IDEP’s infrastructure to host the earliest versions of CODESRIA, the premier continental academic association headquartered in Dakar, which became a central point for the rejuvenation of African social science. In the Middle East he was a touchstone of debates on independent development, and in the Maghreb his work was central to studies of dependency.

His work and vision did not ossify as he aged. He was directly involved with the World Social Forum process. As the 90s turned to the 2000s and the 2010s, he turned his attention to the ecological destruction wrought by monopoly capitalism, its inability to resolve the climate crisis, and the need for a socialist alternative. He warmed to and supported the movements clustering around the slogan of food sovereignty, as an important component of a broader anti-systemic project.

Although Amin has left this world, like a dying star the path ahead remains illuminated by the brilliant light he cast, and will remain so for some time to come. What remains is to walk it. 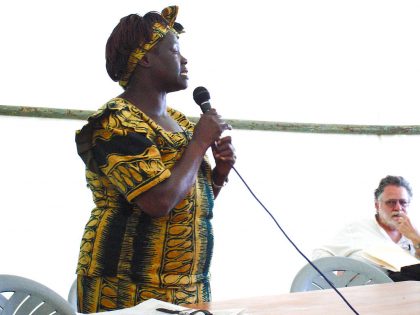 Maathai, who died this week, stood up to the dictatorship of Daniel Arap Moi, and the global regimes of the IMF, the World Bank and all the rest.