200 Jamaican dollars [US$2.00] can get you a flag of any of the competing nations in the FIFA 2018 World Cup on the streets of Kingston. Some have flexible white plastic poles anchored by suctions that allow fans to proudly display their favorites from the roofs of their vehicles. Most will spend their short lives loosely fitted with cellophane tape to radio antennae or bonnets or simply splayed across dashboards. The delicate dance of the players looking for passage to their netted destination on pitches across Russia now has parody on Jamaica’s busiest streets, as Argentina taxis zig-zag their way in between muscular French SUVs and mid-sized German panel vans. Jamaicans are a football obsessive people and flag displays indicate just how far that devotion runs. Some of the Chinese-made flags were fluttering worn and weary by day two of the tournament.

Flag love can betray the progress of the competition. German flags have all but disappeared after being seen in profusion in the clutch of stoplight sellers as early as May. Those who live in denial still keep their Argentina flags close to hand. And then there are the wagonists, those whose football patriotism—and flags—change with the outcome of each fixture.

Wagonists and displaced nationals alike save their most demonstrative love for Brazil. Brazilian flags outnumber all the others by a considerable margin. Some motorists display up to four or more flags on their vehicles, in the spokes of motorcycle wheels and aloft their roadside cook shops. The real obsessives go even further. Shirts, wrist-bands, jerseys, wigs; you name it. Someone has fashioned something out of the Bandeira. It helps that Brazil’s colors are close to the Jamaican black, gold and green. The colors all blend naturally in the hot blue summer.

Jamaican devotion to The Golden Squad runs deep into twentieth century past. If one could date it, it would be the 24th of June 1958. On that warm night Jamaicans pricked their ears to scratchy radios to hear British commentary of a 17 year old wizard simply named Pele, deftly dribbling past the French defense and into the history books. They had to imagine what his play looked like. TV was still a few years into the future. Pele was collectively formed out of voice and emotion. His hat trick and the rush of ecstasy that poured through the speakers and into the Jamaican imagination made him from the first unworldly. Above all these black British subjects—Jamaica was still a colony then, four years away from independence— celebrated the dazzle that emitted from black feet drifting through European columns. From then Brazil became fused with Jamaica for enchanted football lovers.

Those with long memories remember well when the man himself played in Jamaica in the fall of 1975. It was his second visit to the island. Pele was then a member of the New York Cosmos and the beautiful game’s most revered ambassador. His easy smile, which always made him seem as if he was your best friend even if you had never met him, won over Jamaicans. It cleverly camouflaged his natural talent filed sharp by relentless practice. In his mid-thirties he may have been past his prime but still regarded as the greatest footballer of all time.

Pele’s 1975 trip to Jamaica was one of several goodwill tours with the Cosmos. Before Kingston he played two games in Haiti, another Caribbean place that sees Brazil whenever it looks in the mirror. Jamaicans gave the king a hero’s welcome. From the airport, where he arrived on private jet, he went to visit Prime Minister Michael Manley, passing lines of adoring fans along the way. He met the press and public afterwards where an awestruck young fan asked, him, “Is there any footballer greater than you?” Pele’s response: “Only one, my father.”

The match, which took place on the night of September 21, was billed as the “Battle of the Giants.” Pele led the Cosmos on one side. On the other, Jamaica’s giant: Alan Cole. A legend in his time, Cole had earned his stripes as a magical schoolboy player and then an astonishing club forward. His talents were enormous. Cole had an unmatchable ability to read plays before they occurred, and was always in total command of the field. He had also reached further than any other Jamaican footballer of his generation. Cole had experience in the North American league in the late sixties. In 1972-73 he briefly played for Nautico in Brazil alongside Marinho, Brazil’s star left back of the 1974 World Cup. Cole could have gone further still but decided to return home. He helmed Jamaica’s Santos FC when they first met Pele on home turf in 1971. He was only 21 years old then. More mature, seasoned, and famous in 1975, ‘Skill’ as he was popularly known, was the “Golden Pearl” to Pele’s “Black Pearl.”

The thousands of Jamaican fans who filled up the seats in the National Stadium believed they were seeing the closest thing they would ever experience to a World Cup match. The roar that greeted Pele and Cole when they touched the field was deafening. For all its hype the game was lackluster. The King was not in fine form, nor was his team. An hour into the game Pele, predictably, fell victim to a hard tackle.  He limped off the field, leaving fans to endure the rest of an aimless game that saw Santos take the trophy with a 1-0 scoreline.

None of this did anything to daunt Jamaican attachment to Brazilian football. In fact it expanded after that. The 1978 and 1982 World Cup squads were lionized. Schoolboys could recite on the spot the names of every player on the selação and their positions. Parents passed their Brazilian devotion unto their children. Some even named their sons after the players, spawning a generation of Éders, Zicos, and much later, Ronaldos. Even Bob Marley, a renown football fanatic, player, and Skill Cole’s close friend, proclaimed to the world his “Jamaicanness” by wearing a Brazil team jersey onstage.

Jamaicans, to be sure, are not blind followers. They cursed in between winces at the team’s destruction by Germany on home soil in 2014, a leveling all true fans would rather forget. They cheer on African teams every four years. They rallied behind homeboy John Barnes who played for England in 1986 and 1990. They chanted loudly for their own Reggae Boys squad in 1998 and Trinidad and Tobago’s Soca Warriors in 2006. This is more than national, Caribbean or racial pride. It is the eternal thrill that comes from holding breath for the victory of the formerly ruled over their former rulers. Few expect other black teams to advance past the first round, so they also expect the first round infatuation to fade fast. Brazil, always counted among the formerly ruled, has supplied more victories than any other side: five wins and it is today the leading goal scoring nation in the tournament’s history. This legacy strengthens the bond Jamaicans have with Brazil.

In World Cup 2018, the most unpredictable contest in recent memory, teams and their flags come and go but Brazil love reigns supreme in Jamaica. Overheard in a local restaurant was the opinion of a young man who decided he would champion an underdog nation for no other reason than as an act of rebellion. Supporting Brazil, he said, would be “too Jamaican.”

Brazil’s advance to the quarter finals after its victory against Mexico—the team’s most impressive performance so far in the tournament—may turn those like him back to their Jamaican roots. Hours after the win Jamaicans on the capital’s streets were beating their chests assuring that this year “tek we a go tek it home” (we will be bringing the Cup back “home”).

This week, Kingston’s street sellers are stocking up on Brazilian flags knowing they will sell faster than patties now. The quarter-final match with Belgium on Friday, July 6, will be tense and may even be surprising. Win or lose in the long view it will provide another occasion for Jamaicans to gather together in the middle of a busy day to cross their fingers, smile, hug each other, stay off the streets, text friends abroad, talk to strangers, cancel appointments, drink a Red Stripe, outwax the commentators, dance, sing and wave their flags. On this island, which is always in need of healthy distraction, football is King and everyone at heart is a Brazilian. 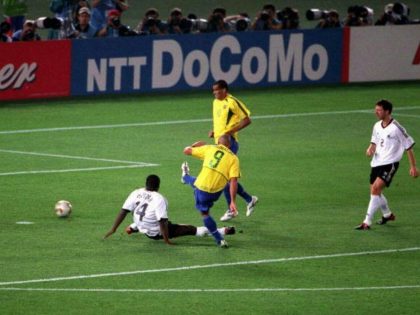 When Germany played Brazil in the 2002 World Cup final, who would French fans in Paris root for? 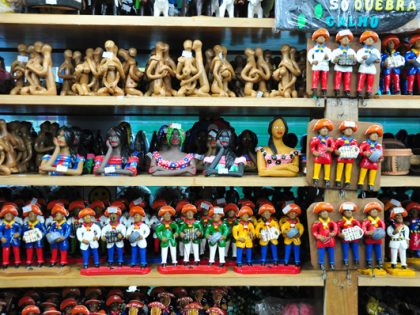 I’ve never been to the Northeast of Brazil, but I have paid R$5 to walk through the doors of the Feria Nordestina in Rio de Janeiro’s North Zone. Doing so, one clearly realizes they’ve entered …